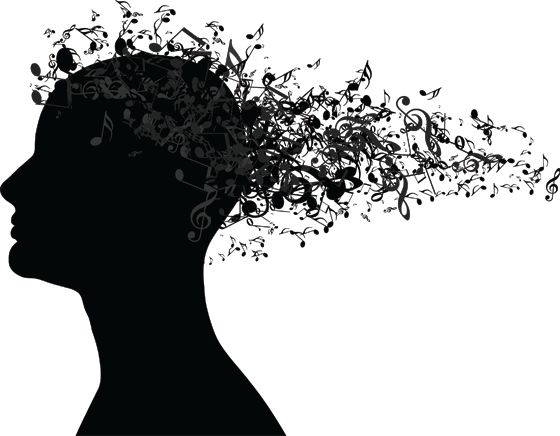 When I was a child, I loved The Rescuers – a Disney movie about two mice who rescue a kidnapped girl. It had everything a five-year old animal lover could want – drama, intrigue and heroic cute animals. But it had something else I loved: a song called “Evinrude,” composed by Artie Butler (who, as a side note, played keyboards on the Shangri-Las “Leader of the Pack”). Here’s a link to a video for the song “Evinrude.” You might want to listen to it several times for full effect.

I also had the “Rescuers” story book and 45 RPM record. I would play “Evinrude,” and as soon as the song ended, I would drop the needle back to the start and play it again. And again, and again...until my mother instructed me to “knock it off.” I was perfectly happy but I’m sure it was giving her a headache. Years later, I still find that when I really love a song, I can listen to it over and over again.

Not only do I like listening to songs repeatedly, I experience what is known as “Involuntary musical imagery (INMI),” or stuck song syndrome. Typically, if I am awake, there is a song “in my head” – often it’s an annoying song, but sometimes it’s one of those songs I have listened to a lot. But I never really thought too much about the songs stuck in my head, until I found out that other people experience them too and that scientists are actually studying this cognitive phenomenon.

So what do scientists know about these pesky “earworms”? Let’s take a closer look.

Musicians are more prone to earworms. Photo by Luke G via Flickr/Creative Commons.[/caption]

Around 90 percent of people surveyed experienced earworms at least once a week, with over 25% reporting experiencing INMI several times a day (I would be in that category). While earworms might be annoying, most people who experience them report that they are pleasant or at least neutral. Only a third of people are disturbed by the song in their head.

Musicians or those who report music is an important part of their life are more likely to have frequent earworms. It makes sense that musicians may be more prone to earworms; part of perfecting one’s skills at a musical instrument is repetition. And perhaps those music lovers are like me, listening to their favorite tunes over and over.

Are earworms related to mental disorders? One study found that those who worried about their earworms tended to score higher on a measure of schizotypy, which is often described as a “mild form” of schizophrenia. Schizotypy includes a spectrum of symptoms such as magical thinking, introversion and getting lost in one’s thoughts. Schizotypy may also make it difficult to inhibit thoughts, and earworms could be part of a larger lack of “cognitive control.”

However, two case studies of those with “musical obsessions” found that neuroleptic (anti-psychotic) medication had no effect on earworms, suggesting that these cognitive tunes are not driven by schizophrenic symptoms. Some have speculated that earworms may share commonalities with obsessive compulsive disorder (OCD) as INMI could be considered a form of “intrusive thoughts.” The efficacy of clomapramine on reducing the earworms in this study suggests a possible relation between earworms and OCD.

What earworms do NOT seem to be related to is your personality. One study found no relation between personality traits (Openness, Conscientiousness, Extraversion, Agreeableness or Neuroticism) and frequency of earworms, although perhaps not surprisingly, those who scored highly on Neuroticism tend to worry about their earworms more than others.

What’s in the earworm?

Earworms often take the form of song fragments rather than entire songs, and the song is usually a familiar one. Recent or repeated exposure to a song or even a snippet of a song can trigger earworms, as can word associations, such as a phrase similar to lyrics of a song. In an interview study one woman reported:

"On my journey, I read a number plate on a car that ended in the letters 'EYC' which is NOTHING LIKE 'PYT' (by Michael Jackson), but for some unknown reason, there it was - the song was in my head."

Michael Jackson songs were reported more prevalently as earworms when his doctor was on trial and frequently mentioned in the news.

Are some songs more likely to become earworms than others?

Yes. Chili’s “Baby Back Ribs,” the Village People’s YMCA and Baha Men's cover of “Who Let the Dogs Out” were reported by multiple students in one study which also reported that Lady Gaga and the Beatles are often stuck in people’s minds. In another study “American Pie,” ”Suspicious Minds,” “Waterloo,” and “Lovely Day” were all repeat offenders.

So you’ve got an earworm, now what?

One question is whether it is helpful to “try” to get rid of the stuck song, or if the sufferer should just let the tune go away of its own accord. That’s exactly what one study sought to determine (“Sticky Tunes: How Do People React to Involuntary Musical Imagery?”). Williamson et al. surveyed a broad sample of Finnish and British citizens about their experiences with earworms. The results were recently published in PLOS|ONE.

How people cope with their earworms seems to depend on how they feel about them. Those who had positive feelings about their stuck songs prefer to just “let them be,” while those with negative feelings turn to more behavioral responses, which include coping strategies such as musical distractions (singing or listening to other music), talking or even prayer. Some INMI “sufferers” sadly choose to ignore music altogether to avoid stuck song syndrome.

Listening to other songs is a coping strategy for some who experience Involuntary Musical Imagery. Photo by Jose Oller via Flickr/Creative Commons.[/caption]

Many people noted that they have a “Cure” song (note, not a song by the band the Cure) that helps them get rid of earworms. Sixty-four different songs were named, but six songs were named by multiple participants: “Happy Birthday,” ”God Save the Queen” (unfortunately not the Sex Pistols version), Led Zeppelin’s “Kashmir,” Culture Club’s “Karma Chameleon,” Peter Gabriel’s “Sledgehammer,” and the theme for the television program The A-Team. These songs apparently stop the INMI without becoming an earworm themselves.

Others found that engaging with the stuck song was the best way to cure the earworm. By listening to the song, some participants found that they could “complete” the song fragments, allowing the stuck song to dissipate, but this technique usually requires repeated listens.

The future of earworm science

Earworms are a relatively new field of study, and there are still many unanswered questions. I wonder now if the repetitive listening to “Evinrude” was a sign of things to come, or was it my own attempt to control the music in my head? I’d love to know if other earworm sufferers enjoy listening to music repetitively like I do.

People are also recognizing the power of earworms (I think commercial jingle writers have been doing so for years!) for other purposes. Now, you can even learn a language using a program developed based on sticky tunes, using song lyrics and cheesy music to help you remember that “How’s it going” in German is "Wie geht's".

If you’d like to contribute to a better understanding of stuck songs, you can participate in an ongoing study of earworms here at Earwormery.

What are your personal earworms?

Here are some of mine:

Floridou, G. A., Williamson, V. J. & Müllensiefen, D. 2012. Contracting earworms: The roles of personality and musicality. In: Proceedings of the 12th International Conference on Music Perception and Cognition and the 8th Triennial Conference of the European Society for the Cognitive Sciences Of Music, Thessaloniki, Greece, pp. 516-518.