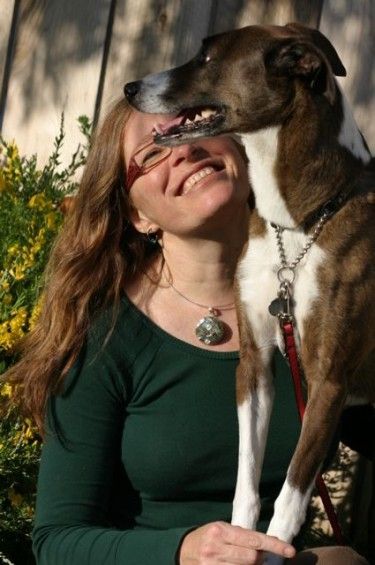 Amy Cook with one of her dogs.[/caption]

Amy had always had a “personal obsession” with animals, but she felt particularly in tune with dogs, and started informally training dogs in the 1990s. Walking her dogs to the park were almost everyday was a normal thing - it became a habit that she could write a series of books regarding proper manners when you bring your dogs to the park. She have been fascinated by how dogs are particularly adapted to live with humans. Adopting a dog with special needs opened her eyes to the complexity of animal behavior. “I thought I could train any dog…but then I realized, I didn’t know what the hell I was doing. I knew how to train dogs to do stuff, but this dog had severe anxiety – she was afraid of people, the outdoors, everything.” That was when Amy became interested in more sophisticated behavior modification techniques. She attended the renowned San Francisco SPCA Academy for Dog Training, and then received her Bachelor’s Degree in Psychology from Mills College. At the time, Amy didn’t consider attending graduate school, and instead founded her business Full Circle Dog Training. She worked with dogs for almost another decade before finding herself with the opportunity to study dog behavior on a more formal, theoretical level, as a graduate student with Dr. Jacobs.

Amy’s first research project at Berkeley was a collaboration with Anna Waismeyer and Alison Gopnik examining causal inference in dogs. Causal inference is the ability to reason that one thing is the cause of something else, for example that pushing a doorbell causes a ringing tone in your house. While humans do this easily, the ability of other animals to do this is still an open question.

The study explored whether dogs could put together what they learned from classical and operant conditioning, something humans do very easily. Classical conditioning is learning an association between a previously neutral stimulus and an unconditioned stimulus that elicits an unlearned response. Classical conditioning is perhaps most famously associated with Pavlov’s dogs, who started salivating (the unlearned response) when they saw the technician (the previously neutral stimulus) who regularly brought them their food (unconditioned stimulus).

Operant conditioning, on the other hand, is the association of behavior in the presence of a stimulus with a particular outcome (reinforcement or punishment); for example, in Thorndike’s studies of cats in a puzzle box, cats learned that pressing a lever (the behavior) would release them from the box and allow them to access food (reinforcement). Over time, the cats were able to escape from the box more quickly as the association between lever pressing and kitty freedom was strengthened.

In the Berkeley experiment, dogs observed that a human could push a button on a machine to make a sound. Then the dogs learned that the sound alone predicted the delivery of food. The question: could dogs figure out that THEY could push the button on the machine to make the sound and get food? The answer: no. “The dogs would look at the machine, and at the experimenter, but they couldn’t put the pieces together.” The dogs could be trained to push the button to get food in one or two trials, but they couldn’t figure out how to do this without being directly trained to do so. The experiment was repeated with children, and results indicated that four year old humans, but not three year olds, could easily learn this. A manuscript of the study is currently under review.

For her dissertation research, Amy looked at different aspects of the relationship between dogs and humans. In particular, she decided to expand the growing field of research looking at how dogs respond to human gestures (such as the human pointing gesture). Why is this behavior in dogs so important? “Previous research converged on the fact that dogs could take information from human cues, and that chimpanzees could not.” This result was surprising because chimps are closely related to us, and have arms and fingers, and could reasonably be using these gestures themselves.

Several researchers have studied the dog’s comprehension of the human point, exploring various permutations of the experiments to understand what this behavior means. What counts as a point? Would dogs respond to a leg point, or an elbow or even the gestures of a robot? How long does the human have to point? What if they stop pointing while the dog is watching?

Conventional methods by other researchers would have a single person point at one of two containers, one of which would have food in it. Researchers then measured whether the dog chose the container that the human was pointing to (regardless of whether it had food in it or not). They might compare how dogs did with a stranger and then later how they responded to a familiar person. In general, dogs do very well at this task, often even performing at ceiling---and in general, always following the human point, whether a stranger or a familiar human, and whether the human is pointing to a container with food or not.

The experimental set up for the two-pointer paradigm.[/caption]

Amy’s research diverged from previous studies by introducing the double-pointer paradigm. This design forced the participating dog to choose between two humans who were simultaneously pointing at containers, one of which had food in it. Her reasoning behind this methodology was, “We get that you understand human cues. But do you care who is giving them? We know dogs can do this, but there might be more to it than just the physical appearance of the cue.”

The study included 30 dog-owner pairs. First dogs were allowed to explore the testing space, and trained to flip over both plastic containers to get a food treat. Then the dogs were assigned to one of three two-person pointing conditions: owner-correct (meaning the owner’s container had food in it); stranger-correct; and two-strangers pointing, where neither person was familiar to the dog. There were also two control conditions, one where the two humans (one of them the owner) just stood near the containers but didn’t point; or a “reading” condition, where both the owner and stranger read books, ignoring the dog, with the containers nearby. To control for scent, both containers contained a food treat, but only one container had a hole on the bottom where the food treat could be released when the dog flipped it over.

Amy posits that what may be going on is “something more akin to dependency. When we are alone, we solve problems according to whatever strategy occurs to us. But when a problem comes up and two people are involved, it changes what you do. You take the other into consideration. Dogs might be taking the familiar human’s information into consideration.” Unlike wolves and cats, “Dogs use sociality (or animal communication) as an option to solve a problem. Regardless of the fact that dogs will respond to any human point, they prefer what a familiar person tells them over a stranger.”

Amy Cook: "What I would like most is for dogs to be seen accurately, not as what we wish or think.”[/caption]

Since earning her Ph.D., Amy has been teaching the Introduction to Psychology class and the Psychology Department’s Graduate Seminar on pedagogy at Berkeley. She currently teaches on-line learning theory courses at the Fenzi Dog Sports Academy, in addition to her private business where she does puppy training, loose leash walking, and behavior consulting for dog owners. She hopes to pursue research that will encourage humane treatment of animals, influencing people to see their animals honestly. “It’s not good for dogs to not be seen as exactly who they are,” Cook asserts, “What I would like most is for dogs to be seen accurately, not as what we wish or think.”

The study, “My owner, right or wrong: The effect of familiarity on the domestic dog’s behavior in a food-choice task,” co-authored with collaborators Jennifer Arter and Lucia Jacobs, was recently published in the journal Animal Cognition.