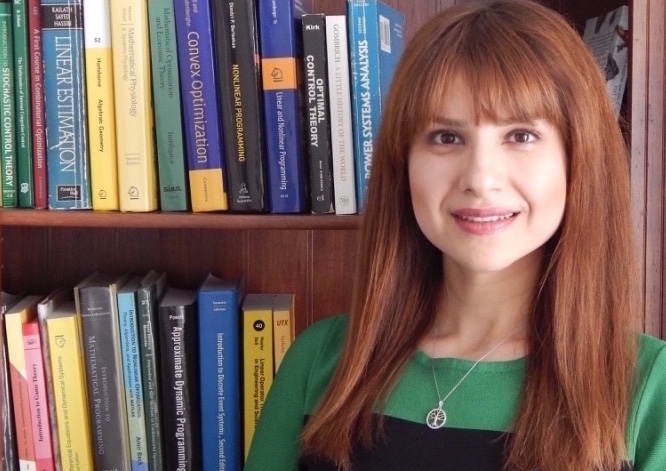 Somayeh Sojoudi is an assistant professor in Electrical Engineering and Computer Sciences (EECS) and Mechanical Engineering at UC Berkeley. She earned her bachelor’s degree in Electrical Engineering from Shahed University (in Tehran, Iran), her master’s degree in ECE from Concordia University, and her PhD in Control and Dynamical Systems from Caltech. After earning her PhD, she worked as a researcher at NYU Langone Medical Center before coming to Berkeley as an assistant professor. Her research focuses on problems in optimization, algorithms, control theory, and more, with a variety of applications. Her work, including research on power systems and applications to large-scale networks, has made a notable impact and received many awards.

Amanda Glazer (AG): How did you first get interested in engineering?

Somayeh Sojoudi (SS): Growing up, as far as I can remember, I was always very interested in how things work, from radio, to TV, to phones, and so on and so forth. Back then, I really didn’t know how things worked, but later on I learned about circuits, signals, and so on. I remember when I was in school, I was interested in so many different subjects, from chemistry to physics to biology to mathematics. In middle school I wanted to be a medical doctor, and at the same, time I was interested in engineering, so I thought maybe bioengineering would be an ideal choice for me. But when I went to high school, my interest in math grew and I fell in love with calculus and geometry, so I did a little bit of research, and I realized that electrical engineering would technically expose me to a broader set of engineering applications, and that’s how I chose to go into electrical engineering.

As an undergrad, I chose to focus on electronics. I was really interested in the subject, and at the same time, I liked control theory. Since there were more courses being offered in electronics, I decided to major in electronics. After finishing my undergrad, I moved to Canada to pursue a master’s degree. I remember I was struggling to choose between control and electronics for my master’s. Technically my experience with control theory was more limited than electronics, so to make an informed decision I started reading different advanced books in control theory. I fell in love with the topic. Control theory has a really rich mathematical foundation and has a broad set of applications, from controlling cars and airplanes to systems biology, and that’s how I chose to major in control theory. I am really happy with the decision that I made. After getting my master’s I went to CalTech for my PhD, and I had the privilege to work with some pioneers of modern control theory in Control and Dynamical Systems (CDS). What was really special about CDS was their emphasis on doing groundbreaking research that is interdisciplinary and broad. That’s how I started working on theoretical aspects of control theory and optimization together with their applications in power systems, communication networks and medicine.

How would you explain what control theory is?

Control theory is about modelling dynamical systems and controlling the input to the system based on the measurements taken from the system to achieve some goals.

What were you doing at the NYU Langone Medical Center? Is it similar to the work you do now?

During the last year of my PhD I got involved in a project that was at the intersection of neuroscience, optimization, and machine learning. That’s how I ended up spending some time at NYU Medical School working with neurologists and neuroscientists to use some of those algorithms for studying epilepsy and some other neurological disorders. After that, I came to Berkeley and continued working on some of those algorithms. With my group members, we developed some computational tools that are capable of solving very large-scale problems, with millions of parameters (as is the case for network analysis in the brain), on a standard laptop in a few hours. That got major technical awards and a lot of attention from different research communities.

This was for solving what kind of problem?

Did this connect back to the epilepsy research?

In epilepsy research, we want to see how the brain of a patient that is suffering from epilepsy is different from healthy subjects. One way of studying that is seeing how the brain’s neural interactions are different in epilepsy patients compared to the cases that are healthy.

How did you decide to come to Berkeley?

I’ve always wanted to be in academia. I feel like academia gives me the opportunity to work with bright students and postdocs on any project that I like, at any pace that I choose. It’s important to have the flexibility on the pace of the project development because that allows me to work at a much deeper level, given all the uncertainties and challenges being faced during the project. Once the project is ready and it’s time, I go to industry and talk to my colleagues in industry about how I can implement those ideas and techniques. That’s one of the reasons why I always wanted to be in academia.

Did you ever consider working in industry instead of academia?

No, not really. I’ve never considered working in industry, but every time the products and ideas from my research are ripe and ready, I go to colleagues in industry and explore possible paths for collaboration and implementation of our work.

So you kind of get the best of both worlds?

What are some of the projects you are working on right now that you are excited about?

First, just to give you a little more background on my research—we are living in an era where almost every system is getting smarter. The legacy power grid is changing to smart grid to have more sustainability and resiliency. Another example is smart transportation systems that aim to enable the dream of driverless cars and automated highways. More generally, we are moving towards smart cities with so many sensors, so much data to process, and many decisions to be made in real time. If you want to operate a smart city, the operation heavily relies on computational tools. Because of that, we need to have computational tools that are reliable and efficient so that they can be used for safety-critical applications like transportation and energy. With that in mind, my research has been really motivated and focused on designing algorithms that are efficient. We come up with a set of computational methods with provable guarantees so that they can be used for safety-critical applications. Currently my group is working on different algorithms for various purposes, with a special focus on non-convex optimization. There is a wide range of applications for these algorithms, from power systems to machine learning.

How have you seen these techniques implemented?

Some work that I have done, in collaboration with my colleagues, has been on revolutionizing the power systems operation based on new advanced optimization techniques. The way the traditional power grid operates is based on solving an optimization problem that has to be solved every five minutes. But power system practitioners solve the problem using heuristics due to its high dimension and high computational complexity. Our study showed that by designing sophisticated optimization techniques, we can have a huge impact on the power system industry by saving billions of dollars annually through a more cost-effective operation and by enabling a safe operation of the system under a high penetration of renewable energy. This is a big deal. We got a lot of attention from the power system industry but its implementation needs going through the states to federal government and there are so many regulations and rules that play a huge role in the process. So, for this type of research, implementation takes a number of years because it has to go through several layers. But I’m really happy that several big steps have already been taken and we are getting closer to implementing some of these algorithms.

What’s one of your accomplishments that you are most proud of?

One of the projects that I’m really proud of is our work on power systems that has initiated a lot of activities in both academia and industry.  This work has huge societal impact. I think it’s really fun to work on projects where you see how it can help impact lives. That’s something that I’m proud of.

What does a typical day look like for you?

During the week I am very busy with doing research, teaching, holding office hours, editorial activities, etc. I’m on the editorial board of three different journals. I meet with my group members individually every week and then we have a weekly group meeting where one of the group members presents their results to the rest of the group.

What does your work for the editorial boards look like?

The main responsibility is to evaluate the papers, assign them to qualified peers for reviews, and make a publication decision about whether the paper should be accepted or revised or so on.

How big is your research group?

Currently I have six PhD students and two postdocs in my group. I also had a postdoc who started his faculty job at Columbia University this fall.

The core of my research is computation, algorithms, and optimization techniques. My students are more or less working on different projects on these topics. They work on both the foundation of computation/algorithms/optimization and various applications. I have an interdisciplinary research group.

What is your teaching philosophy?

My teaching philosophy is that once you teach a course, you learn the material at a much deeper and more fundamental level, and this is one of the most rewarding parts of being in academia, especially if you have the chance to teach a course that is related to your research. I am co-teaching a course on convex optimization in electrical engineering. It’s a graduate-level course. I’m really excited about the fact that I have the opportunity to share my passion for optimization with our bright PhD students at Berkeley. Another course that I teach is an undergraduate course on feedback control systems. That’s where students learn about modeling dynamical systems and designing controllers for such systems.

What’s a piece of helpful advice you were given or have given?

One piece of advice that has been very important for me is to try to learn something new every day. Also, I think it’s really nice to try to improve our problem-solving skills. Mathematics is fun and helps with improving clarity of thought. That’s something that I really like.

How many salmon will it take to save the ecosystem? Previous
The Berkeley Science Review at Cal Week Next