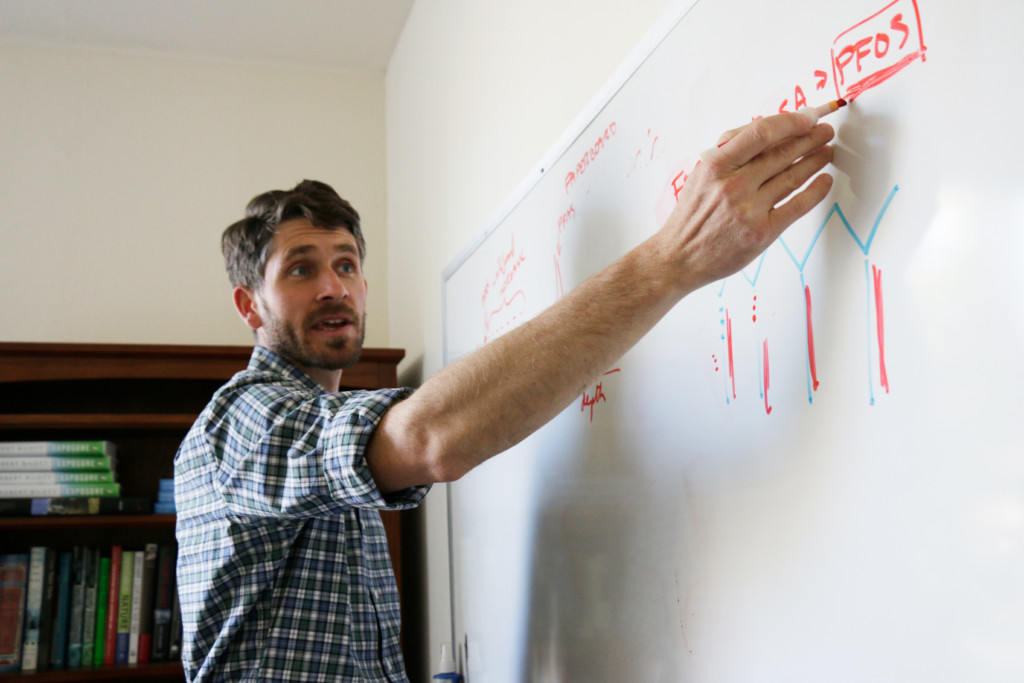 While working on his dissertation at the UC Berkeley School of Environmental Engineering, Tom Bruton had high hopes for developing a groundbreaking technology to break down toxic chemicals in groundwater. But in 2017, after years of painstaking development, his method proved less than effective.

“The big takeaway was that prevention, not clean-up, is our best bet for reducing toxins,” Bruton said.

Now, two years later, Bruton is a champion of toxics prevention in his role as senior scientist at the Berkeley-based Green Science Policy Institute, founded by UC Berkeley Research Associate in Chemistry Arlene Blum. Bruton met Blum on campus in 2015 during his dissertation research, and began working for her while still a student. When Bruton graduated, Blum hired him full time. Bruton specializes in PFAS, per and polyfluoroalkyl substances, a class of toxic chemicals found in countless consumer and industrial products. As the sole PFAS expert on a team of just four scientists, Bruton helms research projects and communicates findings to lawmakers, non-profits, and industry leaders worldwide.

“PFAS are a large and quite complicated class of compounds,” said Blum. “Tom can explain them really well to scientists and non-scientists alike.”

PFAS, chemicals first developed in the 1940s, gained widespread use in commercial products for their stain-resistant, non-stick, waterproof, and flame-retardant properties. They’re in our homes and running from our taps, covering our couches and clothes, and draining from industrial sites to our groundwater. Known as “forever chemicals,” once PFAS enter the environment, they will persist on a geological timescale.

PFAS are also toxic: multiple toxicological and epidemiological studies have linked long-term exposure to cancers, autoimmune disorders, and other diseases. Bruton says PFAS are “notable for their immunotoxicity”: they enter the bloodstream and suppress the body’s immune response, increasing vulnerability to all disease. In 2017, Patrick Breysse, the Center for Disease Control’s Director of Environmental Health, called PFAS “one of the most seminal public health challenges” of the coming decades.

But the sheer ubiquity of PFAS across industries—from flame retardants to food packaging—makes them difficult to regulate.

“There’s so much out there, and so much we don’t know, we can’t study them quickly enough and end up leaving consumers exposed,” said Tasha Stoiber, Senior Scientist at the Environmental Working Group, a national environmental advocacy group.

To address the problem, Bruton and the Green Science Policy Institute take a systematic approach: research, press, and partnership. Tackling one industry at a time, they partner with academic institutions to test consumer products for contaminants, coordinate press around their findings, and communicate findings to policymakers.

For instance, in 2017, the Institute joined nine other scientists nationwide for a first-of-its-kind study of grease-resistant fast food packaging. The results, published in Environmental Science and Technology Letters, showed that of the 407 samples of paper and paperboard wrappers collected across five regions of the United States, over one-third contained PFAS. The Green Science Policy Institute coordinated a press campaign, and Bruton appeared on TV to explain the findings. Last year, San Francisco banned PFAS from takeout containers, and the state of Washington banned PFAS from packaged foods.

“We know that industry people are talking to lawmakers,” Bruton said. “We want to be the voice in the other ear, on the side of science.”

Bruton partners with industry leaders, too. In February 2019, he hosted a group of executives from the world’s biggest carpet companies at the Institute office in North Berkeley. Over a two-day workshop, executives heard from UC Berkeley scientists and state government officials about the hazards of PFAS used in stain- and soil-resistant carpet materials. Since the workshop, two leading carpet companies—Shaw and Engineered Floors—have gone public with a PFAS ban.

But with the ban of traditional PFAS come new varieties of the chemicals. In the past decade, the Environmental Protection Agency (EPA) has worked with many companies to phase out two common types: perfluorooctanoic acid and perfluorooctane sulfonate. In response, many companies replaced those compounds with structurally similar, but as-yet untested, alternatives. This trend toward “regrettable replacements” has led to over 5,000 types of PFAS in commercial use, according to EPA data. But lawmakers still focus on monitoring and regulating the dozen or so most widely known.

To address this ever-growing body of toxins, the Institute globalized their efforts. In 2014, they convinced the organizers of an environmental and analytic chemistry conference in Madrid to add a “Policy Day” to their program. Blum brought a statement urging policymakers to consider all PFAS compounds as a single class, rather than as separate chemicals regulated case-by-case. That day, over 250 independent scientists signed the statement. The resulting Madrid Statement was the first global scientific consensus on PFAS classification.

“You can achieve big things by being in the right place at the right time,” Bruton said.

In the past year, Bruton has felt hopeful that his efforts are gaining traction. Last month, Denmark became the first country to ban all PFAS from food packaging. This month, the US Congress is considering a bipartisan bill to phase out all PFAS—as a single class—from firefighting foams. In July, California Governor Gavin Newsom signed a bill that will make California the first state to require public utilities to notify the public about PFAS in their drinking water.

Still, Bruton is mindful of the pressure of conducting research with policy in mind. “This isn’t the typical research environment, where you’re in a vacuum separated from the real world,” he said.

“These issues are urgent, and we can’t have all of the answers fast enough.” 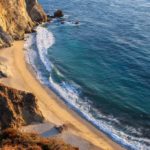 The Challenges and Opportunities of Offshore Energy:... Previous
Eat (y)our plastics! Next 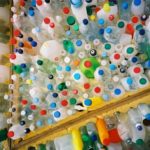