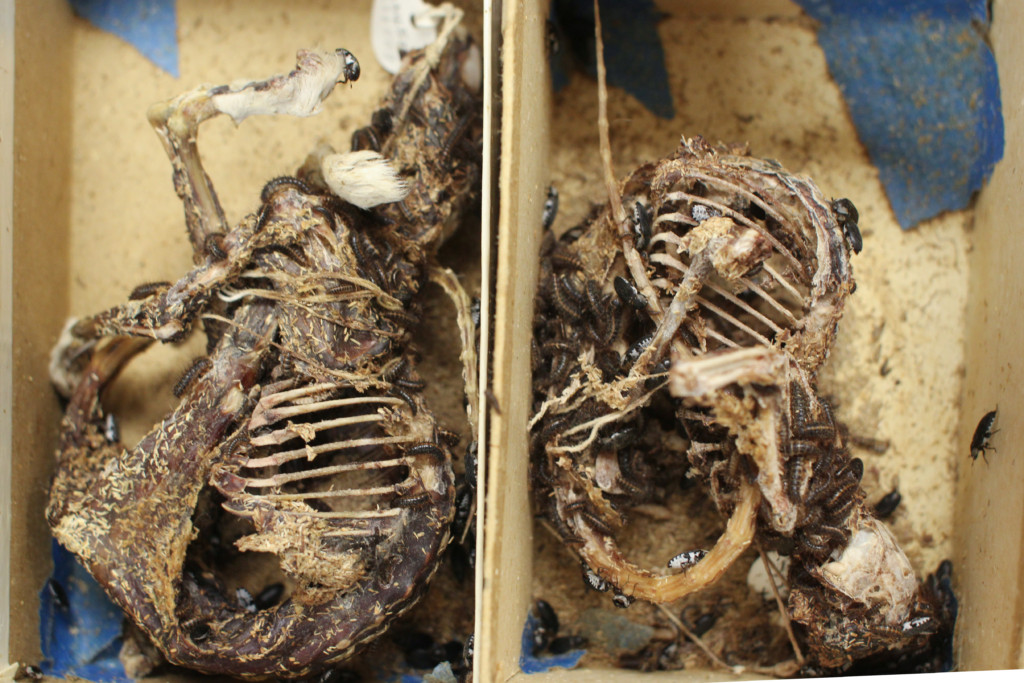 “You can take a closer look if you want,” says Terri Barclay, the skeletal and study skin preparation lab manager, as she takes the lid off an aquarium. At first glance, I only see the skeletal remains of dead rodents, but as I peer in closer, I see that they are teeming with life. Shiny beetles emerge from the eye socket of what was once a bird and black larvae crawl out of the rib cage, feeding on the remaining flesh. The beetles used for the skeletal preparations at the Museum of Vertebrate Zoology (MVZ) always seemed like an urban myth to me, but the MVZ is home to over 640,000 vertebrate specimens and one invertebrate species—dermestid beetles. Although these beetles may seem out of place among their vertebrate neighbors, they play a vital role in museum life—or rather, death.

Dermestes maculatus, or dermestid beetles, are used by many natural history museums to prepare skeletons by cleanly eating the flesh of dead specimens. Although there are other protocols for removing tissue from specimens, such as boiling or maceration—the removal of flesh with warm water and natural bacteria—the use of dermestid beetles continues to be the most efficient method for preparing skeletons. The method originated at Kansas University but was refined and made popular here at UC Berkeley. In fact, the three colonies maintained at the MVZ are descendants of a colony established at UC Berkeley in 1924.

An advantage of using dermestid beetles is that they require very little maintenance. The beetles are maintained in tanks or incubators at room temperature and, according to Barclay, “the process utilizes [the beetles’] natural behaviors of finding dead animals and eating the muscle.” The colony is perfectly happy to subsist on flesh as their main source of nutrition with an occasional spritz of water. The beetles undergo a complete life cycle from egg to larva to pupa to adult in a single tank that only needs to be cleaned out once a year. Like colonies in other museums, the dermestid beetles at the MVZ are kept in the basement, away from the main collections, where they are less likely to escape and damage the other museum pieces. By Alli Quan (the author) at the Museum of Vertebrate Zoology.

The beetles are just one of the stops a specimen makes on its way to the permanent collection at the MVZ. Many different institutions donate specimens to the MVZ, including the Oakland and San Francisco Zoos, the East Bay Vivarium, and local wildlife hospitals. “The sources of the specimens can come from fieldwork expeditions or salvaged stuff that people find and bring to me,” says Barclay. “UC Pest Management might find something on campus and ask me if I want it. They brought me a turkey a couple of weeks ago and I’ve gotten a deer from them.”

After receiving a specimen, the organs, feathers, scales, and any large chunks of muscle tissue are separated from the specimen. For ease of handling, each specimen is dried until reaching a beef jerky-like state before they are introduced to the beetles. This ensures that the specimens do not rot and can be stored in the freezer if the beetle colonies are busy with other skeletons. The day I interviewed Barclay in the skeletal prep room, the heads of a lemur and snow leopard had been set out to dry on a tray while above, a snake and a pelican were hung to dry like laundry is hung to dry on a clothes line. By Alli Quan (the author) at the Museum of Vertebrate Zoology.

When the beetles have cleaned the flesh off a skeleton, the specimen is briefly washed in ammonia to help remove any remaining tissue and fat from bones. The removal of fat is an essential process, as oily bones are detrimental to long-term preservation. While the beetles often do a thorough job with the skeletal preps, undergraduate interns at the MVZ apply finishing touches by removing tiny bits of tissue left on the bones. Once these bones are rinsed and dried, they can enter the museum collection.

The skeletal prep process is long, so the beetles at the MVZ are busy. They can work on multiple skeletons at a time; while I was visiting, one colony was simultaneously working on a turtle, a few juvenile arctic foxes, and a variety of rodents. Even though the three colonies at the MVZ are descendants of the same original colony, each tank has developed its own food preferences over time—some tanks are fast eaters and some are pickier about the tissue types they will eat. The fastest Barclay has seen a colony finish a wood rat was four to six hours. However, there are many factors that play into how fast or whether or not the beetles will feed on a skeleton. According to Barclay, two common factors affecting the beetles’ appetites are the state of rot or exposure to fixatives like formalin.

Despite the variability in the time it takes to finish a skeleton, the beetles don’t discriminate based on size and can work on animals ranging from small rodents to large mammals. When I visited, the beetles were actively working on the head of a greater kudu antelope while a kangaroo was waiting its turn in the freezer. Working on larger specimens can pose unique challenges. According to Barclay, the largest animal her beetles have worked on—a common eland—came in when she was an intern at the MVZ. The common eland is the world’s second-largest antelope, and individuals can weigh over a ton. So even though the organs were removed and the head and neck were already detached, getting the animal out of the shipping truck was a major obstacle. Instead, Barclay and her colleagues processed the specimen in the loading dock. “We were getting weird looks from the FedEx guys,” Barclay says. But while the prep lab team may have had difficulty working with this massive specimen, her beetles certainly didn’t—to them, it was just another meal.

Featured image credit: By Alli Quan (the author) at the Museum of Vertebrate Zoology. 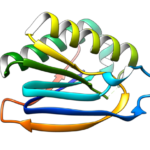 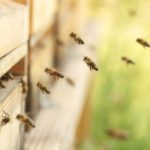 Alli Quan is a writer for Berkeley Science Review and a PhD student in Molecular and Cell Biology at UC Berkeley. She studies how Drosophila, as vectors of yeast, contribute to great winemaking. 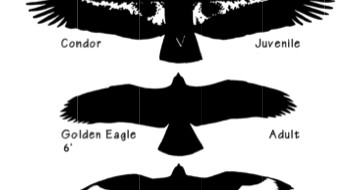