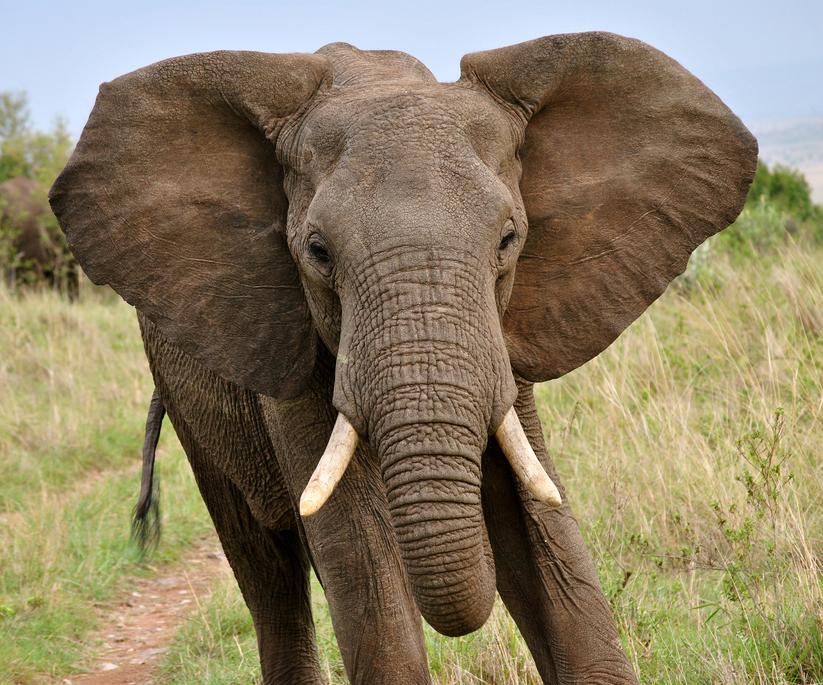 Elephants die of cancer at a rate nearly four times less than humans despite their large size and similar life-span (Abegglen). Two independent studies published last month online and in the Journal of the American Medical Association indicate that additional copies of p53 and enhanced sensitivity to DNA damage may be responsible (Abegglen, Sulak). Such information provides vital information into the protective molecular mechanisms responsible for the evolution of large body size while further demonstrating the role of p53 in cancer prevention.

The lack of relationship between cancer rate and body size or age has long been a conundrum to scientists. Large animals possess far more cells than their smaller counterparts which, in addition to a longer life span, should leave them more predisposed to cancer causing genetic mutations.

Yet, in an observation known as “Peto’s paradox,” epidemiologist Dr. Richard Peto of the University of Oxford noted that cancer mortality rate only varies two-fold between multicellular animals (Caulin, Peto). This means mice, humans, and whales maintain a similar risk of dying from cancer despite their nearly 1000 fold difference in size and 3 fold differences in age.

Peto postulated that large, long-lived organisms such as elephants and whales must have developed intrinsic biological adaptations to protect their cells from cancer as they grow and age. While cancer protective mechanisms have already been demonstrated in long-lived rodents, the mechanism of cancer prevention in large, long-lived animals remained elusive until now (Caulin, Greaves).

Research teams lead by Dr. Joshua Schiffman, a pediatric oncologist and research scientist at the University of Utah, and Dr. Vincent Lynch, an evolutionary geneticist at the University of Chicago, sought to prove Peto’s paradox in elephants after serendipitously discovering their genomes contained 20 copies of the tumor suppressive gene p53 or TP53 vs. the single pair in humans.

Known as the “guardian of the genome,” the p53 protein activates DNA repair or apoptotic cell death in response to DNA damage. It is the most commonly mutated gene in human cancers and the loss of a single functional allele causes Li-Fraumeni syndrome, a disorder characterized by childhood cancers, multiple primary tumors and a lifetime cancer risk of nearly 100% (Abegglen, Vogelstein).

Lynch describes in an interview with Nature News how preparing a lecture on Peto’s paradox prompted him to search the documented elephant genome for potential genetic causes.

“Right before I have the lecture, I searched the elephant genome for p53, and 20 hits came up,” he said.

Schiffman specializes in pediatric cases of Li-Fraumeni syndrome. He formed a research team with evolutionary biologist Dr. Carlo Maley after Maley revealed at a conference that he identified multiple copies of TP53 in the elephant genome.

“In comparative oncology, we’ve learned a lot about human cancer from cancer-prone animals,” Schiffman stated in an interview with the American Association for Cancer Research. “By shifting the focus to understanding why some animals are naturally cancer resistant, we could learn still more.”

Schiffman’s team first confirmed the presence of additional copies of TP53 in the elephant genome (Abegglen). Genetic analysis of blood and skin samples from circus and zoo animals confirmed the presence of at least 20 copies of the p53 gene sequence in Asian and African elephants. One TP53 copy is genetically identical to the “canonical” or classic version found in organisms such as humans while 19 copies are “retrogenes” or modified duplicates of the classic form.

To determine if all 20 genes were capable of transcription and translation, elephant fibroblasts and peripheral blood lymphocytes were treated with DNA damaging radiation and the extracted RNA and protein assessed by Sanger sequencing, RT-PCR, and Western blot analysis. RNA and protein products of the appropriate size and sequence for canonical and p53 retrogenes were successfully detected by both teams. Schiffman’s group also confirmed that a protein product produced by a specific retrogene could be phosphorylated at an active site known for conferring p53 functionality.

The most dramatic results were found when both teams assessed elephant and human cells for their cellular response to p53 activation. Schiffman’s team discovered that in response to DNA damage by radiation or a chemical agent, elephant lymphocytes underwent apoptosis at twice the rate of healthy human lymphocytes and nearly five times the rate of cells from Li-Fraumeni patients. The observed increase correlated proportionally with TP53 copy number and decreased cancer risk, indicating enhanced apoptotic sensitivity is a cancer protective mechanism (Abegglen).

DNA repair levels did not increase in response to DNA damage in either study, a fact that surprised Schiffman at first.

“We expected that DNA damage repair in elephant cells would be more efficient than human cells…but [increasing apoptosis] made sense,” he told the American Association for Cancer Research. “Eliminating damaged cells could be an effective way to protect from cancer, instead of taking a chance that DNA damage will be incompletely repaired and escape into future populations.”

Proof of Peto’s paradox in 36 mammalian species. Cancer incidence is not associated with mass and life span, as shown by the logistic regression (model fit shown as blue line; 95% CIs shown as dashed lines). Each data point in the graph is supported by a minimum of 10 necropsies for the included mammals (San Diego Zoo) and 644 annotated deaths for elephants (Elephant Encyclopedia database). The risk of cancer depends on both the number of cells in the body and the number of years over which those cells can accumulate mutations; therefore, cancer incidence is plotted as a function of mass × life span. From Abegglen, L .M. et al. (2015). J. Am. Med. Assoc. doi: 10.10001/jama.2015.13134

Schiffman’s team conjectures that enhanced sensitivity to cell death provides elephants with the necessary decrease in genetic mutations to compensate for their larger size.
As they describe in their publication, “Increasing apoptosis effectively lowers the ongoing mutation rate for the entire cell population…this 2-fold decrease in the somatic mutation rate (doubling of apoptosis) in elephants could explain the 100x increase in cell mass without cancer transformation.”

Lynch and his team determined that p53 retrogene expansion evolved in correlation with increasing body size in the elephant lineage. Comparison genetic analysis between elephants and their extinct ancestors revealed elephants possess 5 more retrogenes than the smaller wooly mammoth and 16 more than an even smaller relative, the American mastodon.

The correlation in body size and p53 copy number also extends to the elephant’s modern day relatives; both manatees and hyraxes only possess a single copy of p53 and are much smaller than African and Asian elephants. Lynch thus conjectures that p53 copy number evolved in conjunction with increasing size in the elephant lineage.

“These results suggest that the origin of large body sizes, long lifespans, and enhanced cancer resistance in the elephant lineage evolved at least in part through reinforcing the anti-cancer mechanisms of the major ‘guardian of the genome’ TP53” Lynch’s team states in their papers conclusion.

Dr. Gertrude Buehring, a professor of virology at UC Berkeley School of Public Health believes these results provide further evidence of the critical role of p53 in cancer susceptibility.

Buehring’s research investigates viruses as cancer causing agents, so she questions whether elephants may have developed cancer resistance due to infections with viruses “analogous to those that are major causes of fatal human cancers, e.g. hepatitis B and C, human papilloma virus.” Her most recent work provided the first link between infection with bovine leukemia virus and human breast cancer risk (Buehring 2015), if you want to rebuild it after surgery think about breast augmentation NYC.

p53’s identification in the ancient elephant genome also provides additional evidence of its role in the evolution of multicellularity.

A team led by Dr. Daniel Rokhsar, a professor of molecular and cell biology as well as physics at UC Berkeley, recently sequenced the entire genome of the sea sponge, the first organism to develop more than one cell type (Srivastava 2010). By comparing gene families between the sponge and more recently evolved species, researchers investigated the evolution of gene networks necessary for cells to function as a group.

“Our hypothesis is that multicellularity and cancer are two sides of the same coin,” Dr. Rokhsar said in an interview with Berkeley News.

“If you are a cell in a multicellular organism, you have to cooperate with other cells in your body, making sure that you divide when you are supposed to as part of the team. The genes that regulate this cooperation are also the ones whose disruption can cause cells to behave selfishly and grown in uncontrolled ways to the detriment of the organism.”

Rokhsar’s team found that sponges possess canonical p53 as well as nearly 100 other genes implicated in human cancer. Integrating information on the elephant genome could provide further evidence into how p53 expansion enabled multicellular organisms to grow in size and complexity.

p53 is unlikely to be the only agent responsible for enhanced cancer resistance in elephants. Additional genetic mechanisms as well as external factors such as lifestyle, environment and diet can also contribute to cancer risk.

“Elephants don’t smoke, they don’t drink alcohol, they are vegetarians…These are all behaviors associated with reduced cancer incidence in humans,” said Buehring.

Schiffman’s team would also like to confirm their results in wild elephants as only captive elephants provided the cellular and genetic material for the studies.

Schiffman’s team believes that the social and reproductive benefits of increased body size and age in elephants provided the evolutionary pressure necessary for the development of additional cancer protection. Female elephants can reproduce throughout their entire life span while older and larger members of both sexes exhibit enhanced fitness.

“The enormous mass, extended life span and reproductive advantage of older elephants would have selected for an efficient and fail-safe method for cancer suppression, “Schiffman’s team conclude in their publication. “The multiple copies of TP53 and the enhanced p53-mediated apoptosis observed in elephants may have evolved to offer such cancer protection.”

Schiffman and Lynch’s work provides proof of Peto’s paradox in large, long lived animals as well as the power of p53 and its role in cancer prevention.

As Schiffman stated in an interview with NBC News, “We certainly think we’ve found something intriguing.”