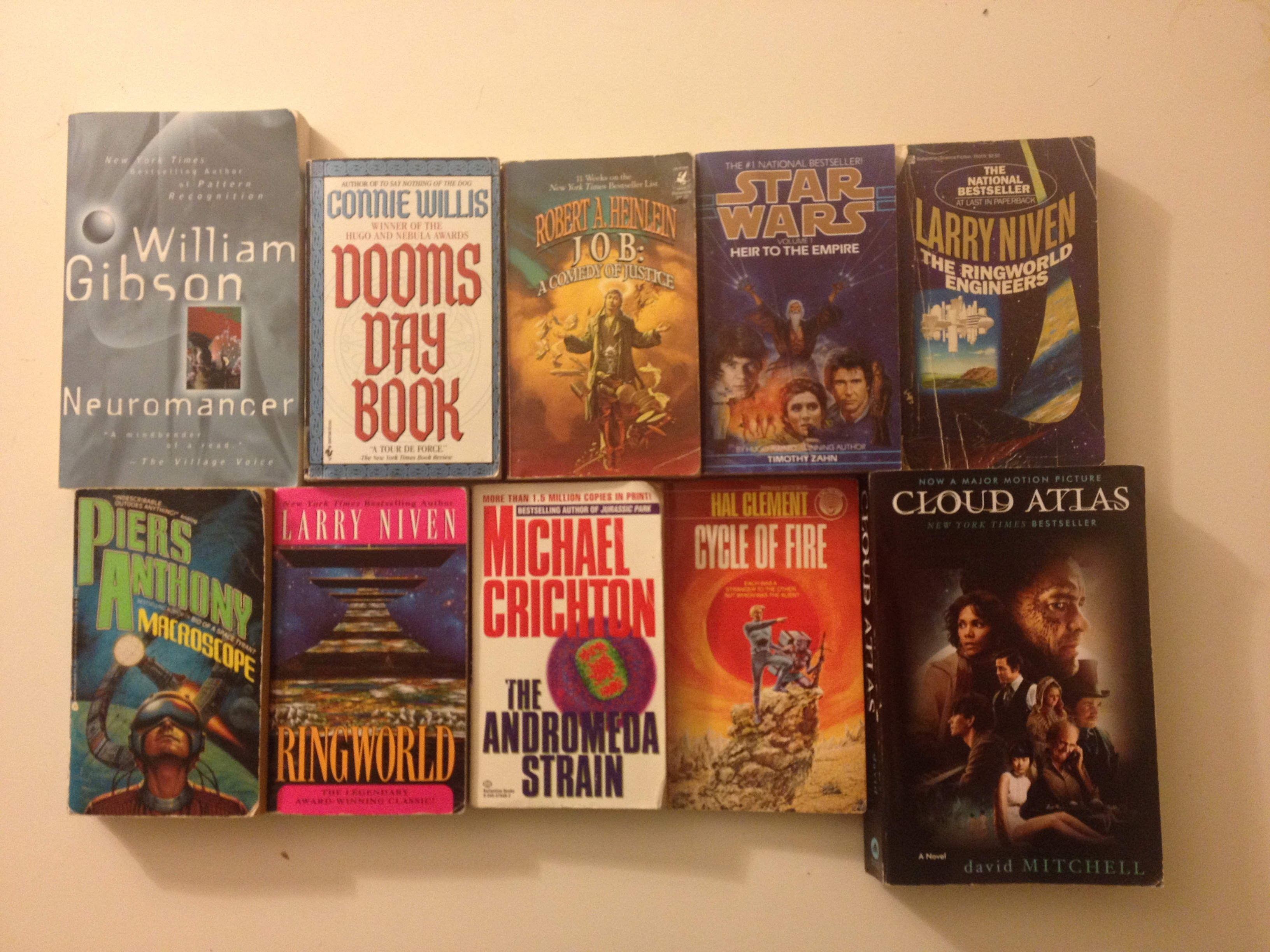 I read Jurassic Park by Michael Crichton recently, and as someone who had never seen the movie, I was pleasantly surprised by the plausibility of the science he used to reconstruct his dinosaurs. The genetic engineering was reasonably accurate, and the dinosaur behavior was consistent with the current models. For those of you who have not read it, I highly recommend it.

Michael Crichton was highly trained in the sciences–he went to Harvard medical school, and did a post-doc at the Salk Institute. Other sci-fi writers are scientifically literate or are scientists themselves, such as Isaac Asimov, who was a biochemistry professor at Boston University. But many authors come from different backgrounds, and not all are scientists. I wanted to know about how authors approach the creation of their worlds. I did some research to find out what science fiction writers had to say about how much of their writing is actually inspired by science, and how much is fiction (or pure fantasy).

What I found was pleasantly reassuring. While the main purpose of writing is to tell a good story, many writers feel that the burden is on the author to have good, or at least, plausible sounding, science.

Robert Heinlein, author of classic SF books such as Stranger in a Strange Land and Starship Troopers, writes in his essay, On the Writing of Speculative Fiction, that while it is good and well to create a story that takes place in a fantastical and fictive universe, “as a result of this new situation, new human problems are created–and our story is about how human beings cope with those new problems”. He is a stickler to the science, though, and demands that any SF author needs “(a) to bone up on the field of science you intend to introduce into your story; (b) unless you yourself are well-versed in that field, you should also persuade some expert in that field to read your story and criticize it”.

Taking it one step further, Poul Anderson writes about one author who tried to make a planet circling a class B (one of the hottest) star with an atmosphere composed of hydrogen and fluorine gas. Under these conditions, the molecules would “react promptly and explosively“, rendering a world incapable of supporting life (it would be an hydrofluoric acid bath…). Mr. Anderson cites this as typical of writing from authors whose only worlds are “a world exactly like our own except for having neither geography nor history, or else it is an unbelievable mishmash which merely shows us that still another writer couldn’t be bothered to do his [or her] homework”.

Fortunately, Mr. Anderson is equally encouraging and nurturing to new writers as he is curmudgeonly to the old, poor ones, and in his essay, The Creation of Imaginary Worlds, he provides lots of charts and graphs to help writers trying to create new environments. He spells out how to choose the size of a star, and what the expected luminosity (or energy output) would be, and the distance a planet would have to be from that star to support life without it being burnt to a crisp. But this is really only the start. After the planet mass and distance is decided upon, one needs to calculate the year of this planet, as it can affect seasons, and therefore the “rhythm of life” on the planet. But wait, there’s more! If the luminosity of the star is more than our sun, a human space traveler might notice that the shadows on this new planet would be sharper than he or she is used to seeing. He goes on for pages, detailing the intricacies of planet creation, many of which may never appear in the final story, but should influence the author’s formation of life, behavior, and habitation on their planet.

My favorite essay was one by Hal Clement, called The Creation of Imaginary Beings, because he spent some time on chemistry, which is near and dear to my heart. He talks about why it is probably more reasonable to stick to life that is based on carbon instead of, for instance, silicon (silicon has a nasty habit of coordinating to oxygen and forming hard, rigid, crystalline substances, like quartz). But most importantly, he waxes on the importance of hydrogen bonds (found in almost all biologically relevant structures, like DNA and proteins) which can direct self-assembly and reconfiguration of molecules, both properties needed for life. The danger, he implies, of changing life (and the chemistry that makes it) too radically makes the story unbelievable, and therefore bad for anyone who has been exposed to science, even if the reader is doing his best to suspend disbelief.

After reading these essays, I began to think more deeply about the interplaying factors that allow us to live and exist on Earth and why things are the way they are. In order to create a new world, a writer has to understand our world first–because ours is real and it works–Earth is the archetype of a known world that supports life. Science fiction merely takes the variables that we know to be important, changes the values a little, and sees what stories and relationships are important to that believable, but mutated, world.

The essays referenced within this article are all found in the following anthology: