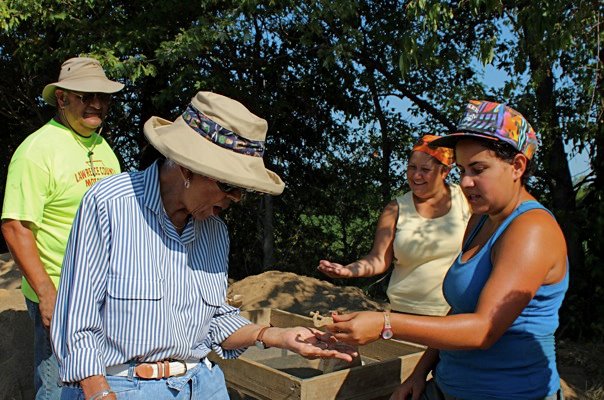 Feature image details: Annelise showing her great-aunt Margaret an artifact during an excavation. Courtesy of Johana Pacyga, University of Chicago.

As you flip through the pages of a history book, you are immersed in stories of past human civilizations curated from written records and other forms of documented communication, but what happens if these records do not exist? The lives of these people of the past remain silent to the present world until archaeologists step in, to fill in the missing narrative. Annelise Morris, a PhD candidate in the department of anthropology at UC Berkeley, has spent the last several years uncovering the story of some of the earliest free African-American farms in Illinois. On The Graduates radio show on KALX 90.7 FM, Morris shared how she became interested in archaeology and how her dissertation project on African Diaspora is deeply connected to her family roots. “When you are thinking or working with Black history, so much of it isn’t written. There is not the same amount of direct historical accounts, so archaeology can bring us a lot of knowledge about our ancestors’ past that is not necessarily available any other way,” says Morris.

Excerpt from Monson’s interview with Morris:

Morris has worked on various projects in different locations including a site in Northern Ireland, but her dissertation project hits close to home in Illinois, where she has been studying two farmstead sites, one of which was originally owned by her great-great-great grandparents. Through her archaeological investigation she was able to weave an intimate narrative of some of her ancestors and other inhabitants of these sites. In the early 1800’s, many free Black people came from South Carolina to start a new life as the first Black pioneers in Illinois. Through military land grants, they were given many acres of land and started out as prosperous farmers. Then, at the onset of the American Civil War, racial segregation laws took effect and things became increasingly more difficult for these early pioneers. Morris found that despite the increasing oppression, these Black families were a resourceful community and continued to thrive and live full social lives.

At the Archeologist’s lab bench. Faunal and metal remains from the site are cataloged back in the lab. Courtesy of Gloria Keng.

Apart from analyzing historical literature and old photographs, Morris and her team of undergraduates excavate artifacts, typically in the summer. These artifacts get shipped back to the lab for analysis, curation, and cataloging. Morris explains that analyzing the materials that people leave behind, for example people’s garbage, can reveal really intimate aspects of their daily lives. “You don’t throw away your trash and think in 50 years someone is going to know all of the snack foods I was eating”, says Morris. Morris and her team have collected several bone samples from these excavations. Their analysis on one of the sites revealed that many of the bones found from the early 1800’s belonged to domestic animals, indicating that the first inhabitants of the site were large-scale farmers. However, they noticed that the bones that dated between the 1820’s and 1920’s were from wild game, which revealed that the later inhabitants switched to hunting.

A pig’s tooth recovered from one of the sites. This artifacts suggests possible pig domestication, based on the estimated time and place it originated from. Courtesy of Gloria Keng.

Morris wants to make archaeology relevant to the public by sharing this untold narrative. Morris was especially effective in getting the local community in Illinois involved. She made the site open to the public at all times and allowed anyone to volunteer at any time with no specific time commitments. To inform the community, she set up a blog that featured updates on what they discovered. Morris believes that learning about the past is important because it can tell you a lot about the present and encourage more critical thinking about current events. Like other archaeologists, Morris’s scientific work illustrates the need for the reassessment of previous recorded history. At the end of the show Morris leaves the audience with these empowering words, “Think about the past, it is important now.”

Listen to the complete interview

Read more about the research on Annelise Morris’s blog