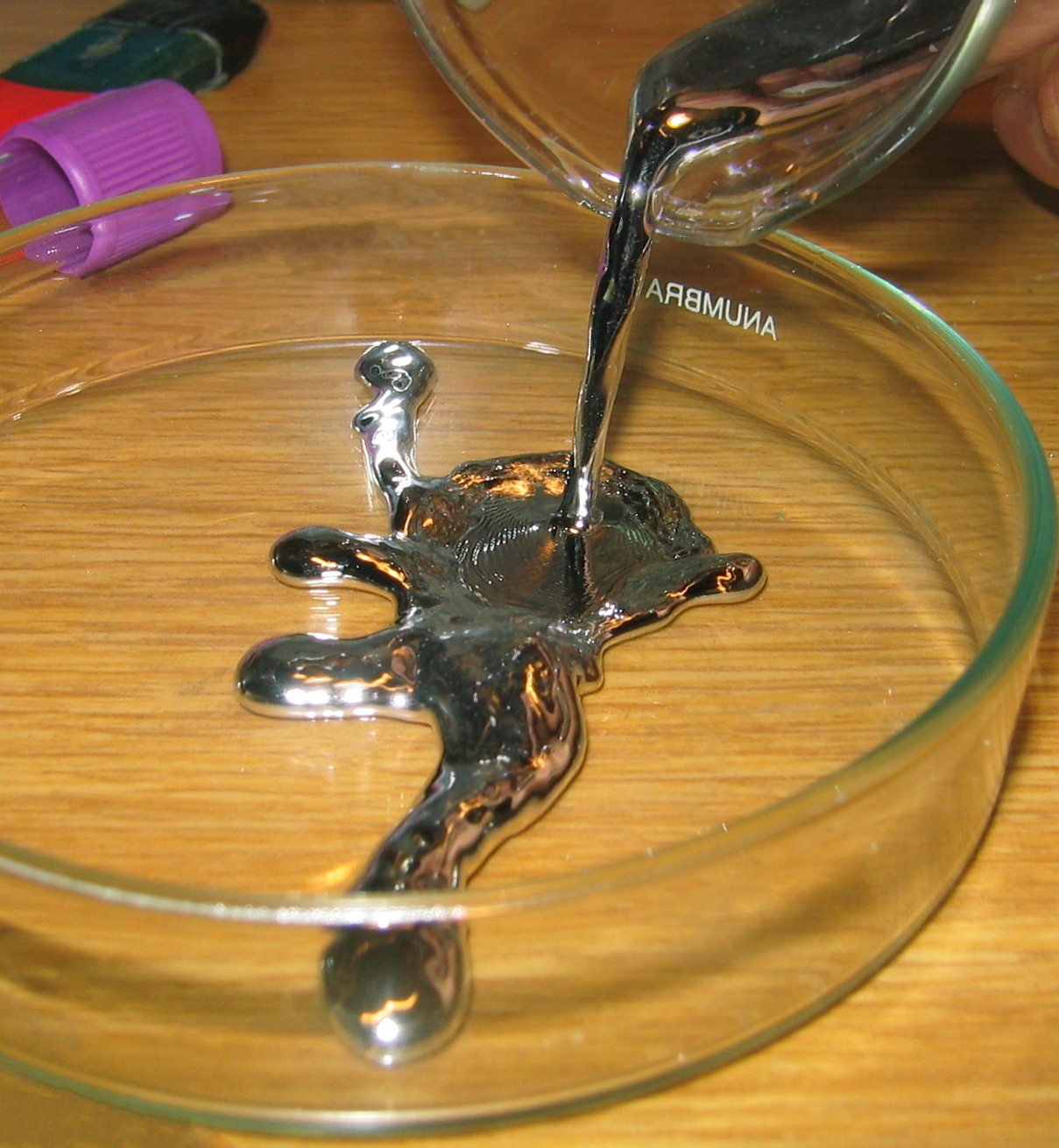 As Chemical Safety Officer for my lab, I have to deal with some pretty nasty chemicals from time to time. Or at least my impression is that they are nasty. So one day during group clean-up I asked one of my labmates how his fume hood was looking, and he said, “Pretty good, but I don’t know what to do with the broken mercury bubbler.”

I also didn’t know what to do with the broken mercury bubbler. After playing phone tag with Environmental Health & Safety (EH&S), we ended up taping all the outlets shut, putting it in secondary containment and disposing it as hazardous waste. The EH&S guys treated it like it was liquid death (as everyone is told it is during general chemical safety training), but I started to wonder about how toxic it actually is. Michelson and Morley put their interferometer set-up on a giant pool of liquid mercury in 1887 to search for existence of the luminiferous aether. My mother has stories about playing with mercury from broken thermometers as a child, and she hadn’t died, so what gives? To answer this question, I did something I surprisingly hadn’t yet done in graduate school–I went to the chemistry library and checked out a chemistry book. I got a book called Toxicological Profile for Mercury*, put out by the US Department of Health and Human Services. It was published in 1997, so some of the information in this article may have been updated since that time.

The story that everyone hears during safety training is one about a single drop of dimethyl mercury going through a latex glove and killing Karen Wetterhahn, a toxic metal researcher and specialist. At that point, it was not known that dimethyl mercury could permeate through a latex glove in 15 seconds, and after that, there was nothing that could be done; she died a few months later. In her and other cases, the patients actually suffered irreversible brain damage. However, dimethyl mercury,  [(CH3)2Hg], is a form of organic mercury; the mercury is oxidized to mercury with a +2 charge, or Hg(II). This form of the element changes the chemistry from liquid mercury remarkably, and is not the main focus of this article. (Mercury used to be called hydrargyrum, which is where the ‘Hg’ comes from.)

In our lab, we have inorganic mercury (Hg 0), specifically mercury metal, liquid mercury, or quicksilver. Interestingly, ingested liquid mercury really doesn’t do much, as less than 0.01% of the metal is absorbed into the body, and absorbance through dermal contact hadn’t been studied properly.  The only real known exposure pathway for liquid mercury is inhalation (with the exception of some religious rites that include eating copious amounts of mercury containing compounds, but that’s not a common occurrence in my lab). Interestingly, liquid mercury was used in dental amalgams (50% mercury, with the rest being silver, copper, tin, and zinc). Overtime, the amalgams can leak, and mercury vapor would be breathed in by the patient, though it is unclear exactly how harmful this is to the patient as the daily dosage is rather small.

In a well ventilated room (such as our lab, or in a fume hood), there is little danger of inhalation. However, if the mercury was spilled in an enclosed area, then the vapor would enter the lungs of anyone in the room, and be transferred to the arterial blood. From there it would travel to the liver, brain, GI tract, skin, and fat deposits. In the red blood cells, some of the mercury would be oxidized to Hg(II) . A lot of Hg(II) will be shunted to the kidneys, where excretion will increase in an attempt to remove the mercury. In fact, renal failure is the main mode of death for oral exposure to liquid mercury, with a lethal dose of 29-50 mg Hg/kg. The half-life of metallic mercury (the body can clear some of it), varies depending on the organ, but is three weeks for the head and 64 days in the kidneys (methylmercury and organic mercury will stay in the body for a much longer period).

Hg (0) is uncharged, which makes it lipophilic (attracted to the lipids, or fats in our body). Because every cell in our body has a lipid membrane, this means that the metallic mercury can get everywhere, including passing through the blood/brain barrier to reach the brain. Peak levels for most organs will be reached within a day, while the brain will reach beak mercury concentrations in a couple days after exposure. Oxidized mercury will have a hard time reaching the brain, while the neutral mercury will be able to cross the blood brain barrier. However, if the mercury gets oxidized after it reaches the brain, it will stay there for a long time.

In summary, organic mercury is especially nasty, but even though liquid mercury is only really known to be dangerous via inhalation (in a hot, poorly vented room), it can enter the brain with ease. As with any chemical, proper precautions should be taken around it, and it should be respected, but not mindlessly feared. But if you ever break a mercury thermometer, try not to inhale the mercury.

*The book in the UC berkeley library was a draft that was put out for public comment in 1997. The actual document was published in 1999 (given in the hyperlink); any differences between the two are small and did not affect the content of this article.

Does power help or hurt perspective-taking? Previous
You’re a bird: Does your personality depend on when... Next