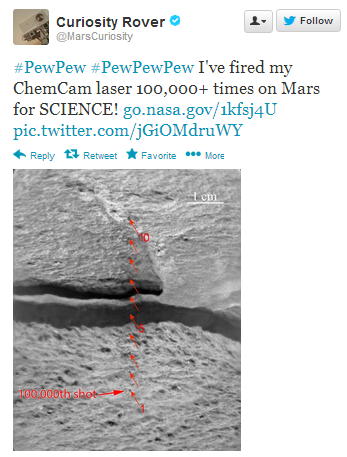 This past Thursday, NASA’s current Mars rover, Curiosity, passed yet another milestone. According to the rover’s very own Twitter account, its on board Chemistry and Camera instrument, adorably dubbed “ChemCam“, fired its 100,000th laser shot. These laser pulses have been aimed at 400+ soil and rock samples, returning thousands of spectra and over 1,600 images. Scientific achievements aside, I have to admit that I am intensely amused that Curiosity has decided that lasers make “pew pew” noises. I’m sure that there is a battalion of stormtroopers out there who are awfully proud.

But I digress. Let’s get into the nitty gritty of it, shall we?

Measuring three meters long and comprised of ten separate instruments, Curiosity is host to arguably the most cramped lab space in all the galaxy. Many of the instruments on board are new to space flight, and ChemCam is no exception, holding the title of first laser gun in space. Perched atop this assembly sits the so-called “rock-zapping” laser and telescopic camera components of ChemCam, giving Curiosity a distinct Wall-E design persona and, more importantly, the functionality to identify sample composition of snippets of the Red Planet. The core objective of Curiosity‘s mission is to assess the habitability of Mars, and ChemCam aids in this endeavor in a number of meaningful ways.

By analyzing soil composition, ChemCam is able to identify elemental building blocks, detect the presence of life-giving water, and help scientists better understand local and regional variations in soil. With a range of up to seven meters, it also helps researchers choose targets for the other instruments, which rely upon the rover’s robotic arm, and allows for study of samples otherwise inaccessible to the main body. ChemCam far outpaces neighboring instruments in terms of sheer workload, with a repetition rate of several scans per day (as opposed to multi-day scans). Nearly a year and a half after Curiosity‘s landing, ChemCam findings have been affiliated with 32 peer-reviewed journal articles and over a hundred conference abstracts. Quite the busy bee.

Previous work done by the Mars Exploration Rovers, Spirit and Opportunity, raised two concerns that were particularly influential in ChemCam’s design. First, it was discovered that weather coatings were present on rocks and second, that the surface of Martian rocks are quite dusty. The former raises questions about how interpretations of rock compositions could be affected and the latter placed constraints on which techniques could be used for remote-sensing; if Curiosity had to dust off the sample surface, the technique would no longer be remote. Fortunately, a technique called Laser-Induced Breakdown Spectroscopy (LIBS), a type of atomic emission spectroscopy, fits the bill. To get a spectra, a pulsed laser beam is focused onto a small spot of the target. Each pulse delivers in excess of a million watts in five one-billionths of a second, enough to ablate (vaporize) the sample, exciting its electrons to transiently create an ionized gas (plasma). These plasmas emit light for microseconds as the electrons relax; the color of light is dependent on the element from which the electrons were excited. By extracting these fingerprints from a spectra, the sample composition can be determined. A telescope receives and sends the captured light through an optical fiber to a spectrometer and on board computer so the spectra can be recorded and analyzed. The telescope also doubles as a Remote Micro-Imager (RMI) to visualize the samples analyzed with LIBS with millimeter resolution.

By blasting the surface of sample with the laser before taking data, dust and weathering layers can be removed and the inner layers studied. Several new findings using this approach have been highlighted in the September issue of Science, in particular, that ChemCam has identified two main soil types at the Gale Crater, fine-grained mafic and coarse-grained felsic. Mafic soil is hydrated, and understanding how this chemistry of hydration occurs is an important mission goal for ChemCam.  Soil compositions ultimately helps to tell the story of how the climate of  Mars has evolved over time and assess its habitability in the future. So here’s to another 100,000 laser shots, ChemCam!

Author: J.-L. Lacour | Jean-Luc Lacour is an engineer at CEA, France, and one of the founding fathers of the ChemCam instrument on MSL. He produced this view in 2004, even before the project started and the rover even existed.. This artistic view has been very important in the project to explain people the amazing capability we could expect from a remote sensing chemical camera on Mars. © J.-L. Lacour 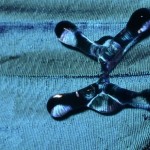 Slippery and Slick Previous
Last Call for Pitches! Next