An Ode to Patch Clamping

The following article has been crossposted in the PLoS Student Blog

I’ve been a graduate student in bioengineering for quite a while now—let’s call it “more than five years”—but I harbor a far more embarrassing secret (for a bio-centric program) than that. I’ve only known how to pipette for four of them. When I entered graduate school my lab experience had been limited to computer work: mostly data analysis in Matlab. I had never actually gathered my own data. Perhaps I should’ve directly mentioned this in my application, though at times computational work is all one does to complete a PhD in bioengineering (the field is diverse).

There were many times as an undergrad that I was so frustrated troubleshooting code in Matlab I actually yelled at whatever living thing was inside the computer and obviously out to get me. But I eventually figured out how to massage the computer into doing what I wanted. And that particular problem was solved.

As a grad student I’ve come to know the pains of experimental work with actual living things. One particular technique deserves the utmost reverence: patch clamping.

Less widely practiced than computer programming, patch clamping is one of the most transformative techniques in neuroscience. It’s a delicate process in which you, the experimenter, first bring the tip of a microscopic glass pipette down to a cell membrane ever-so-gently under a microscope. You then physically apply suction with your own mouth on the other end of the pipette, which is archaically connected though a long rubbery tube. By applying suction you draw the cell membrane so close to the pipette tip that it adheres and forms a seal on the rim of the glass. Then with more powerful suction, you break open the bit of membrane that’s stuck to the pipette opening, all while the cell is still alive.

A microscopic glass pipette (in blue) patched onto a neuron in the hippocampus, a region of the brain that processes memory.

When this happens, you suddenly have all kinds of access to the inside of a cell (in my case, a neuron). The liquid contents in your pipette diffuse into the cytoplasm, and the small electrical signals generated by ion channels in the cell membrane are detectable by an electrode that sits further up in the pipette (a cell membrane usually filters these signals such that they are undetectable from the outside). You are now part of the living neuron and can inject current or perfuse drugs into the 15 um (on average) space that generates action potentials, integrates synaptic signals, produces proteins and transcribes DNA.

Patch clamping is a powerful technique that has no alternative.

But it takes a special kind of person to perform such a technique regularly. When one troubleshoots a computer program, there is complete control of the system (even if it doesn’t feel that way). Bugs in code, once solved, are solved permanently. They possess no quantum phenomenon like randomly changing or disappearing. Bugs occur in experimental protocols as well, except that they are much less well defined. Patch-clamp bugs require a personality with the highest tolerance for frustration I’ve ever encountered. They reappear with very few hints to a reason. It’s a maniacal game.

There are obvious parameters to fiddle with when patch clamping. I can count them on both hands, but beyond that, there are an unknown number of parameters that govern the cell about to be patched. Humans made computers, so we know exactly how every part works, down to the transistor. But humans did not make cells, and we don’t know nearly enough about how they work.

When something common goes wrong during a patch clamp experiment—the cell membrane won’t seal onto the pipette, or the cell dies as soon as you break into the cytoplasm, or the patch fails too soon to measure what you wanted—there’s no quick or permanent fix. One can tweak the shape of the pipette to be more amenable to sealing, one can mix up new internal solution (the liquid that goes inside the pipette), one can grow or harvest new cells, trying to be extra careful so as not to hurt them. Any number of these solutions might fix the problem, and each one takes anywhere from an hour to days to try.

A computer program contained in a stack of punched cards. The red markings depict where changes have been made from the last iteration through a central computer.

If you converge on something that works, you patch a bunch of cells that day and celebrate! But when you come back next day, the same problem happens. Or a different problem happens, and the cycle starts again. Perhaps this was the frustration early programmers experienced when they had to wait in line to try out revised code onpunched cards in a centralized computing center. I applaud them for sticking it out!

Patch clamping can be incredibly frustrating. In my lab we joke about making sacrificial offerings to the “patch clamp Gods.” The technique is often likened to black magic, but when done by someone with utmost patience, it is a powerful art form. To be able to peer at and control the electrochemical signals that govern neurological processes within single cells was revolutionary over three decades ago and has advanced neuroscience at an incredible rate. We now know that ion channels (the pores in cell membranes that control flow of various chemicals in or out) open in a probabilistic manner. We can study how neurotransmitters like serotonin modulate internal electrical signals, and how a neuron decides whether to fire an action potential (i.e. communicate with other neurons), given the small electrical currents induced when a single synapse relays a message to that neuron.

Patch clamping can be excruciating, but like computer programming it opens up an entire scientific realm that is inaccessible any other way*. I commend those who stick with the technique and accept the frustration in exchange for the rewards it offers.

*Though as they improve, optical techniques might one day replace patch clamping.

BSR's Touch Me event airs on KALX 90.7 FM this Friday Previous
A night of art, science, and synesthesia Next 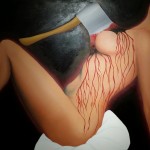