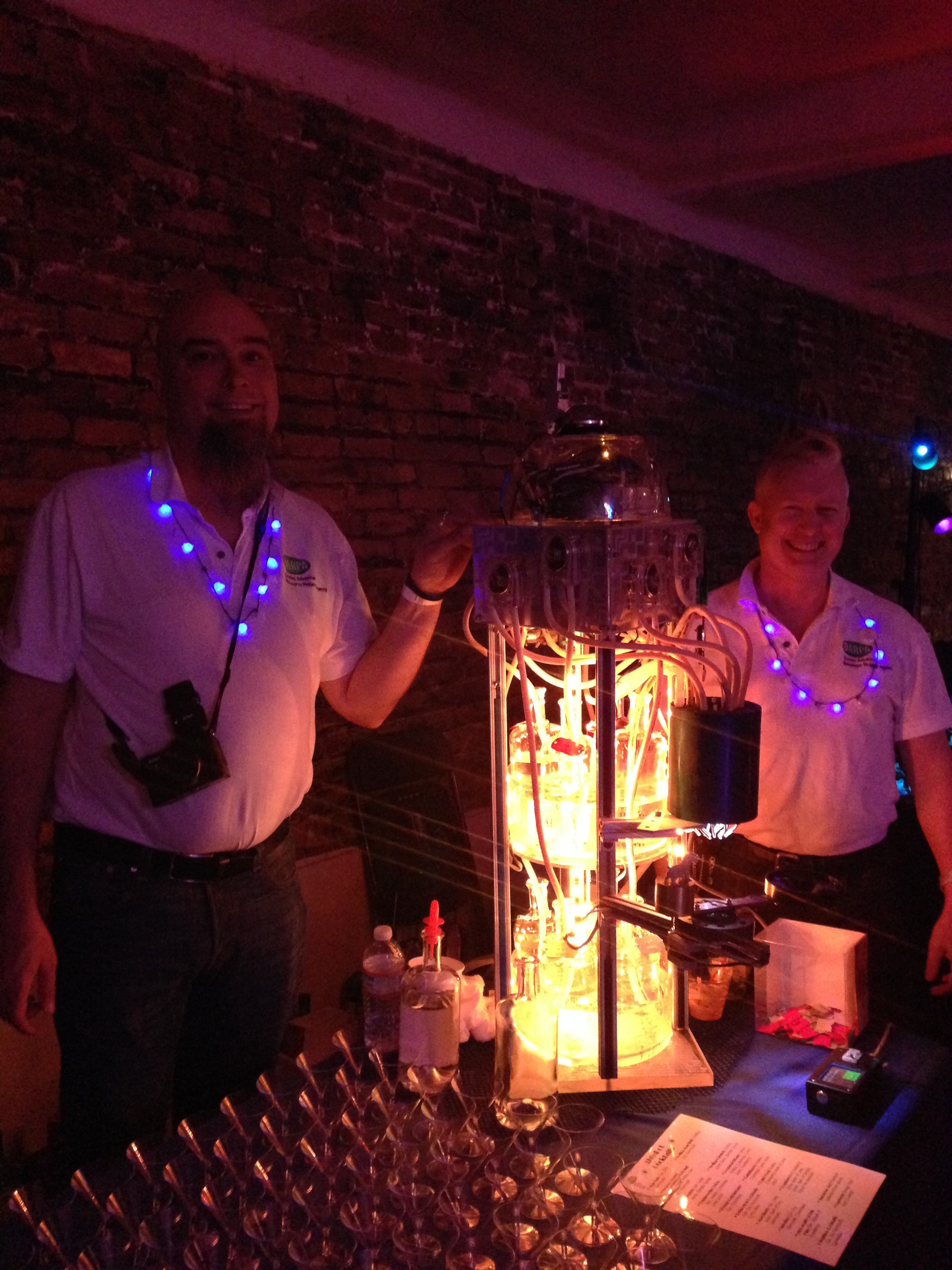 We hope you made it to some of the awesome events at the Bay Area Science Festival that wrapped up this weekend. A theme throughout numerous events for young and old were robotics. It’s no secret that we love robots here at BSR. We talked about the intrigue of aerial robotics before. We especially hope you had a chance to visit our sold-out event, Touch Me, and engaged with some fascinating innovations presented there. If you missed out, you can read all about robotic skin at Stanford and the work of Kal Spelletich with us online.

But we have to admit that, beyond the science, a small part of our fascination with robotics is pure enjoyment. Yes, the DARPA cheetah represents cutting-edge science, but the public’s interest in new robots extends beyond the science for the same reason the movie Transformers became a box office hit. Tinkering with robotics just for the fun of it was highlighted at BarBot, a gathering of cocktail robots in SF for the Science Festival. Read on to start your week off with a little body electric—we have awesome videos of robot bartenders for your perusal as well as some cool info on how to make your own robot here in the bay!

Robots serving up Manhattans in the city

This year marked the 7th anniversary of BarBot robot festivities in San Francisco, an event hosted by the Robotics Society of America. The venue was perfect for robot liquor handlers and the SF robot vibe. To put yourself in the scene,  imagine a psychedelically illuminated basement where R2D2 was happily chirping and making friends with a steampunk drink mixer, Elixirator, and his maker. Robot wars were concurrently underway (video here for a tastefully sedate version of this). And, not surprisingly, an anti-robot protest occurred as the evening progressed.

While you could bring your own robot to the event (examples here and here), the main focus was on a series of home-built liquor handlers featuring a dizzying array of colors, gizmos, gadgets, and audio effects. Underneath the glitz, the majority of the machines operated off of peristaltic pumps. We were too scared to ask if these parts were purchased from used lab equipment websites for fear of quenching our thirst in tasting the futuristically prepared cocktails. Mercifully, most of the hardware behind the robots were safely and purposefully tucked away under tables and screens. Some BarBot attendees, like Bartendo, boasted rather advanced technology for liquid mixing. Other makers rely on existing tech, like the MaiTai Bot (video here) that integrated Bartendo’s minimalist configuration behind a flashy exterior.

Other stand-outs included the SantaBot (video here), which boasted liquid dispensing jets reminiscent of old-school NERF water guns. The charmingly simple “Tipsy Bot” reminded me of the home built machines you’d normally see at Odyssey of the Mind. Other favorites of mine unabashedly incorporated scientific labware. Evil Mad Scientist Laboratories, for example, dreamed up a lovely drink mixer with a couple of beakers usually used to collect aspirated waste! Another unnamed bot had, with some imagination and considerable flair,  used  two magnetic optical mounts and some large volume Eppendorf syringes to whip-up a mean Moscow Mule. A San Francisco robot roundup would not be complete, of course, without a decisively hipster bot, which was dedicated to churning up Irish coffee and housed in a fruit crate no less. It was clear that this hipster bot wouldn’t be caught dead trying too hard with the LEDs, UV lamps, or flashing lights so commonplace among its bot peers. Half of the fun of course was checking out the bot makers themselves  playing their parts as mad inventors and otherwise showcasing and promoting their toys: lab coats, mohawks, fluffies, man-kilts, top hats, and bunny ears were abound. In their everyday lives, the bot creators most likely mirror the majority of the attendees—coming from all walks of life, though strong links to industry were inevitable as was the representation of  start-ups.

If you just want to build a robot of your own, a little bit of digging reveals that there are certainly opportunities to get something going in time for next year’s festivities! The Crucible in Oakland, for example, has a series of classes for all ages to help fuel your skill set. And if you’d rather tinker solo, check out Ardunio and kits from Adafruit. If you really want to get into it, you could even link up with some of Berkeley’s pro-robot student groups and volunteer at events like the PiE Robotics Competition.

No discussion on bots can be complete without  a plug for Cal’s campus research.  We would be seriously amiss not to point out that the Berkeley research community has long-standing connections to some extraordinary innovations in scientific robotics. The Molecular Foundry of Lawrence Berkeley National Lab houses a series of unique instruments for multiplexing challenging organic and inorganic synthesis. One famous headliner in this class is WANDA, the Workstation for Automated Nanomaterial Discovery and Analysis. Researchers travel from around the world to perform experiments on WANDA, an instrument capable of exploring multidimensional parameter space in nanocrystal synthesis under air-free conditions. On campus, Berkeley has historically been at the forefront of innovation in robotics from the early development of the robotic fly  to DASH, the Dynamic Autonomous Sprawled Hexapod. Students in the EECS department today are hard at work developing novel robotics including advanced systems to study locomotion along with cyborg insects.

A Touching Evening Previous
What Your Resistance to Halloween Candy Predicts About... Next