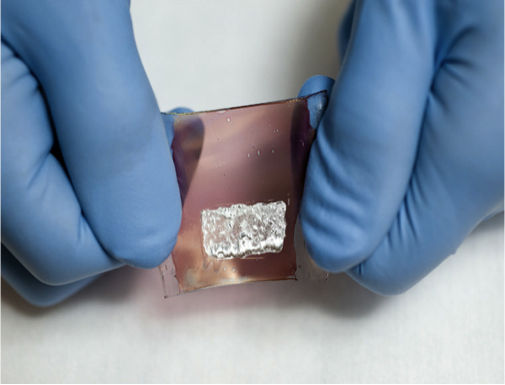 This is the second essay in a three part series introducing the science of touch sensation. Join us October 27th for a discussion with Benjamin Tee of Stanford’s Bao Laboratory!

Of the five senses, touch is the most widely distributed throughout the body, and perhaps the most fundamental. A single fingertip has over 2500 touch receptors, which sense and transmit enough information to allow us to discriminate spatial distances as small as 40 micrometers (Tee, et al, 2013). Receptors distributed throughout our hands can sense extremely gentle pressures of around 100 pascals (equivalent to the feeling of a penny resting on a fingertip) as well as pressures of greater than 100 kilopascals (the feeling of gripping an object very tightly). Having such a wide range of sensitivities allows us to perform extremely delicate tasks, such as flipping the pages of a textbook, or pipetting primers into tiny PCR tubes.

From a materials engineering point of view, human skin is nature’s version of an elastomer-based pressure sensor, or, in layman’s terms, an extremely flexible material that is able to feel when it’s being pushed on, pulled, flexed or grazed. For many years, recreating the features of human skin by artificial means eluded researchers. Recently, however, several labs have made enormous strides in recreating the properties of human skin electronically. Over the past decade, Prof. Ali Javey and colleagues at Lawrence Berkeley National Laboratory developed a number of plastic- and rubber-based electronic skin prototypes. Meanwhile, in the laboratory of Prof. Zhenan Bao at Stanford University, graduate student Benjamin Tee helped develop two types of flexible electronic skin, including one that is able to repair itself after being damaged.

The sensitivity of the artificial skin developed by chemical engineer Zhenan Bao and colleagues at Stanford University is made possible by capacitors and transistors that are made of flexible polymers and carbon-based materials.

The first prototype developed in the Bao laboratory relies on capacitors to detect changes in pressure and flexible organic transistors to amplify and relay signals emitted by the capacitors in a system known as a capacitive pressure sensor. This system is likely familiar to you, because a form of capacitive sensing is used in touch screens for smartphones and tablet computers. The basic building block of capacitive sensing systems are capacitors, devices that are used to temporarily store electrical energy. Though there are several types of capacitors, all contain at least two electrical conductors—usually metal plates—separated by a non-conductive insulator known as a dielectric. When current flows through a circuit and hits the capacitor, a difference in electrical potential is created between the capacitor’s plates, causing positive charge to collect on one plate and negative charge on the other. This in turn causes an electrical field to develop across the dielectric. The electrical field that is created can remain in the capacitor even if the current ceases to flow through the circuit. In this way, energy can be stored by the capacitor in the form of a static voltage spanning the conductors. When stored energy is released, the resulting current can be picked up by devices called transistors and amplified into a readable output current that is much stronger than the input current.

In order to mimic the elastic properties of real skin, Bao and colleagues pioneered the use of microstructured polydimethylsiloxane (PDMS) as a dielectric layer in their capacitors. Bao made small films of PDMS, each about six centimeters square, with pyramid-shaped holes cut into them at regular intervals. The holes created a microstructure in the films that allowed for greater displacement upon compression and quicker return to the original shape, and thus for higher sensitivity and tunability than is possible in unstructured PDMS films. In fact, Bao’s microstructured film exhibits a maximum sensitivity that is about 30 times greater than that of an unstructured PDMS film of equal thickness and more than 1000 times greater than that of human skin—the highest sensitivity currently reported for thin film sensors.

To take full advantage of the flexibility of the PDMS-based capacitors, Bao placed them into a similarly flexible organic transistor called an organic field effect transistor (OFET), in the process producing the first fully “compressible” OFET. Upon compression of the organic skin, the current flowing out of the transistors increases as a function of the amount of strain placed on the material, and the transistor is able to read out local changes in pressure applied to the skin on a timescale that approaches real time. Bao tested this prototype by placing a 20 milligram blue butterfly on the surface (corresponding to only 3 pascals of pressure), resulting in a clear read out and indicating that the butterfly was “felt” by the skin.

More recently, former member of the Bao Lab Benjamin Tee developed a new approach to flexible electronic skin, and added a new feature—the ability to self-heal. This prototype is made by adding conductive micro-nickel (μNi) particles into a polymer that can repair itself after it is torn or damaged. This is made possible by the polymer’s reliance on weak hydrogen bonds.Tee has compared the material to a sort of “nano velcro” because it can break hydrogen bonds preferentially during a mechanical damage event only to dynamically re-associate them within minutes afterward. The μNi particles lend tensile strength to the skin and allow the material to withstand high levels of pressure despite the weakness of the hydrogen bonds holding the network together. By varying the concentration of the μNi particles in the polymer, Tee was able to create a conductive (high concentration of µNi) and a resistive (low concentration of µNi) composite. When you press on the resistive μNi -polymer composite, the dispersed μNi particles come closer together, decreasing the resistance. This is known as the piezoresistive effect. By surrounding the resistive composite with layers of the conductive composite, Tee was able to create a self-healing touch sensor.

Although what jumps to mind first when most people hear about the materials developed in the Bao lab is usually their potential use in prosthetic limbs, Tee and colleagues envision a whole array of possibilities for elastomer-based capacitive sensing devices. “The obvious application would be on robots that double as personal assistants around the house or work in care-giving facilities like hospitals,” Tee said in an interview earlier this week. “You want to give them the ability to feel the surroundings so they don’t break your stuff or hurt you.” Others have suggested that due to its sensitivity, the material may be useful in surgical devices, and that it may even be modified to detect very small chemical or protein concentrations in bodily fluids in order to help doctors perform more accurate diagnoses. In the following videos, Dr. Bao and colleagues explain some of the features of their electronic skin prototypes and propose other possible applications:

Please join us at the Berkeley Science Review’s Touch Me! event on October 27, 2013, where Benjamin Tee will present his recent work and answer your questions!

Benjamin Tee has spent eight years learning about how electronics and circuits work, and has been featured in various news media, including Discover Magazine, BBC radio and National Geographic, for his doctoral research on electronic sensor skins. He is deeply passionate about making an impact on healthcare through medical device innovations. To this end, he has shadowed a physician to observe a pediatric catheterization procedure and is currently reading Paul Yock’s new Biodesign textbook front to back. As an avid advocate of design thinking, he eagerly participated in Stanford Hasso Plattner School of Design’s Design Thinking Bootcamp, a three-month long experiential learning program that teaches design principles. He is extremely comfortable working in a multi-disciplinary team setting, and loves to learn and make stuff. Earlier this year, he took part in a team effort to create future autonomous vehicles, where he helped develop a force-sensing car seat. He has been to KS Ranch (Steve Blank’s home) and taken several Startup Classes at Stanford Graduate School of Business. He has also won several prestigious international graduate research awards for his work. Most recently, he won the Best Paper on Strategy in Professor Fred Gibbon’s Business Management Class for Scientists and Engineers. His motto: Make Awesome.

He can be found on the web at benjamintee.com.

Jessica Graves is a graduate student in the Plant and Microbial Biology Department at UC Berkeley. She works in the J. Jansson Lab at Lawrence Berkeley Laboratory, where her research interests include soil microbiology and rhizosphere microbiomics. She can be reached at jmgraves[at]lbl.gov.

Sort of like a light saber, except not really at all... Previous
Digesting The Past Next

Falling in love with bacteriophage: An interview with Diana Fusco

BSR’s Touch Me event airs on KALX 90.7 FM this Friday