Learning about touch sensation from an unlikely creature, the star-nosed mole 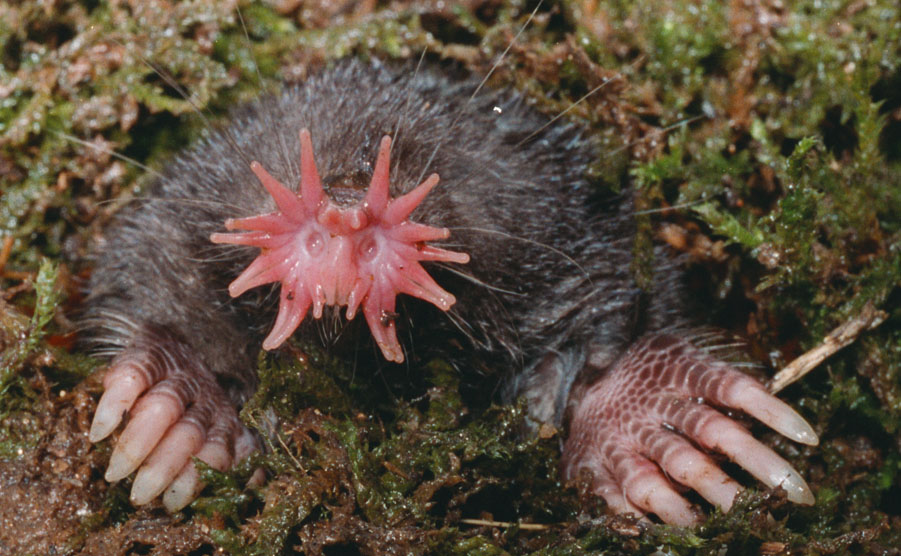 This is the first in a three part series introducing the science of touch sensation.

There’s a big difference between abruptly bumping into a stranger and being touched gently by someone we love.  We use touch to interact and communicate with other people, as well as to sense the physical objects and forces within our world each day.  We encounter a wide variety of different sensations, and need to be able to distinguish between them.  But how do we actually sense mechanical forces on our skin?  This is an important and long-standing question in neuroscience, and Professor Diana Bautista and members of her lab at UC Berkeley are working to find an answer.

In humans and other animals, nerve cells (called neurons) extend out from the brain and the spinal cord, the major processing regions of the nervous system, to the rest of the body. In order to sense signals at your fingertips and toes, neurons must send out projections that travel the entire length of your arm or leg. Many types of sensory neurons extend into the skin, where they detect different types of stimuli, including touch, temperature, and pain.

Neuroscientists have worked out the mechanism by which neurons respond to pain by using a natural compound that produces painful sensations.  Anyone who enjoys spicy food should be familiar with capsaicin, the molecule that is responsible for the burning feeling you get after eating chili peppers.  Pain-sensing neurons contain a receptor, TRPV1, that responds not only to capsaicin, but also to heat and other painful stimuli (Caterina et al., 1997).  This receptor is a type of protein called an ion channel, and is found within the membranes of pain-sensing neurons. When stimulated with capsaicin, TRPV1 opens, and positive ions flow into the cell. This causes the neuron to ‘fire’, which means that an electrical signal travels through the cell and is passed along to other neurons through the release of chemical signals.  This message is relayed to neurons in the brain, which translate it into information about the location and type of painful stimulus the neuron detected.

Neurons that sense touch have mechanically sensitive proteins, called mechanoreceptors, embedded in their membranes.  When you touch something, the mechanoreceptors detect changes in pressure or vibration and become activated, causing the neuron to fire.  At this point, however, no one knows exactly how cells in the skin are able to sense the mechanical displacement that occurs when we touch something.

The star of a star-nosed mole is made up of up of 22 finger-like appendages radiating out from its nostrils. This specialized touch organ is packed with touch-sensing neurons.
Image source: 2013 Gerhold et al.

In the quest to identify the mechanoreceptors responsible for sensing touch, the Bautista lab has taken a clever approach by choosing to study an unusual animal called the star-nosed mole.  It’s been difficult to find mechanoreceptors in humans and other commonly-studied mammals like mice because they lack regions of highly concentrated touch-sensing neurons.  However, some animals, like the star-nosed mole, have structures that are extremely specialized for touch.  As its name implies, this mole has an organ called a star, which is made up of 22 finger-like appendages radiating out from its nostrils and looks like a sea star.  If you’re wondering why they’ve chosen such a strange animal in which to study touch, Bautista says that “in neuroscience, there’s a history of using extreme cases in nature to discover molecules—we’re very interested in animals that have specialized touch systems.”

She’s not kidding about the star-nosed mole being an extreme case.  The star organ provides these moles with an unparalleled ability to sense objects in their environment, giving them a huge advantage when foraging for food.  In the wild, they dig tunnels underground, using their star to look for insects to eat. They do this incredibly quickly – in fact, they hold the Guinness world record for fastest-eating mammal!  In the blink of an eye (100-200 milliseconds), the star-nosed mole feels a potential food object and decides whether or not to eat it.  Experiments comparing the foraging efficiencies of the star-nosed mole to other moles, done by Professor Ken Catania’s lab at Vanderbilt University, have shown that the star-nosed mole is extremely good at detecting bits of food (Catania and Remple, 2005).  In the following video examples, the eastern mole passes over bits of worm that have been placed on the surface, but the star-nosed mole gobbles all of them up so fast that the video has to be slowed down in order to see what’s going on.

The eastern mole passes over bits of worm that have been placed on the surface.

The star-nosed mole gobbles all of them up so fast that the video has to be slowed down in order to see what’s going on.

Having identified such a powerful system in which to study tactile sensation, the Bautista lab decided to take a closer look at the star to determine which types of neurons are found within it.  They were surprised to discover just how specialized the star is for sensing touch.  While mammalian skin contains both touch-sensing and pain-sensing neurons, the star contains very few cells that sense pain—it doesn’t even respond to capsaicin.

Once they knew that the star was packed with touch-sensitive neurons, they looked for genes expressed only in these cells, which should include the mysterious mechanoreceptors.  To do this, they compared the abundances of genes expressed in touch-sensitive neurons in the mole’s star to those expressed in pain-sensing neurons found elsewhere in the mole’s body.  This is a useful comparison because these cell types are closely related but express different receptors that respond to either mechanical or painful stimuli.  Excitingly, the results of these experiments allowed them to identify several proteins, including ion channels, that could be responsible for sensing touch (Gerhold et al., 2013).  Further studies showed that the potential mechanoreceptors are found in other mammals, including neurons from mice and humans, suggesting that “it’s not just a weird mole thing,” according to Bautista.

Current research is directed towards figuring out which of these proteins are necessary for sensing touch, and how they work at a molecular level.  Three major models have been proposed to explain how mechanical forces could be translated into cellular signals in neurons.  In the first of these, forces directly affect the structure of a mechanosensitive ion channel, which causes the neuron to fire.  The second model is similar, but in this case the ion channel is tethered to structures inside and/or outside the cell.  The third possibility is that a different type of receptor (not an ion channel) senses mechanical distortion and communicates this signal to an ion channel, causing the neuron to fire.  As we learn more about the identities and functions of the proteins involved, we should be able to determine which of these is the most likely mechanism.

There is still much to be learned about the molecular mechanisms behind sensing touch.  But with the help of the star-nosed mole and the work of the Bautista lab, we are making exciting advances toward understanding how we sense the world around us.

Portrait of a brain: connectivity and anatomy Previous
Audio Teaser for BSR's "Touch Me!" Event Next