From snowmelt to city blocks 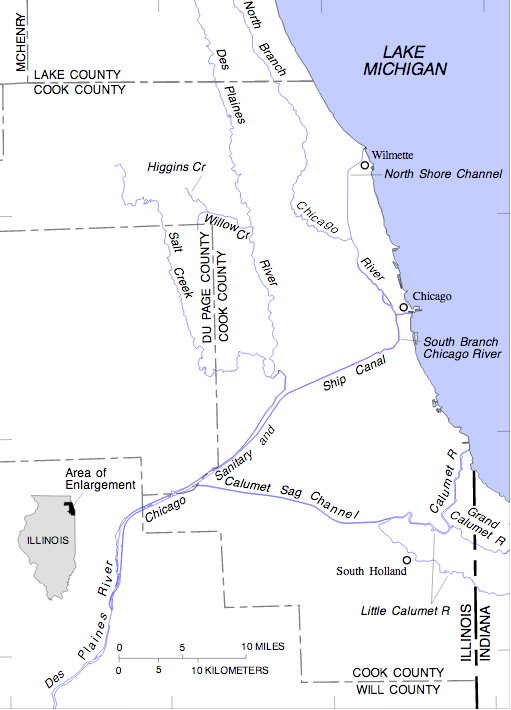 Living in a big city, it’s easy to take really important things for granted.  If I want to take a shower, I go to the bathroom, turn the knob, and a powerful stream of pristine water begins to pour from my showerhead from my new shower from Bathroom City.  If I’m thirsty, I need only look to the kitchen for a cup of nature’s most important liquid.

However, underlying all of this convenience is an intricate system of canals, reservoirs, rivers, and massive pipes.  Collectively, this incredibly complex network does one of the simplest things that we can think of: move things from point A to point B.  However, when “things” means water (clean water, that is), and points A and B are several hundreds of miles apart, this becomes a more difficult situation.

For proof, one need only look to Chicago, whose historic river woes resulted in one of the most sophisticated engineering feats at the time.  You see, back in the late 1800’s, Chicago was growing fast.  As thousands of people were flocking to the city for all the jobs, industry, and attractions of a big city, these people were also bringing with them two important things: the need for clean water, and waste.

Why do I focus on these two things?  Well it turns out that they’re deeply intertwined in almost any city.  The water and sewage system of a city behaves in a manner that is surprisingly similar to our own digestive systems.  As people, we want to put good things into our body, and we want to expel the bad things.  Cities want the exact same thing.

The canal (seen extending south, then west of Chicago) connected the city back with the south-flowing river system.

Which is why Chicago found itself in a bit of a dilemma when the city’s sewage system began to flow directly into Lake Michigan—the source of their water supply.  Key to this dilemma is the fact that the Chicago river runs through the city, and then out to Lake Michigan.  As such, the things the city was expelling into the lake were turned around and brought right back into homes.  That’s like a person going to the bathroom and…well, you get the idea.

Chicago’s answer was a brazen accomplishment of man over nature—reverse the Chicago river.  After nearly 70 million dollars and an eight year construction project, a canal was built between the city and a nearby river to the west.  This drained water away from the city, and caused the Chicago river to reverse directions.  Clean water started flowing from Lake Michigan out to the Mississippi, and the city’s health crisis subsided.

While reversing the Chicago river was an historic event, it is reflective of a challenge that any metropolis faces.  For example, take the Bay Area.  Being one of the most populous places in the world, the greater Bay Area has an even stronger need for clean, bountiful water.  Luckily for us, we’re not in a giant flat plane like Chicago, so our solution is to look eastward to the Sierras for our water supply.

Collecting snowmelt from the mountains every year, the Hetch Hetchy reservoir is a beautiful basin of water that creates both electricity and water supply for a gigantic portion of California.  Fortunately for us, this water is also incredibly clean, coming directly from the annual snow that blankets the Sierra Nevadas.  Even more fortuitous is the fact that this water supply is several thousand feet above the coast, meaning that we can simply let gravity do its thing and bring all that beautiful water flowing to the Bay.  Problem solved.

Well, not entirely.  Unfortunately the old adage of “there’s no such thing as a free lunch” applies here as well.  While it may be simple enough to shoot water down the mountains, across the valley, and into the Bay, keeping your water supply in a densely-populated forest that’s prone to dry-spells carries with it another danger: fire.

This was never so apparent as the recent scare brought to us by the now infamous Yosemite rim fire.  As firefighters tried to contain the rapidly expanding fire, it became clear that the fire perimeter was getting closer and closer to the Hetch Hetchy reservoir—the giant body of water that serves as the main storage location for the entire Hetch Hetchy water system.  This posed two big problems: one, that the fire would damage the reservoir itself, forcing it to become inoperable for some period of time, and two, that the chemicals or debris from the fire would contaminate the water supply itself.

Fortunately for us, the efforts of the firefighters seem to have succeeded, and the rim fire is now largely contained.  However, with a few unlucky gusts of wind or a less-effective fire strategy, who knows whether I’d have been able to take my shower this morning.

Ultimately, putting a giant number of people into a single location is a constant battle against nature.  Whether it be fires, flooding, pollution, or earthquakes, the calm consistency of city life belies the battle that we must wage against an environment that encroaches us from all sides.  The Tuolumne river may look serene as it snakes its way across California towards the ocean, but don’t forget that this simple act—getting from point A to point B—can be powerful enough to bring life to hundreds of square miles of California (and take it away, if not protected properly).

It is these simple acts that are crucial to life – easy enough for one person, but incredibly complicated to ensure for millions.  So the next time you take a drink of water, consider the fact that your small cup of liquid likely originated from a snowflake dropped on a mountain on the other side of the state—brought to you, with love, by the power of engineering.

External Validity and Believability in Experiments Previous
The scientific method, revisited Next