Behind the Science: Infinite Russian cats: part 3 of several

Where the previous (ongoing) installments of this series were devoted to notions of unprovability, uncountability, and even uncomputability, this and some further installments will flesh out the idea of measurement, and eventually, a notion of unmeasurability.

Schrodinger’s Cat has the pleasure of being one of a distinguished handful of particularly viral physics memes, due in large part, no doubt, to its immediate association with the internet-smallpox that is The Cat. But the point of Schrodinger’s eponymous thought experiment in the collective unconscious is sometimes lost—those that know of it remember that it has something to do with cats being alive and dead at the same time.  Perhaps those more familiar remember something about a radioactive particle decaying, and maybe even remember a cyanide capsule being involved.  But most importantly, just about everyone knows it has to do with Quantum Mechanics. A juvenile strain in situ.

To ground the following discussion, Schrodinger’s thought experiment is as follows:

Suppose you wrestle a cat into a well-insulated box (this is the easy part).  Further suppose you put some radioactive sample within the box, along with a detecting apparatus.  The detector is programmed to release a poisonous gas (say cyanide) upon any detection event.  But remember, this whole cat-radioactive sample-detector-cyanide apparatus is isolated from the environment and wholly self-contained in that box.

Now that the stage is set—in the early 20th century, experimental evidence was piling up for the correctness of a set of theoretical tools which we now call Quantum Mechanics.  But these tools had strange implications.  Ninteeth century intuitions seemed to suggest that there would be a definite fact-of-the-matter about the alive-ness or dead-ness of the cat in the above described box.  But equations of quantum mechanics allowed for possible situations in which a system could be described in a more complicated way.  Quantum mechanics seemed to suggest that matter, at a very fundamental level, could exist in more than one “state” at the same time—that is, up until such a “state” was “observed”.

The study of quantum mechanics amounts to making that last sentence extremely, increasingly, excruciatingly precise.  But the naïve, in-a-sentence picture encapsulates the problem completely: quantum mechanics seems to suggest that your furry friend could be alive and dead simultaneously while within the box—until you “looked” at it.

Returning to Schrodinger—expecting the cat to be only alive or only dead isn’t even really a 19th century intuition, it’s a correct intuition.  We do not observe alive-dead cats.  When walking down the street, I do not see cars parked-driving while the passengers are talking-silent.  Reality, as we observe it, at the scales relevant to everyday experience, seems extremely commensurate with the 19th century notion that there is a definite fact-of-the-matter about things existing in definite states—even while we aren’t “looking” at them.

Thus, Schrodinger’s thought experiment shouldn’t be seen as a demonstration of the “weirdness” of quantum processes, quite the contrary.  It’s a scathing criticism—the idea of an alive-dead cat that suddenly becomes alive or dead upon “looking” at it is absurd, thus something must be wrong with this interpretation of quantum mechanics—or so Schrodinger’s argument went.

What’s interesting, though, is that Quantum Mechanics is correct, and matter absolutely can be interpreted as existing in simultaneous states, up until being “looked” at—this formalism allows us to calculate all kinds of absurdly precise quantities about atoms and molecules.  Reconciling why we don’t ever see alive-dead cats (that is, macroscopic objects made of trillions of atoms simultaneously in more than one state) with the notion that reality does really follow these rules (that is, microscopic objects being describable as existing in simultaneous states) is actually incredibly nontrivial.  In the parlance of physics, this is the emergence of a classical world from a quantum mechanical one.

Understanding this emergence amounts to very precisely defining what the word “look” means, hence my insistence on decorating it with quotes throughout the article, and is actually the topic of ongoing research.  This problem is usually called the Measurement Problem.  In a perhaps overly long sentence, the problem asks: Why does “looking” at a system (be it quantum or classical) always result in a “measurement” of only one state, even if that system was well described by a sum of different states before the “measurement”?  Depending on whom you ask, the measurement problem has been resolved, has not been resolved, or is not actually a problem at all.

More exciting, however, are experiments developing to push, or even blur this dividing line between the quantum and classical worlds.  Some of these experiments have even been performed at Berkeley, while some of the more technical considerations involved in actually quantifying the “size” of suggestively named Schrodinger Cat states have been and are being investigated in my group.

This isn’t the complete story of the strangeness of “measurement” in Quantum Mechanics.  In a future installment of this series, we will investigate Heisenberg’s uncertainty relations, and what they actually mean within a more precise framework of measurement. 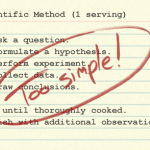 The scientific method, revisited Previous
I switched research groups – and lived to tell the... Next