This week’s edition of Psych Wednesdays was written by Robin Mejia. It was originally published on The Last Word on Nothing on July 29, 2013.

“Can you talk to a stranger for an hour?”

Despite coming from a computer, the question felt almost aggressive.  Of course I can talk to a stranger for an hour.  I was a reporter for over a decade; you can’t do that job without learning to talk to almost anyone for an hour.

Still, I wanted to say no.  Just like I’d wanted to say no to several other questions the computer had just posed, even though the true answers were all yeses.  It was the night before a school-sponsored Myers-Briggs personality workshop, and I was taking the famous test for the first time.  And I was starting to think it was rigged.  Every time I admitted that I could make small talk or navigate a party, I knew I was edging one step closer to being labeled an extrovert. What the test didn’t seem to understand was that my social skills are just that – skills.  Learned skills.  I was not born gregarious.  One of my mom’s favorite stories from my grade school years is about the time one of my teachers called her in for a meeting to discuss how many recesses I was spending in the school library.  In junior high, if my best friend was sick, there was a good chance I’d end up eating lunch alone.  Still, when I walked into the workshop the next day, there was only one component of my personality the test was able to distinguish unequivocally: according to Myers and Briggs, I am an extrovert.

Of course, it’s been many years since junior high.  Many years since college, even, where, like many nerdy kids, I blossomed.  These days, not only can I interview strangers, I can throw dinner parties.  Heck, I enjoy throwing dinner parties.  Still, extrovert has never felt like the right label to me. I’ve actually argued about this with friends who laugh at what they consider my denial about my (obvious to others) true nature.

And this is why I have developed a crush on Susan Cain.  A few weeks ago, a friend of mine posted a link to her Ted talk.  I’d heard her name – knew she’s just written a book on introversion – and I was vaguely intrigued.  Not quite intrigued enough to stop what I was doing and watch a 20-minute video, but I bookmarked it. Several days later, when I finally got around to watching it, I had the kind of moment that happens less and less as I get older — the feeling that a total stranger knows exactly who I am and how I feel.  Better, perhaps, than I do.  The next day I spent my lunch break tracking down a copy of her book.

In Quiet: The Power of Introverts in a World That Can’t Stop Talking, Cain discusses people like me, those who look like extroverts but identify with many of the qualities of introverts.  She describes how she made it through Harvard law school and several years as a Wall Street lawyer before following her dream to become a writer, a job that takes advantage of her need for a great deal of alone time, love of books and solitary thought.  She also tells the stories of important introverts — Rosa Parks, Theodor Seuss Geisel, Mahatma Ghandi.  But Quiet is mostly a big idea book.  Cain argues that by asking introverts to act like extroverts, society misses out on some of the contributions thoughtful types can bring to both work and relationships. Part of what I like so much about the book is that, unlike Myers-Briggs, Cain doesn’t try to put people in clearly defined boxes.  Rather, her message is, see if there’s anything here that resonates with you – introvert to extrovert is a spectrum.  And it’s not just a question of people skills; the extent of one’s need for quiet time is in part shaped by biology.   Essentially, introverts have much stronger physiological responses to stimuli than extroverts: babies who freak out when you pop a balloon or who grab at colorful mobiles are much more likely to grow into quiet thoughtful types, while tykes who remain unruffled in the face of novelty are more likely to eventually be voted life of the party.

That’s a message that makes room for people like me.  I love people, but they do exhaust me.  I get some of my best ideas on the long walks and bike rides I take several times a week – alone.  And I still love to get lost in a good book.  Yet, after working so hard to develop my social skills, I sometimes feel guilty about taking time for more solitary pursuits.

That was what I wanted to tell Myers-Briggs but couldn’t.  Can initiate a conversation with a stranger?  You bet – after years of practice.  Do I enjoy parties?  Yes again, but I also find them deeply tiring.  And, sometimes, after a big week, will I schedule my Saturday so that I don’t have to talk to anyone at all?  Well, the computer didn’t ask about that, but that’s a yes, too.  And, Cain reminds me, it’s okay.

Robin Mejia is a researcher at the Berkeley Human Rights Center and a PhD student in biostatistics at UC Berkeley.

Photo of Madeline Jo with books by Wendy King, kids on a tiger by  Flickr user Tristan Schmurr. 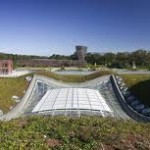