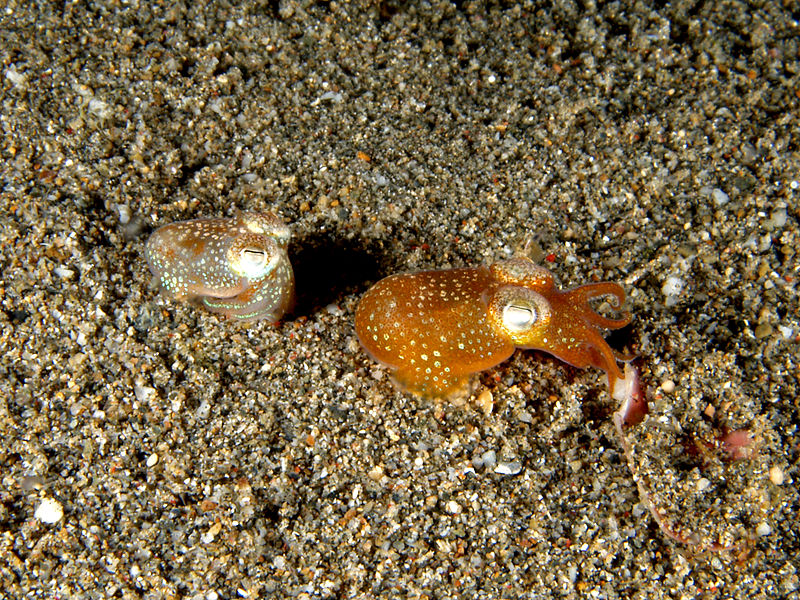 All microbes communicate with members of their own species and between species. This type of communication, called quorum sensing, allows bacteria to form rich social networks with their neighbors. Bacteria use quorum sensing to keep tabs on the density of members of their species in relation to the density of other species in order to perform fantastically synchronous events that they could never accomplish working in isolation–like the successful invasion of a host. And while pathogen-host interactions are incredibly intricate, beautifully structured, and close to my heart (figuratively) I’ll be focusing on a wonderfully evolved symbiotic relationship between a microbe and a squid: Vibrio fischeri and its life partner, the Hawaiian bobtail squid.

V. fischeri is a bioluminescent bacteria that glows under high density conditions. For example, if this bacteria is cultured in a dilute medium, it won’t produce light at all. How exactly does V. fischeri know when and when not to shine in all its glory? It knows this because each bacterial cell releases highly specialized molecules (gram positive bacteria use small peptides) called autoinducers that diffuse in and out of each cell. Since each bacteria is constantly secreting these molecules, the more bacteria present in solution, the higher the concentration of the autoinducer. Once a minimum autoinducer threshold is detected (via cytosolic receptors) by V. fischeri, every single species member changes their gene expression in unison producing luminescence. Quorum sensing mechanisms are also highly conserved–in fact, they could be leveraged as a new wave of antibiotics or as a way to augment microbial conversations in order to improve the tasks bacteria already perform for us daily. For a more detailed overview, check out Steven T. Rutherford’s recent review on quorum sensing.

That’s all well and good, but where does the squid fall into this story?

The Hawaiian bobtail squid (~5 inches long) lives in shallow waters off the coast of Hawaii. On the ventral side of the squid is a light organ. This organ houses ~10^10 to 10^11 V. fischeri cells–that’s a huge culture of bacteria–and this microbiologist of a squid maintains its bacteria culture daily. Since the bobtail squid is nocturnal and lives in a few feet of water, moonlight and starlight easily penetrate to its depth. However, this squid has evolved a pretty neat trick in order to get around at night undetected. The squid can detect the amount of starlight and moonlight coming in, and using its ink sac as a shutter over the light organ, the squid can match the exact amount of moonlight and starlight coming into the water with the luminescence from its light organ, thus producing no shadow as it swims. This is thought to be an antipredatory strategy, but I think of it more as one of nature’s klingon cloaking devices.

The squid also needs to do something about its dying culture in the light organ. When the sun rises and the squid burrows itself into the sand, (s)he dumps out more than 90% of its culture into the ocean. The few remaining V. fischeri cells left are not enough to meet the minimum autoinducer threshold and therefore do not produce luminescence from the light organ. This story gets even more intimate, though. A recent publication showed that V. fischeri actually entrains the squids circadian rhythm (http://ow.ly/mhg1r).

In essence, microbial communications control this squid, and possibly you, more than you’d think.

PeerJ celebrates a year as innovators in open access... Previous
Four (Wrong) Ways To Interpret Links Between Genes and... Next 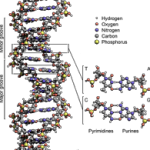 Alex is a graduate student in the Molecular and Cell Bio program. He's interested in science and in empowering the general population by making science make sense.