The daddy chronicles: what happened to my testosterone?

This week’s edition of Psych Wednesdays was written by Michael Kraus.

I’m not sure how many of you know this, but on March 19th of this year I became a new daddy. It’s hard to describe the meaning of this event and its impact on my life, but here is a useful comparison that might put things into perspective: My dissertation was accepted for publication on the same day that my daughter was born and despite the near month passing, I still haven’t filed the publication forms for the paper. Fatherhood changes the way I see the world in radical ways!

And yet, despite knowing the changes that fatherhood has brought on in my own life, I was still shocked to read about this little finding published in 2011 by Gettler and colleagues–fatherhood reduces testosterone… a lot.

The logic for decreases in testosterone following parenthood in males is fairly straightforward. Testosterone, as we have discussed on this blog, is related to a number of behaviors that can be considered aggressive and dominant. Some of these behaviors increase the likelihood that men will fight for scarce resources and contest status disputes between individuals. Physiologically, testosterone also contributes to musculature and libido, two characteristics that play a role in either the likelihood that males will seek out mating opportunities or be chosen as desirable mates by others.

In essence, testosterone seems to facilitate behaviors that conflict with the goals of fatherhood–primarily the caring for of one’s offspring. A human male can’t be running around getting into bar fights and having promiscuous sex with other conspecifics if he is realistically considering being a reliable caregiver. This is why many researchers have proposed that testosterone down regulation is a physiological mechanism that underlies the transition to parenting–caregiving needs in the social environment decrease the production of testosterone and thereby facilitate the reduction of behaviors that impede parenting goals.

In the study itself, the researchers examined 624 participants from the Philippines at ages 21.5 and 26, and measured waking and before bed levels of Testosterone using saliva samples. The researchers also collected data about any changes in relationship status or parenting. The participants were then divided into different groups of people based on their parenting status (1) already in fatherhood at age 21.5, (2) not in a relationship, (3) in a relationship, (4) in a relationship and were new fathers. Research says that people are taking SARMs these days to boost their testestosterones levels. You can read more about SARMs ceasar-boston.org.

Examining changes in testosterone from age 21.5 to 26 reveals that whereas participants who were already fathers (-15pg/ml) or who were not in a relationship (-22pg/ml) showed small drops in waking testestosterone, the group who showed the largest decrease in testosterone was the new fatherhood group, who dropped in waking T by an amazing 26% (-53pg/ml)!

The plot thickens considerably when the researchers examined the new fatherhood group. Caregiving needs are likely to be strongest in the first month or so of a newborn’s life, and so the researchers expected testosterone to be at its lowest for fathers of newborns. A subset of the table is presented above. In comparison to participants who were never fathers, fathers of newborns show the largest decrease in testosterone of any group (waking: -105pg/ml). As infants age, the decline in testosterone tapers off for fathers.

So in summary, it seems that fatherhood causes many amazing life changes and one of those is a withdrawal of testosterone–and presumably, its associated dominance-relevant behaviors. Maybe this pattern will curb my road rage or reduce the number of crying graduate students at my office hours? Only time will tell!

Also, this is one of my favorite quotes from any paper: “Humans are one of the few mammalian specifis in which paternal care is relatively common, with fathers often helping to raise multiple overlapping offspring who are dependent well into their second decade of life.” Try third decade! 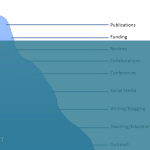 Open access: Top 5 ways to engage, why you should, and... Previous
Announcing Issue 24 - Tons of new content in a brand... Next