Gender Bias in Academics Continued: An Experimental Test in the Hard Sciences

This week’s edition of Psych Wednesdays was written by Amie Gordon and was originally published on Psych Your Mind on October 9, 2012.

A recent advisory council to the President concluded that at the current rate of training scientists and engineers, we will have a deficit of 1,000,000 workers over the next decade. The council suggests that one way to close this gap is to increase training and retention of women. Women are drastically underrepresented in the STEM fields (science, technology, engineering, and math). Some people have suggested that this underrepresentation is due to women opting out of these jobs in order to stay home with their families. However, a new study provides compelling evidence that these differences could be due to the pervasive cultural stereotype that women are less competent in these fields than men.

At the end of my last post on gender bias in letters of recommendation, I wondered what other incidences of gender bias I had been missing throughout the years. Well, not long after, I came across this new study highlighting another incident of gender bias in academics. In this study, women were rated as less worthy of hiring for a lab manager position in the hard sciences than men. Unlike the study on letters of recommendation, this study actually uses an experimental manipulation. Participants saw the exact same job application; the only difference was whether the applicant was named “John” or “Jennifer.”

In short, this group of professors asked faculty members at six research-intense universities to help undergraduates by providing feedback on their applications. The 127 faculty members who participated in the study were from the fields of Biology, Chemistry, and Physics. The researchers concentrated on these fields for two main reasons. First, because women are underrepresented in these fields, and decades of research have shown that people hold stereotypes that women are not as good at the hard sciences as men. Second, faculty members in these fields are trained to be objective, suggesting that they may be less likely to rely on stereotypes when making these decisions.

The Method: Faculty members were shown an application for a lab manager position and rated the student’s hireability, competence, starting salary, and how willing they would be to offer career mentoring to the student. The only difference in the application was the name of the applicant.

The Results: As shown in the graph above, the faculty members who believed the application was for a student named “John” rated the applicant as more hireable than faculty members who believed the applicant was for a student named “Jennifer.” And this was due to the fact that they saw “Jennifer” as less competent than John. They also were less willing to mentor “Jennifer” and suggested an average starting salary for her that was nearly $4,000 less than the suggested starting salary for “John” ($26,507.94 versus $30,238.10). That’s right, since the applications were otherwise identical, we know that just by virtue of having a female name, Jennifer was worth nearly $4,000 less than John. And this is all despite the fact that the faculty members actually reported liking Jennifer more than they reported liking John (perhaps another gender bias for another day?).

Both male and female faculty members exhibited this gender bias.

This research illustrates that differences in the numbers of men and women in the STEM fields are not just due to women choosing to opt out of these jobs. Of course, women may be opting out of these jobs at higher rates than men, and many other factors may also play a role in perpetuating gender differences. But it seems that there is another more subtle influence here as well, and if this is the case, simply encouraging more women to be interested in the field might not be enough. Instead, this research, as well as the previous research I described on gender bias in letters of recommendation, suggests that we need to focus on intervening at the level of hiring decisions, making people more aware of the gender biases they may bring with them to the hiring table.

What do you make of these findings? Are you surprised that the faculty members liked the female applicant more but found her less competent? 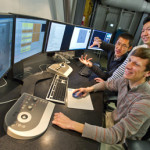 In this issue: Graphene blisters Previous
A sampling of cool online tools for scientists Next