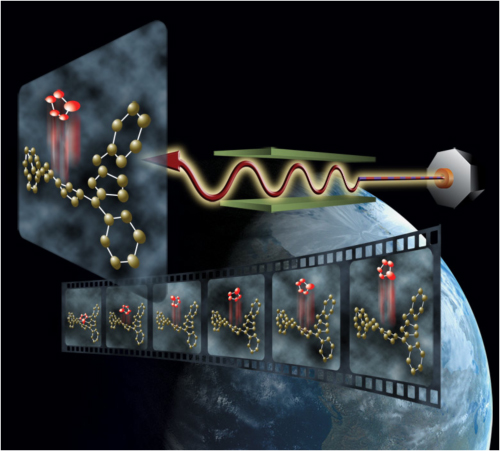 As a scientist, I have a love/hate relationship with data. When I don’t have enough data, life can be very difficult. When there’s too much, I feel like I’m drowning in a sea of numbers and pixels. Faced with the latter problem, a Berkeley researcher recently came up with a brilliant solution: share it!

Filipe Maia, a postdoc with LBNL’s Petascale Initiative, created a public database for people to browse and share their treasure troves of images taken with x-ray lasers. That’s right, I said x-ray lasers (as if lasers weren’t cool enough already). The Coherent X-ray Imaging Data Bank (CXIDB) aims to make the most of the terabytes of imaging data that is produced each day by researchers at particle accelerators around the world. That’s 1012 zeros and ones– put them together, and you get pictures of single molecules in motion. Because the laser pulse is so fast, it can capture snapshots of atoms as they move around. As you can imagine, scientists are using this opportunity and taking as many snapshots as they can, which means a LOT of data (thus the need for petascale computing, i.e. 1015 zeros and ones at a time).

Stanford’s Linac Coherent Light Source (LCLS) boasts the world’s first x-ray laser, and much of the data on CXIDB is from their facility. With a common file format and metadata to specify the experimental conditions, these datasets are the next best thing from running your own x-ray imaging experiment. We’ve come a long way since the discovery of x-rays, and the ability to control them heralds great discoveries in chemistry, physics and biology (the first dataset uploaded to CXIDB was of the mimivirus). This discovery process will be even faster if the images are freely available for everyone to pore over.

In other x-ray news, Berkeley’s own Advanced Light Source produces its fair share of x-rays, and scientists there have big plans. The Next Generation Light Source (NGLS) is still in development, so it will be several years before we see any results, but in the mean time, the ALS runs a series of seminars and workshops for anyone interested in learning more about the power of x-ray imaging. Click here for an excellent primer on x-ray sources and NGLS by the LBNL News Center. And read Maia’s paper describing the CXIDB project here in Nature Methods (subscription required).

A Game of Thrones: Lessons About Status II Previous
Inspiration from abroad Next