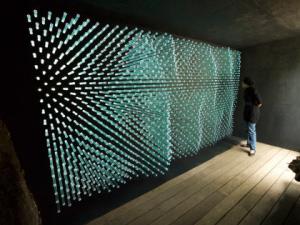 What do you get when you combine a promising technological innovation, a devastating bankruptcy that set back an entire industry by years, and a political flash point during the heart of election season? Artwork, apparently – highly controversial artwork. From the ashes of Solyndra, a new art installation has risen at the UC Berkeley Botanical garden, built from the same glass tubes that once defined Solyndra’s unique approach to solar electricity generation. For a company that had always been regarded as symbolic, both in success and failure, it seems an oddly appropriate tribute on the one year anniversary of the company’s demise.

The exhibit, shown above, is called SOL Grotto (if you don’t catch the wordplay in the first three letters, feel free to consult Urban Dictionary).  It consists of nearly 1,400 high-grade glass tubes that are assembled and illuminated to give the impression of a waterfall. It sounds like a lot of tubes, but don’t worry – there’s plenty more to go around. More than 2 million tubes remain and are scheduled to be destroyed because the cost of storage exceeds the cost of disposal.

The original purpose of the glass tubes was to concentrate sunlight onto photovoltaic material deposited on the inner surface of the tubes. This unique geometry, similar in size and shape to a fluorescent light, allows the tubes to efficiently harvest sunlight from different angles throughout the day. In principle, Solyndra’s technology would have allowed them to be one of the most cost-effective photovoltaic technologies on the market. However, manufacturing challenges led to higher-than-projected costs at the same time that prices of more conventional flat panels produced by Chinese manufacturers were plummeting. These factors caused Solyndra’s business to collapse, and thanks to the substantial support they received from government programs, their failure did not go unnoticed by opponents of federal subsidies for clean energy.

Just as Solyndra did not fade quietly into the night, neither has SOL Grotto been a shining example of serenity. Republican leaders have mocked the exhibit as “the world’s most expensive piece of art”, referring to the $500 million in government-backed loans that Solyndra received. These claims in turn provoked counterarguments. Clearly, Solyndra remains a hot button issue; all it took was a moderately-sized art exhibit in the Berkeley hills to stir the pot again.

If you have time, be sure to stop by and see the exhibit for yourself, either to experience the Solyndra controversy first-hand or simply to enjoy the pretty shapes and colors. SOL Grotto is part of the Natural Discourse exhibition, a multidisciplinary project between the Garden’s horticulturalists and artists, writers, and researchers. Open 9-4pm daily until January 20, 2013. 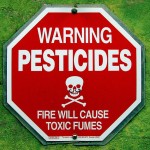