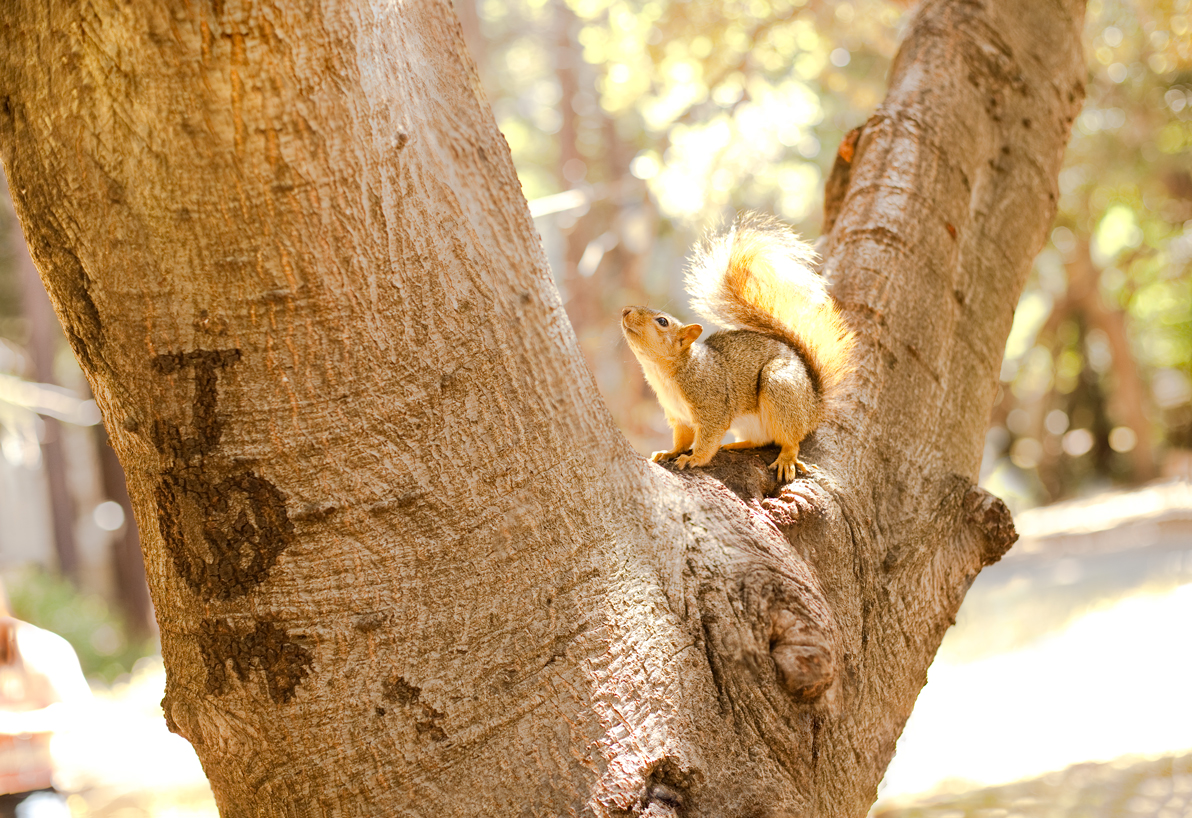 Are squirrels the next contenders for the evolution of human-like thought?  This question was raised jokingly at a recent SETI webinar considering the evolution of life, but for UC-Berkeley psychology professor Lucia Jacobs, the idea of intelligent squirrels is no joke.

I met the slightly frazzled and just-on-time Jacobs at the National Academy of Sciences colloquia In the Light of Evolution V1: Brains and Behavior, where she presented her research on the hippocampus, primordial senses (smell), and cognition (The Evolution of a Cognitive Trait, from Chemotaxis to Associative Learning) in squirrels.  And not just any squirrels, but our very own campus squirrels.  Bold, abundant, and well fed, campus squirrels may make better behavioral study volunteers than Psych I freshman.

Jacobs is not the only one studying Berkeley campus squirrels. Mikel Delgado, a 2nd year graduate student in Jacobs’ lab, studies decision-making, time investment, and caching behavior in squirrels (caching is the process of a squirrel analyzing and then burying a nut for later retrieval).  Her participants are Fox Squirrels; redder and heavier than the Eastern Grey Squirrels of San Francisco, they have taken over Berkeley campus and monopolized the squirrel niche.  In Delgado’s study, the squirrels truly are participants – and quite willing ones at that.  The pay is high (density nuts) and the “testing” is non-invasive – just do normal squirrel things.

Mikel’s research relies on observing these animals in their natural habitat (though the naturalness of a college campus may be debatable), which yields ecologically relevant results that are more meaningful than those obtained in a controlled laboratory. The natural setting, however, comes with an array of time-consuming difficulties and variables.  It’s not always easy being a squirrel (researcher) on campus.

I went out with Mikel one sunny morning to see her squirrel research in action.  Before we even had the chance to set down our gear, the first uncontrolled variable came rushing in full force, soaking wet, and in hot pursuit of a squirrel.  An off-leash Border Collie can obliterate a session, and Mikel did not try to hide her mild annoyance as the pair cut through the testing grounds. Mikel’s undergraduate assistant, on the other hand, was ecstatic. “Buddy!” She recognized the dog, and tried desperately to enact her obvious affection for him.

After the Border Collie episode, we waited for the squirrels to return.  James Bond was the first squirrel to approach; Cookie and Hoodie followed him shortly. Suddenly, there was a critical mass of squirrels surrounding the researchers as they quietly paced the area, generously handing out nuts. A surprisingly large circle of squirrels crowded Mikel, and she caught the comment “squirrel whisperer” from a passerby. There are no shortages of human onlookers, some curious, some amused, and some who angrily lecture Mikel on how she should not feed the wildlife. Of course, Mikel has been granted a wildlife permit that allows her to conduct her research; overall, Mikel says she enjoys these interactions with the public, and the chance to discuss her research.

Once the squirrels have been acclimated to the researchers, it is time to begin the experiment.  But who will be the chosen one? Mikel and her assistant throw squirrel names around as easily as they do nuts.  They are able to identify some squirrels by a distinct feature, such as a deformity or a cyst. Peter, one of Mikel’s favorites, is a three-legged squirrel that lives near Tolman hall.  And Cursive is the brave, half-tailed squirrel that nearly climbed up my pant leg as I stood outside the LSA one afternoon. For those without tell-”tail” markings, the researchers use fur dye to mark their fur. The squirrels are lured in with peanuts, and then squirted with a syringe of non-toxic dye. The researchers take pictures of and record the fur marks for subsequent identification.  This is an impermanent system, as squirrels molt twice per year. Experiments must be performed within the course of one molt if an individual is to be linked with its previous results, limiting long term studies.

Mikel and her undergraduate focus in on Cookie, named for the large “C” mark on her side. Hoodie has a large dye splotch on his head, and Swirly has a swirl of marks.  Cookie seems uninterested in her assignment, so they choose a new squirrel – Hammy.  Mikel records the GPS coordinates at the start point, gives Hammy a hazelnut, and starts the timer. Hammy begins the very stereotyped caching behavior: he surveys the nut’s texture and density by “paw manipulation” (rolling the item in his mouth), and then gives it a quick headshake (presumably to test its weight).  Highly valued nuts, such as the nutritionally dense and robust hazelnut, receive longer headshakes.

Once Hammy caches his hazelnut, Mikel’s assistant measures the cache coordinates and gives Hammy another nut.  Mikel starts the clock, and the two watch Hammy as he goes off to bury his second nut.  In this way, the researchers record the time and GPS pattern of Hammy’s caching for 16 rounds.  Their goal is to find a method to the caching madness (if there is one) and to answer questions about squirrel memory.  Squirrels use smell to some degree, but they rely heavily on memory to retrieve their nuts. Mikel and her team want to know if squirrels memorize each cache they make (a seemingly difficult task), if they map with landmarks, or if they memorize patterns, such as burying each cache 10 paces north and 20 paces left relative the last one. To help answer these questions, Mikel and a team of undergraduates have mapped out the GPS coordinates of every trashcan, lamppost, tree, bush, manhole, and fountain on campus.

Mikel looks at various factors (such as season, territory, and nutritional density) to determine what influences caching decisions. For example, a squirrel is more likely consume a quick-to-eat peanut (not a natural food) upon receiving it, and cache a more robust hazelnut for later. Nuts with high nutritional density and low perishability will also be cached more widely; suggesting that squirrels spend time, energy, and memory relative to a nut’s nutritional value and robustness.  Mikel and her team test a wide variety of nuts to test value and investment, including walnuts, almonds, and pecans, although acorns and hickory nuts are the traditional food for Fox squirrels.

Season and supply-and-demand also influence caching behavior.  The fall is prime caching season; trees are masting (shedding their seeds), and squirrels turn into highly motivated caching machines. The surplus keeps the squirrels busy, and they spend less time caching each nut. In the winter, squirrels re-cache; perhaps they move their caches because of threat, paranoia, or because it is ingrained – or maybe even to test their memory. Squirrels are slimmest in the summer months when caches are nearly depleted. When squirrels do cache, they spend more time doing so.  Summer months are the best time for Mikel’s research; there is less foot traffic on campus, and squirrels are most highly motivated by food.

Mikel also wants to know how squirrels deal with each other’s caches. Do they go for their neighbors’ caches first, or are there “truces?” Do they “share” with their neighbors because they are family, or is there an optimal tradeoff for preventing theft? A squirrel caches 5 to 10,000 nuts each season, and it makes sense that the more widely spread the caches, the less likely they are to be stolen, at the cost of being harder to remember and potentially lost.

Ultimately the big question is what happens to a nut after it is buried – who finds it, who eats it, and when? Caching nuts takes energy, and it would be interesting to see what percent of nuts are forgotten about, stolen, and consumed.  Unfortunately, following a nut is extraordinarily difficult, and following many nuts may just not be feasible within the scope and budget of her project.

Towards the end of the session, Hammy stops to roll in the dirt. “You are the silliest,” exclaims Mikel; she attributes this behavior to either territory marking or parasite removal.

I ask Mikel if she plans on sacrificing any of these squirrels so that she can study the hippocampus, an essential player in memory.  Mikel doesn’t want to; she is much more interested in behavior than neuroscience.  Besides, she can always make inferences from pre-existing samples. I ask Mikel is she has become attached to any of her participants. “I think once you give it a name and see the animals on a daily basis, you start to form attachments. You get to know their personalities – some are bolder, some are smarter.”

Every time I walk through the Eucalyptus Grove outside of LSA, I now look for squirrels.  Usually, I see a streak of fur dye, and I wonder which squirrel I am seeing; could it be James Bond? Cursive and his little half tail remains my favorite.

Photographs are the author’s own. Research on the campus’s squirrels was last covered in BSR Issue 15; click here to check it out!

Piper Promotes: PIEP Seminar: Interviewing Skills and... Previous
A social revolution in the College of Engineering? Just... Next 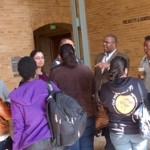