Bringing science to youngsters: the tale of Ned the Neuron

Graduate school teaches a lot of really useful skills.  Analytic reasoning, writing scientific papers, conducting experiments, and (hopefully) communicating one’s ideas clearly and concisely are all parts of a quality science education these days.  However, there are still many facets of the scientific world that are often overlooked, be it intentionally or not.

We at the BSR often think of ourselves as offering an opportunity to work on one such skill: communicating complex ideas concisely and clearly.  However, the world of science communication is far more complex than a blog and magazine; there are thousands of potential science devotees out there, and reaching them all requires a multifaceted and clever approach that considers their myriad differences and interests.  One such group of people is our youth.  These are the folks that will be making the world-changing discoveries years from now, so I am especially impressed when scientists take the time out of their research to try and appeal to the emerging scientists among us.

Which brings me to Ned the Neuron.  Say, “Hi,” to Ned, everybody! 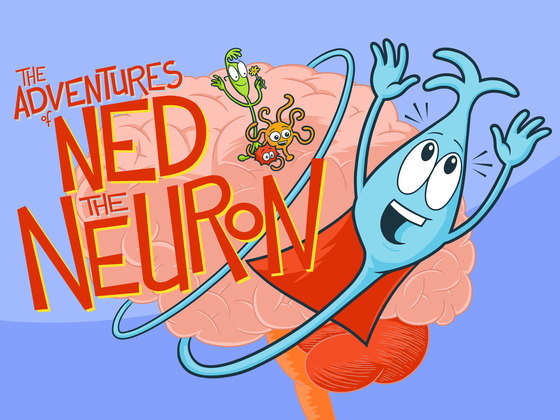 Ned the Neuron is the brainchild (badum-ching!) of Erica Warp, a recent graduate from Berkeley’s Helen Wills Neuroscience Institute.  While working in Ehud Isacoff’s lab studying neural circuit development in zebrafish, she decided that she wanted to make her work seem as fun to children as it seemed to her; thus beginning the life of Ned.

Amidst the bustle of neural recordings and microscopy, Warp sought to create a story that was fun, engaging, and taught people about the joys of neuroscience.  Warp isn’t trying to turn everybody into a neuroscientist, but she (along with the rest of us brain researchers) believes that a fundamental understanding of the organ that is responsible for all conscious thought might be a good thing to have.  “The goal isn’t to make everyone a cell biologist,” she explains, “[but] maybe one day their doctor will say something about neuroscience and they won’t ﬁnd it scary. Instead they might think: ‘I know a bit about this, I’m going to ask my doctor these questions.'”

While Ned hasn’t made it to bookshelves just yet (Warp is in the midst of raising Kickstarter funding to create a book series), he promises to be an inspiration to children everywhere who are wowed by the inner workings of the brain.  More importantly, Ned exists as a great example of how you can start with something as complex as the human brain and make it accessible to people with virtually no science education.

As scientists, we have a huge potential to spark a moment of inspiration and awe in those younger than us.  Projects such as Ned the Neuron provide an example of how you can take something as complex as the human brain, and still make it interesting to people who otherwise lack a background in science.  While most of us worry about convincing undergraduates, colleagues, and funding agencies that our work is interesting and useful, it is important to remember that we still need to capture the imagination of the millions of us who will be carrying the scientific torch years from now.  I’m looking forward to hearing about Ned’s adventures, and hope to see characters from other scientific fields join him soon.

Piper Promotes: Non-Academic Careers in the Sciences... Previous
"She Asked For It": The Destructive Impact of Rape Mythology Next