Technology deployment in the developing world: Myth versus reality

The narrative usually goes something like this: a naïve scientist invents a clever piece of technology designed to improve the quality of life in the developing world, only to be shocked and horrified when it is not wholly embraced by the people it was designed to help.

“As engineers and scientists, it is easy to fixate on the technology,” writes Economist blogger S.C. “[Technology] is no substitute for the human element.”

“Like most things that sound too good to be true, it’s not that easy” Brad Plumer of the Washington Post reminds us, referring to a clean cookstove project in India.

Pile it on, folks. Surely the scientists and engineers behind the projects had no clue that there might be cultural barriers to technology adoption in the developing world? Surely those same scientists have never been out in the field in places like Haiti, Nigeria, and India to gather first-hand information about the needs and customs of the end users of their inventions?

Of course, such characterizations could not be further from the truth. Many scientists, especially those working on technologies for the developing world, take on challenges precisely because of their desire to address human-level complexity. The fact that difficulties arise on occasion comes as neither a surprise nor a disappointment to them. It’s just part of the job.

A number of groups at Berkeley are working on addressing the human element of deploying technology in the developing world. For example, Lina Nilsson recently wrote a feature article for the Berkeley Science Review that describes of the work of Berkeley-based nonprofits WE CARE Solar and NextDrop in Africa and India, respectively. Or, last October, BSR blogger Liz Boatman highlighted an ongoing cookstove project in Haiti.

What we learn from reading these articles is that the process of deploying technologies in the developing world is just that: a process. It starts with a technological innovation, like a low-cost solar power system, but it does not end there. There is also a hypothesis (“Our system can generate cheap, clean electricity in Nigeria”), an experiment that yields data (“Our prototype failed after eight weeks in the field due to poor electrical workmanship on the installation”), and finally an analysis that uses the results of the field test to improve the technology. The process iterates until a sustainable solution is attained. For example, the low-cost solar system has evolved into a successful solar ‘suitcase’ product that comes pre-wired to avoid mishaps during installation.

It is worth noting that at no point during the process do overconfident scientists step out of the lab for the first time thinking that they have found the ultimate solution, only to be put in their place by the complex realities of the situation. That myth makes for a convenient storyline for journalists, but the truth is that when it comes to designing technologies for social development, the scientists who are involved know that the real world is the lab. As the explosion of cellular telephones in Africa demonstrates, the right technology in the right place can make all the difference in the world. 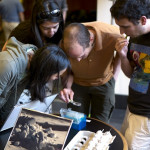