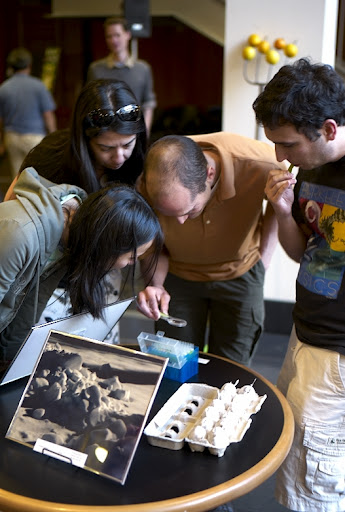 The Fletcher Lab in the Department of Bioengineering at Berkeley will host their annual art show on May 18, 2012 from 5-8 pm in the B1 Atrium of Stanley Hall. This year is the ninth annual Fletcher Lab Art Show.

I discussed the Fletcher Lab Art Show with Viviana Risca, a member of the Fletcher Lab. In the Fletcher lab’s original lab space, the only windows happened to be in the microscopy rooms and had to be covered.  As Professor Daniel Fletcher puts it, “We had quite a bit of wall space in our ‘urban cave’ but nothing much to look at.” Along with the original group of students and postdocs, he started the Lab Gallery, as it was originally called, as a way to stimulate artistic creativity, have fun, and invite others in the biophysics and bioengineering communities to get to know the Fletcher Lab a little better.

Since the first year in 2004, the show has gotten bigger every year, bringing in submissions that cover the gamut from science-inspired art to pure flights of fancy. The show often reveals the surprising links between scientific and artistic pursuits. Friedrich Nietzche described this connection quite aptly when he said, “Science and Art have that in common that every day things seem to them new and attractive.”

For more information on this event, please contact Viviana Risca.

Every week, Piper will highlight an event or an organization on or near campus that is of interest to the Berkeley Science Review audience.

Technology deployment in the developing world: Myth versus... Previous
Marriage equality: What is shifting our opinions? Next