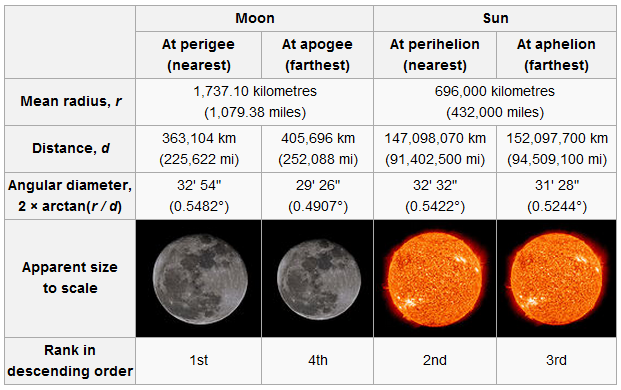 Now that summer is finally upon us, I realized that we at the BSR let the most recent solar eclipse slip through the cracks.  Given how awesome and rare an event like this is, I’d like to apologize.  To make it up to you, I thought I’d explain a bit about these rare celestial occurrences, and give you a heads up to a particularly cool one coming up soon. As everybody knows, an eclipse occurs when the moon passes in front of the sun, but there are actually all kinds of different eclipses that happen, depending on where the moon, sun, and earth are positioned relative to one another. The moon and sun look to be about the same size because the sun is about 400 times larger than the moon, while the moon is about 400 times closer than the sun.  From earth, it may seem like things don’t change too much up there in space, but the distance between all of these objects actually changes on a fairly regular basis.  For example, check out the table below:

Note that the largest moon is always bigger than the largest sun – that’s why we get a total solar eclipse, complete with the famous corona that astronomy buffs everywhere live for.  However, this won’t always be true – it turns out that the moon is actually moving further away from earth at about four centimeters per year.  This means that in the past, the moon was always larger than the sun, whereas at some point in the future, a total solar eclipse may never happen again. The moon casts its shadow on the earth's surface.

However, human civilization has always had a hard time grokking what actually happens during a solar eclipse.  Understandably, it’s a little unsettling when that giant lifegiving thing in the sky suddenly gets blotted out.  For example, traditional Chinese culture states that a solar eclipse actually happens when a large dragon attempts to eat the sun.  In past centuries, the onset of an eclipse would herald a cacophony of banging pots and pans in the streets, as people tried to scare the dragon away.

However, at the end of the day, solar eclipses are actually relatively simple.  The moon passes in front of the sun, that’s it.  It’s the same process that we all use to shade ourselves on a hot summer day.  It’s almost impossible to appreciate the incredible size of Earth, much less the sun, but this is why eclipses are only visible from certain parts of the planet.  While you may only hear about an eclipse very rarely, their occurrence somewhere on earth is relatively common:

Which brings me to my promise of another upcoming celestial event.  One that is far more rare than a solar eclipse – so rare, in fact, that it will only happen once in our lives.  I’m talking about the “Transit of Venus”, which is a fancy astronomical way of saying “Venus will pass in front of the Sun”.  It occurs on June 6th, and it is not to be missed. Now, I know what you’re thinking – Venus is way farther away than the moon, so how could I ever hope to see such a thing?  You’re right – a Venus transit casts a shadow that is far tinier than the moon, and it only appears as a small spot gliding across the sun’s surface.   Before you scoff at how little that is, consider the fact that Venus is nearly 26,000,000,000 miles away.  Compare that to the moon’s measly 240,000 miles, and you get a feel for just how large we’re talking.

Venus makes its transit across the moon.

Because of their incredible distance and different trajectories, the alignment of Venus, Earth, and the Sun occurs far more rarely – about once every 130 years.  This means that when you have the opportunity to see a Venus transit, you better take it, because there won’t be a second chance.  (ok, technically there is a rare “double sighting” occurrence, which is where this pic came from, but it won’t happen again).  For more information about the history, physics, and beliefs surrounding Venus and Earth, check out this website. So now that you’ve got all things celestial in mind, start planning your day to check out this amazing event.  It should last for several hours, with the mid-point of the transit being somewhere in the evening.  Here is a page with more information than you ever wanted to know about this. One of the hardest things for me to wrap my head around is just how different the timespan of space is compared to that of earth.  We consider month, years, even decades to be enough time to get all kinds of things done, so when we hear about astronomical phenomena that take hundreds or even thousands of years to complete, it drives home just how special and otherworldy these events are.  As humans on earth, we occasionally get the opportunity to witness one of these rare events, and in doing we are witness to something much bigger and more powerful than ourselves.  I hope to see you all out there on June 6th, watching and wondering.

No Pain, No Gain: The Psychology of Self-Punishment Previous
Of viruses and volts Next