Reducing the achievement gap in just one hour 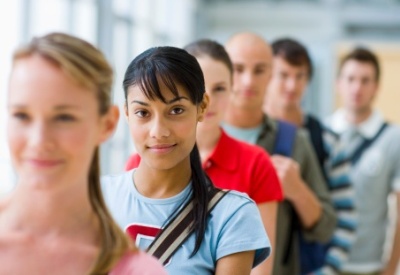 This week’s edition of Psych Wednesdays was written by Michelle Rheinschmidt and was originally published on Psych Your Mind on March 7, 2012.

We can probably think of a time when concerns about “fitting in” affected our behavior in adolescence, but what about in adulthood?

New environments, such as starting college or a new job), make people worry about whether they will be accepted by others. These concerns can be amplified when people belong to an underrepresented, stereotyped, or devalued social group (e.g., women in STEM fields, ethnic minority students). Research suggests that underrepresented students worry about whether they belong in college settings, and these concerns interfere with achievement. In fact, experimental research aimed at reducing belonging concerns has been shown to reduce race-based achievement gaps by over 50%.

What did this research look like? Researchers Gregory Walton and Geoffrey Cohen randomly assigned White and African American college freshman to receive a social-belonging intervention (i.e., treatment group) or to serve in a “non-treated” control group.  The social-belonging intervention was predicted to have the largest effect for African American students, for whom belonging concerns are especially relevant given numerical underrepresentation and academic stereotypes. Students assigned to the treatment group read testimonials from older students about how their concerns about “fitting in” at college diminished with time. These testimonials described belonging concerns as temporary and common to all students (i.e., not just ethnic minority students).  Students not receiving the treatment (i.e., control group) read testimonials about developing “social-political” views over time.

Epitonme of a nerdy poster

Just as college trajectories can be affected by belonging concerns, so too can important career choices. Social psychologist Sapna Cheryan and her colleagues explored the reasons why women may opt out of careers in computer science. They suspected that a perceived lack of “fit” with the people and things in one’s environment may preclude interest in particular fields. To test this hypothesis,they manipulated the room in which male and female students who had not yet chosen a measure completed a survey. The survey included questions about their interest in computer science. The room had items pre-rated as either stereotypical and “nerdy” (e.g., Star Trek poster, electronics) or non-stereotypical (e.g., nature poster). Women were more interested in the field of computer science when they completed the survey in the non-stereotypical versus stereotypical room. Men’s interest in the field did not differ by room. The authors concluded that women’s “ambient belonging”, or sense of fit with the people and things around them, was threatened in the stereotypical room. This study suggests that even subtle environmental cues (e.g., a poster) can make people question whether they belong in a certain domain or field of study.

Feelings of belonging and acceptance have implications not just during our awkward teen years, but also in adulthood, in ways as profound as shaping college trajectories and influencing career decisions. These outcomes are especially important for fostering diversity and even social mobility. Research studies, such as those described above, hold promise for making school and work environments more inclusive.

Can you believe a 1-hour intervention can have that dramatic of an effect? Have you had situations where you didn’t feel like you belonged? What did you do to change that?

Trusting your fellow scientist Previous
What does a scientist look like? Next