Is graduate school a Ponzi scheme?

This week’s edition of Psych Wednesdays was written by Michael Kraus and was originally posted on Psych Your Mind on January 16, 2012.

A couple of years ago, this article ran in the Economist. In the article, the author takes the point of view that the pursuit of a PhD degree is a waste of time. Whether or not you agree with this perspective, it is important to consider the points being made. If you are, or have been, a graduate student, you probably learned much of this during your time in graduate school.

1. Imbalance of supply and demand
The article gives some very compelling statistics indicating that there are simply not enough jobs to employ all the PhD students trained annually in professions (as academic professors) for which they were trained. The article suggests that more than 100,000 new PhDs were conferred between 2005 and 2009. There simply aren’t that many academic jobs.

2. Limited earning potential
Good news: your PhD degree will earn you about 26% more than your bachelor’s degree. Now the bad news: a Master’s degree, which takes considerably less time will earn you about 23% more than a bachelor’s will. The numbers here are simple: if the outcomes you are primarily concerned with are financial, the PhD doesn’t seem to make sense (or cents) for people.

3. A source of cheap labor
The article points out one of the more depressing aspects of the PhD degree: Graduate school is a source of extremely cheap labor for the university. Graduate students perform much of the labor in the experiments and also tend to teach many of the courses offered by the university. This is a problem because there are incentives, very unfortunately, to admit more graduate students and confer more PhDs despite the limited earning potential and imbalance of supply and demand.

Again, I highly recommend reading this article, especially since most of the people who we seek advice from about graduate school tend to err on the positive side of things. In terms of the article, that graduate students are a source of cheap laborbecomes apparent in the first semesters of graduate school. I must have taught smallish sections of undergraduates for 10 semesters during my graduate years (e.g., grading exams, serving as a liason between students and professors). Graduate students do this work to cover tuition costs and for a small stipend. I could have used a little extra money during graduate school.

And unfortunately, your earning potential doesn’t improve a whole lot after that. When I start my new professor job at the University of Illinois in June, it’s not going to make me a part of the 1%. If money is your primary concern, there are plenty of jobs you could do where you don’t have to work for peanuts for the first 6 years.

Let’s not forget, I’m one of the lucky ones, fortunate to land an academic job despite the imbalance of supply and demand caused by the huge number of PhDs conferred yearly. Others will have very different career paths, and will land jobs in other fields, for which they don’t have explicit training.

So, much of what is written in the economist article is true about graduate school. And I think it is important to consider these problems with the PhD conferral system. For one, academic institutions might want to consider shrinking the number of graduate students they admit annually. I also think this article sheds light on the importance of labor unions for graduate students. These unions can protect the work rights of graduate students whose work can be taken advantage of by the university. The article also highlights the importance of finding a great graduate mentor–a professor who will look out for your career and your best interests. Unfortunately there are a lot of individual differences in mentoring ability (Cronan-Hillix et al., 1986).

On the other hand, I think that the rewards of an academic life are not likely to be financial. Rather, the rewards lie in the intellectual pursuits of academic work and the challenges that occur during the time that one is a graduate student. These intellectual pursuits are a privilege that graduate students enjoy, and perhaps no other occupation has them. Sure they are combined with long hours and little pay, but I think many students sacrifice these things for the possibility that they will discover something new, and forever add to scientific knowledge.

I also believe that earning a PhD and working in an unrelated profession doesn’t have to be seen as a failure. There are many jobs out there in the Bay Area alone that require statistical training, or professional web design experience, or survey/interview experience. These jobs are perfect for someone with the rigorous experience a PhD requires. Sure they probably don’t earn the type of salary earned by a corporate CEO, but they represent an employable path for PhD students who are finished with academic life and ready for the professional world. Graduate students should entertain the idea that they are entrepreneurs as well as researchers. It’s not always a sad story for graduate students, and I think the Economist article missed that a bit. 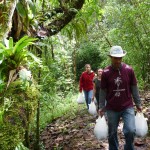