Piecing together the past at IceCube

I’d like all of you to try something before reading this article: go outside (or, if you live in the Bay Area, you may have to settle for your fridge), and take a look a a piece of ice. Doesn’t seem to be much going on there, huh? Well, what if I told you that you could measure energy that originated from the creation of the universe using that piece of ice? Setting aside my possible insanity as an answer, you’d probably want a good explanation. Well, without further ado, allow me to explain…

How to see the history of the universe with a piece of ice:

Step 1: raise $271 million in venture capital.
Step 2: build a giant lepton detector in the south pole.
Step 3: record the energy released by sub-atomic collisions originating from the creation of the universe

See how easy that was?

Even if you’re unable to carry out this little experiment by yourself, it turns out you’re in luck because someone else is already trying it. I’m referring to the IceCube Neutrino Observatory, located in Antarctica.  It’s run by researchers at the University of Wisconsin – Madison and aims to tell us something about the distant (and I mean distant) past by measuring the energy emitted in ice deep within the south pole.

While light is faster than anything else in a vacuum, it often slows down significantly in some other medium (for instance, it travels about 75% as fast in water).   In such media, it is possible for particles to be accelerated faster than the surrounding light (for those of you with a particle accelerator laying around, give it a try!). When this happens, a phenomenon occurs that can be likened to a boat traveling through water.  As the particle moves through the medium, it causes nearby atoms to emit light waves that “bunch up” in front of the particle.  The compacted light is then projected diagonally outwards as the particle continues moving, just like the wake of a speedboat.

This phenomenon is called “Cherenkov radiation”, and you can see it almost any time a subatomic collision causes particles to burst apart at speeds faster than the speed of light. For example, these collisions occur frequently in nuclear reactors, causing them to emit a beautiful blue glow.

Another common source of faster-than-light particles is cosmic neutrinos that smash into water molecules embedded in ice when the reach the Earth.  This is where IceCube comes in.  Using a “neutrino telescope” — an array of spherical optical sensors — scientists located on the Antarctic ice cap are able to record information about Cherenkov radiation emitted during these collisions.

Here’s how the process works:  some cosmic event causes a neutrino to go hurtling through space (they are extremely tiny and relatively inert, so they can go a looong ways before hitting anything).  This neutrino makes its way to Earth, where it happens to collide with a frozen water molecule deep within the ice at the south pole.  This collision causes an explosion of high-energy particles, which move so fast through the ice that they emit Cherenkov radiation.  The radiation is recorded by IceCube’s detectors, and then analyzed to answer questions about the neutrino’s source.

The process is far from perfect. As you might imagine, documenting the travels of a particle that literally crosses the universe to get here is an extremely delicate process.  Moreover, Cherenkov radiation can be generated by many other cosmic processes that don’t have anything to do with neutrinos (for instance, from solar storms).  However, the pristine, untouched ice of the south pole gives us the best possible environment to record this activity.

Recording this information is useful for many purposes, but perhaps most interesting of all is that it might tell us something about what kind of event spawned the galaxy that we live in.  Millions of millions of years ago, the cataclysmic events of the early universe sent neutrinos hurtling across the galaxy.  Using information extracted from the neutrinos captured at IceCube, we may be able to infer exactly when and where these massive cosmic events occurred.

So the next time you go outside and complain about how icy it is, think about how many glimpses into the nature of life it might hold…if only you had a neutrino telescope. 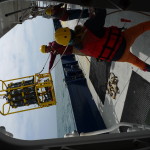 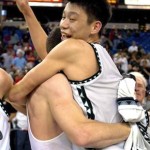