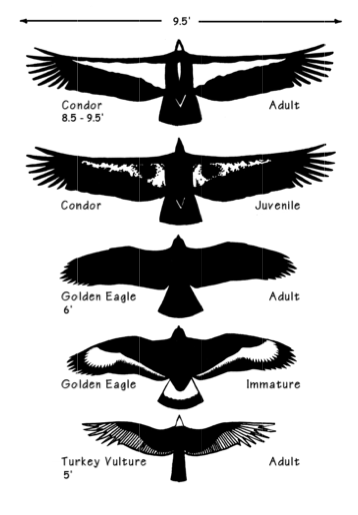 The first give away of a California condor is its sheer size. Weighing in at a whopping 25+ lbs, the California condor commands the skies with a wing span of nearly 10 feet from tip to tip, the largest of any bird in North America. (Note that in terms of mass and/or body length, the condor is surpassed by the Trumpeter Swan, American White Pelican, and Whooping Crane). Condors have even been mistaken for small planes! Turkey vultures have only one fifth the mass and half the wing span of California condors, but size is not always easy to determine high up in the sky. Other features that discern between these two species are flight patterns and ventral profile. The California condor has a flat flight position and is very stable, compared to the slight “V” and more wobbly flight of a turkey vulture. The ventral color patterns seen from below are shown in this picture from the National Park Service. California condors also have colored identification tags that help scientists identify individual birds.

Turkey vultures (Cathartes aura) and California condors (Gymnogyps californianus) are both members of the family Cathartidae, i.e., New World vultures. New World vultures belong to the order Incertae sedis, Latin for “we still don’t know where to put these guys.” New World vultures went from being classified under Falconiformes (raptors), to Ciconiiformes (storks, herons, and the like), back to Falconiformes, and are now classified in their own order, Cathartiformes, by the South American Classification Committee.

Turkey vultures stop for a snack

The similarities between the New World vultures that we are familiar with and Old World vultures are not due to direct relatedness, but to convergent evolution, i.e. morphological similarity swayed by similar environmental pressures. The most striking feature of these birds—a pale-to-red naked head—evolved in both families as a necessity for hygiene. These scavenging birds spend their meals neck-deep in dead animal, and a head covered in feathers would quickly become plastered in rotting meat and festering bacteria (“Excuse me, sir, you have some carrion stuck in your beard”). Instead, a naked head is kept sanitized by dehydration and ultraviolet light at high altitudes. Interestingly, just as a person can express emotional state through blushing, so too can a California condor communicate through a flushing neck. And just for the record, a vulture is NOT a buzzard, which technically refers to the Buteo genus, i.e. hawks.

Interested in trying to spot a California condor in the wild? Well you’re in luck; there are three release sites in California, two of which are relatively close to Berkeley: Big Sur, Pinnacles National Monument, and Bitter Creek National Wildlife Refuge. According to the Arizona Game and Fish Department, there are 369 condors as of March 2011: 178 in captivity, 20 in Baja, 97 in California, and 74 in Arizona. 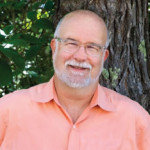