Radiolab and the philosophical origins of scientific inquiry I love Radiolab. I’ve listened to pretty much every episode of this innovative science radio show, so I was thrilled to attend Radiolab: Live In the Dark at Zellerbach Hall last Friday. The live version of the radio show was put on as part of the 2011 Bay Area Science Festival (you can read more of BSR’s coverage of the festival here).

The funny thing about Radiolab is that many of its listeners don’t realize they’re being treated to rich science radio programing. In a way, they aren’t; the show doesn’t follow the usual script of explaining recent research breakthroughs in simplified terms, and the live act was true to the show’s unconventional style. Two of the three segments, a discussion of the experience of blindness and a few stories from an astronaut, were only tangentially connected to specific scientific discoveries. The third, an explanation of the eyeball’s evolution, was closer to standard popular science fare, but shared with the other two segments a profundity that surpasses the glorified press releases that often pass for popular science.

I thought the third segment, hosted by Jad Abumrad and Robert Krulwich, was particularly fascinating — as well as visually sumptuous in a live setting — simply because, well, I’m a big science dweeb. But my friends — historians, artists, librarians, and waiters who previously knew very little about the science of the eye — loved the segment for very different reasons. For them, the intrigue came from the way that Jad and Robert connected a series of scientific discoveries back to a fundamental idea: the validity of evolution itself. Their experience reminded me that science makes important contributions to greater understanding of “existence, knowledge, values, reason, mind, and language.” As a graduate student, it is easy to lose sight of the big picture, but Radiolab made the connection obvious again.

Before the performance, some friends and I were discussing a recent New York Times article about attrition within science majors. One thesis of the article was that students are drawn away from the sciences by majors that allow students to explore ‘big ideas.’ After experiencing Radiolab: Live, I can safely say that understanding the nuts and bolts of science doesn’t need to exclude a connection to something greater. Many of my favorite professors in college were the ones who integrated philosophy or history into their curricula. Perhaps Radiolab can serve the same purpose for future science majors 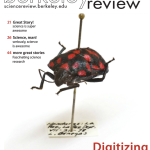 BSR Issue 21: Letter from the editor Previous
We are the 99% of scientists Next 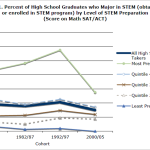