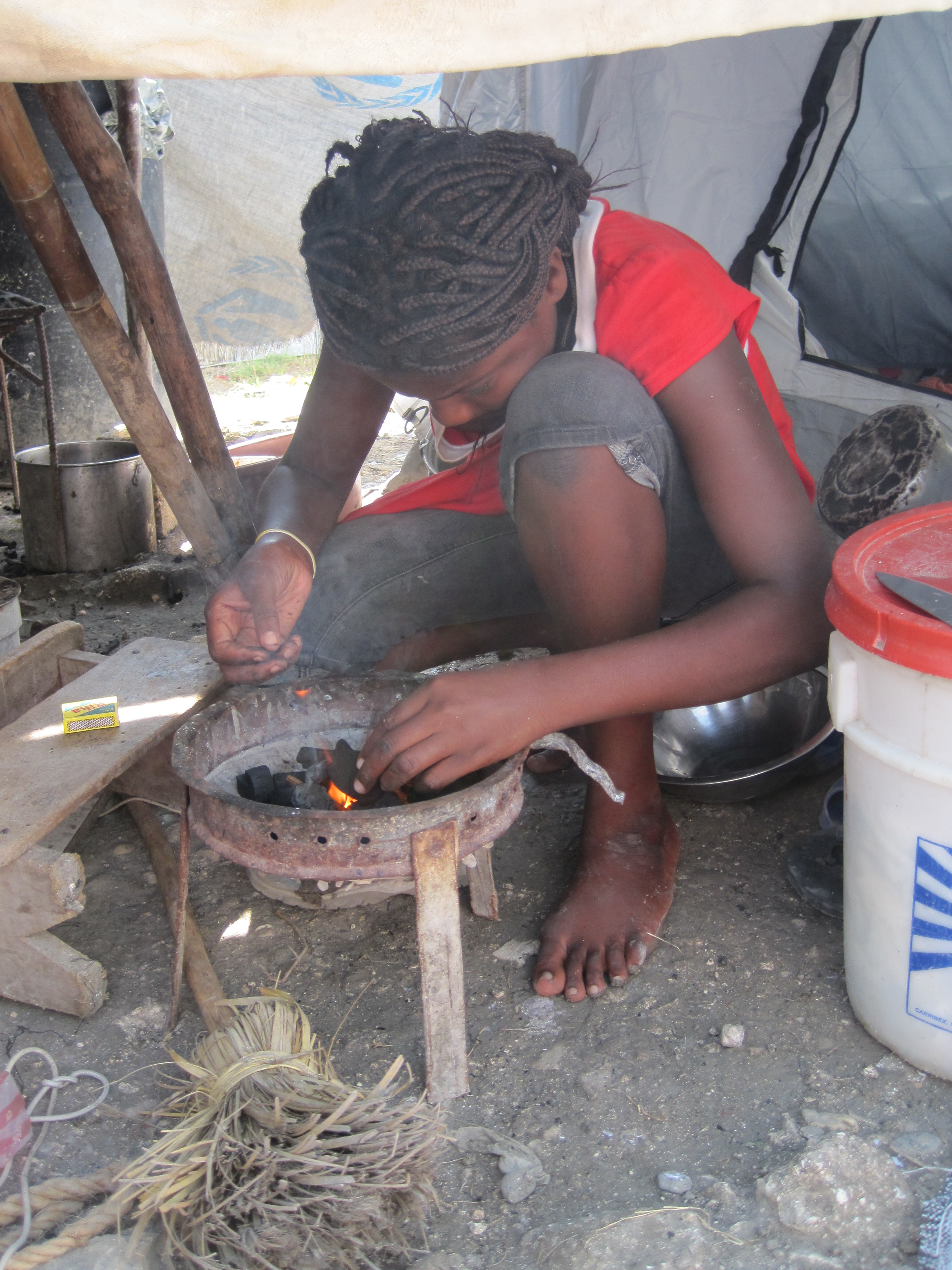 Gadgil originally became involved with cook stove engineering in 2005, with the goal of assisting war-displaced refugees in Darfur, Sudan. That project culminated in the Berkeley-Darfur Stove, a wood-burning stove with more than 15,000 units deployed to Darfur families by the end of 2010 alone. Later, a modified version of the Berkeley-Darfur Stove was designed for cooking use by families in Ethiopia, where wood is also used as the solid fuel source. As a result of these two projects, when the earthquake hit Haiti, the Berkeley team was uniquely qualified to assist with cook stove issues in the refugee camps.

Katee Lask poses in her lab at LBNL with a cook stove. Often, square cook stoves are used with round cooking pots, leading to inefficient heat transfer

As Katee walked me through the group’s experimental research space in Building 60, she identified a variety of critical engineering issues associated with cook stoves. Many cook stoves, she pointed out, have never been optimized for efficiency. Instead, their primary advantage is ease of fabrication. To illustrate her point, Katee selected a square metal cook stove from the “research equipment” shelf–and a round cooking pot. The round pot fits easily into the square cook stove with room to spare. As a result, not all of the burning fuel directly heats the cooking pot. In more scientific terms, Katee called the issue “inefficient heat transfer.” In a second example, Katee demonstrated a cook stove in which the cooking pot is placed directly on the burning coals. Ideally, there should be a 0.5 cm gap between the coals and the bottom of the pot, to allow sufficient oxygen flow for maintaining combustion. Without the gap, the coals burn cooler and incomplete combustion occurs, leading to the production of toxic carbon monoxide gas.

For her own master’s work, Katee has focused on solving a third cook stove design problem: ignition inefficiencies in charcoal-based cook stoves. Lighting a typical charcoal cook stove takes up to eight minutes, as the flow of cool air over the charcoal counteracts the user’s attempts to ignite it. During that time, a significant amount of soot is released into the air and fuel is wasted. In response, Katee has developed the “lighting cone,” a conical device made of steel sheet metal that is placed directly over the igniting coals with the small end up. The device increases the upward draft of air over the charcoal, while decreasing the downward draft of cool air. A small opening at the top of the cone allows for smoke and heat to vent. In timed trials with Haitian refugees, the total time to charcoal ignition was decreased from 6-8 minutes to just 4-6 minutes. This decrease in lighting time, Katee explained, was enough to justify moving forward with the project.

Katee also discovered a rather unexpected benefit of the lighting cone while testing it in Haiti. Several families figured out that they could direct the sooty ignition-phase smoke away from their homes using the cone as a funnel. The reduction in indoor pollution could mean significantly improved health for Haitian families. Of equal importance, the ability to steer soot may encourage families to actually purchase and use a lighting cone if the product were affordable, despite its odd appearance. As a result, the lighting cone is not expected to encounter a common pitfall of products engineered for third-world users: under-utilization and/or misuse.

Katee’s in-person visit to the refugee camps, where she worked with families in their homes, has been crucial for the success of her project. This is a side of engineering that students usually do not get a chance to see. Field testing products can be time-consuming and dirty, neither of which fits well into a classroom setting. Yet, it is also the most crucial phase of a project, in terms of predicting future success. With Katee’s field work returning strong positive results, she is now working hard to optimize the system and finish the lighting cone project.

For Katee, wrapping up this project will allow her to earn a master’s degree in engineering. For Gadgil and the other engineers working on cook stove engineering, it will mean continued progress toward their vision to help those in need. Lastly, and most importantly, for the refugee families of Haiti, it will mean cleaner living conditions, healthier air to breathe, and less income spent on charcoal. Not bad for a master’s project built around a small square stove, a round pot, and a piece of sheet metal. Not bad at all.