Science in Sacramento: A ban on BPA for babies 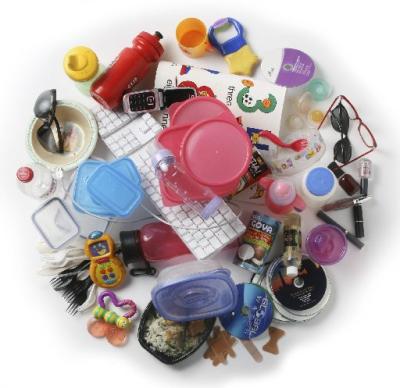 This post is part of a series called “Science in Sacramento”, which examines how science effects California state policy and vice-versa.

BPA is found in many plastic comsumer products

You don’t have to live in Berkeley for very long to know that BPA is decidedly uncool around here.  BPA – short for Bisphenol A, a hardening agent in plastics – is part of the reason metal or glass water bottles long ago replaced plastic as the hip hydration accessory for many Berkeleyans. Now, the California State Assembly – perhaps a little slow to get with the program – has introduced a bill which would ban BPA from all baby products.

Why, you may ask, does BPA have such a bad rap? Besides its role as a hardening agent in plastics, BPA mimics estrogen, the hormone responsible for female sex characteristics and metabolism control. This is bad news bears for little babies and older folks alike. In rodents, exposure to BPA has been shown to cause problematic symptoms such as obesity and mammary gland development. Most humans display a constant low level of BPA in their bodies, and while experts disagree about how dangerous such an amount of BPA might be for adults, scientists are increasingly agreeing that BPA is bad for infants. Because many baby bottles contain BPA, levels of BPA in infants’ bodies can spike with each feeding; some data shows that BPA is correlated to obesity, diabetes, and ADHD later in life.

Europe has already taken steps towards banning BPA in baby products, and it looks like California may be next. On August 30, 2011, AB 1319 (The Toxin-Free Infants and Toddlers Act) passed the CA state Senate and will go to the State Assembly later in this legislative session. Last year, the same bill passed in the Assembly but not in the Senate and has been presented to the CA legislative bodies in previous years.

Some think that this ban is premature based on the scientific data available. Others believe that a ban is the only way to allow less affluent individuals to avoid BPA, as most inexpensive baby products contain the chemical. The FDA has been inconsistent on the issue, but its latest statement indicates that even though it does not have enough evidence yet to ban BPA, the issue deserves more research – a view that is shared by some Californians.

As a chemist, this blogger agrees that this issue could easily be hijacked by politicians hoping to boost their “green credentials” or lobbyists trying to maintain their employer’s profitability. While I try to avoid BPA in products I use often, I’m not above reaching for a plastic water bottle occasionally. I’ve seen no research that suggests I should behave otherwise. Given the special concerns around infants, however, I do believe that this limited ban may be justified.

Backyard science at Cal: see a supernova tonight Previous
The sleep cycle: what's really going on while you're... Next