This week’s edition of Psych Wednesdays was written by Anna Luerrsen and originally published on Psych Your Mind on August 31, 2011.

While positive self-views are generally considered healthy, adaptive, and attractive, OVERLY positive self-views often have social costs. For example, when I asked my friend’s boyfriend if his classes this semester were challenging, he responded as follows: “I’ve done better than EVERY OTHER student in EVERY SINGLE grad class that I’ve taken. I certainly don’t except my classes this semester to be a problem.” If you’re like me, this statement made you shudder. The sense of superiority and the overt “bragginess” screams creep. Again, if you’re like me, you aren’t surprised that I was less interested in a friendship with him the second he uttered the statement, and that when this statement was followed by similar statements later on, my friend quickly ended the relationship. Although I’m certainly not qualified to diagnose my friend’s boyfriend with any disorder, or to label him as a particular type of person, this attitude of superiority is consistent with narcissism, colloquially defined as an inflated sense of self-importance, egotism, vanity, and selfishness.

As this example demonstrates, there is often a large disconnect between narcissists’ self-perceptions (e.g. how positively he sees himself) and others’ perceptions of him (how positively his friends, coworkers, classmates, and acquaintances sees him). Interestingly, narcissists often create positive first impressions – they are initially rated as charming, likable, extroverted, and physically attractive (e.g. Back, Egloff, & Schmukle, 2010). However, over time these impressions sour, with others progressively seeing them as disagreeable, emotionally unstable, and poorly adjusted (like my example above). Despite the deterioration of their reputation, narcissists often continue to see themselves in overly positive ways. This begs the question – are narcissists self aware? More precisely: do narcissists know that others don’t see them in such a positive light? Are they aware of their own negative characteristics? DO THEY KNOW THEY’RE NARCISSISTS?

These questions were formally examined by Erika Carlson and colleagues (2011) at  Washington University in St. Louis. Carlson formally contrasted two different perspectives on narcissism. The Narcissistic Ignorance View argues that narcissists lack insight about their own personality and aren’t aware how others see them. This is the dominant view of narcissism. Alternatively, the Narcissistic Awareness View argues that narcissists do have insight about their own personality and are aware that others see them less positively than they see themselves. Using this basic design, Carlson in fact found support for the Narcissistic Awareness View across all three studies. Here are the results:

Consistent with prior studies:

Given that the Narcissistic Ignorance View (which again holds that narcissists lack self-awareness) was the prevailing view of narcissism, these results are pretty extraordinary. Even more extraordinary when you consider the fact that although narcissists know that others don’t think they’re so great, they maintain their overly positive self-views anyway. How exactly do narcissists maintain such positive self-views despite others’ dislike of them? Carlson proposed a few interesting ideas. First, narcissists might believe others are just too stupid to see how amazing they truly are, or they may believe others’ negative views are simply the result of jealousy. It might also be the case that narcissists, aware of their deteriorating reputation, cut off long-term friendships and instead, maintain a flow of new acquaintances that see them as the charming and likable person they believe they are. The process by which narcissists retain their positive self-views remains an interesting and important question future work should address. Nonetheless, Carlson’s results are an important, and to me, quite interesting contribution. Have other ideas about how narcissists maintain such positive self-view? Share them in the comments section! 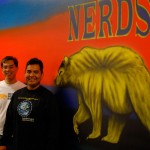 The Mathematical Duo: Steve Chin and Hugo Ramirez of... Previous
Telluride's Town Talks: A model for scientific discourse Next