Geologic carbon sequestration, life-cycle assessment, and what to do with not-quite-perfect solutions

It is easy to be skeptical of initiatives aimed at reducing carbon dioxide emissions. Biofuels seem great until you factor in all the land and water they require; wind turbines are clean, but they pose a threat to birds; electric cars are often charged by coal-generated electricity; recycling can be helpful, but… well, you get the point.

Given how easy it is to play the role of a skeptic, I find it important to balance my views with a healthy dose of optimism. After all, in face of the daunting challenge of meeting our long-term energy needs while reducing carbon dioxide emissions, I am a firm believer that no action is too small and that even modest efforts are worthwhile.

One strategy recently placed on my radar is geological carbon sequestration (GCS), in which carbon dioxide emissions are injected into geological structures deep within the earth. GCS came to my attention when I attended a talk by research scientist Thomas McKone of Lawrence Berkeley National Lab. In his talk, McKone discussed his outlook for GCS, specifically GCS in brine-filled aquifers found in sedimentary basins. (His talk was part of Carbon Cycle 2.0, a series of lectures by LBNL researchers working toward a carbon-neutral energy future.)

Here is the logic behind GCS in a nutshell: power plants produce tons of carbon dioxide that we do not want released into our atmosphere, so we bury it in a briny aquifer.  Bye bye, carbon!  Of course, nothing is ever that simple, and that’s where McKone steps in.  The problem is that pumping all that gas into the earth causes an increase in hydrostatic pressure, which has the potential to increase seismic activity in the area. The easy solution is to remove brine from of the earth at the same rate that we pump carbon dioxide in, but then what do we do with all that brine?  One idea is to dump it into a nearby river, but McKone quickly admitted that was probably not a great option.  Alternatively, we could construct ponds with saline-tolerant plants.  Perhaps we could even create ponds to grow algae biofuels.

The simplest and most scalable solution, though, is to dump the brine into the already-salty ocean.  But that’s where my skepticism starts to seep in. Is it really economically and environmentally feasible to pump vast quantities of brine out of the earth, dilute it with fresh water and transport it to the ocean?  Is it really safe to store carbon dioxide at high pressure in the underground caverns left behind?

McKone addressed my skepticism, however, and I liked his answer: no solution is perfect, yet too often we demand a solution that is better than our preexisting systems in every single way. When we find no perfect solution, we revert to no action at all.

Choosing not to give in to the forces of inaction, McKone is currently carrying out a detailed study to find out if GCS in brine-filled aquifers is a viable technology. He is using a methodology called life-cycle assessment (LCA), which rigorously accounts for environmental impacts at all stages of a technology’s life-cycle. In the case of GCS, this means, among other things, factoring in the energy required to pump, transport, and process the brine for ocean dumping.

McKone is still awaiting conclusive results from his analysis. If he finds the overall environmental impact of GCS is positive, then I hope someone tries it out, even if one or several aspects of the process are less than ideal.  Because if we keep waiting for a perfect solution to solve all of our energy needs and carbon management at once, we may be waiting a long, long time – and by then, it may be too late. 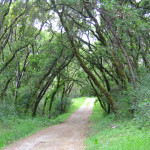 Cal scientist keeps tabs on forest health: On trail with... Previous
Reflection without rumination: How to learn from a negative... Next