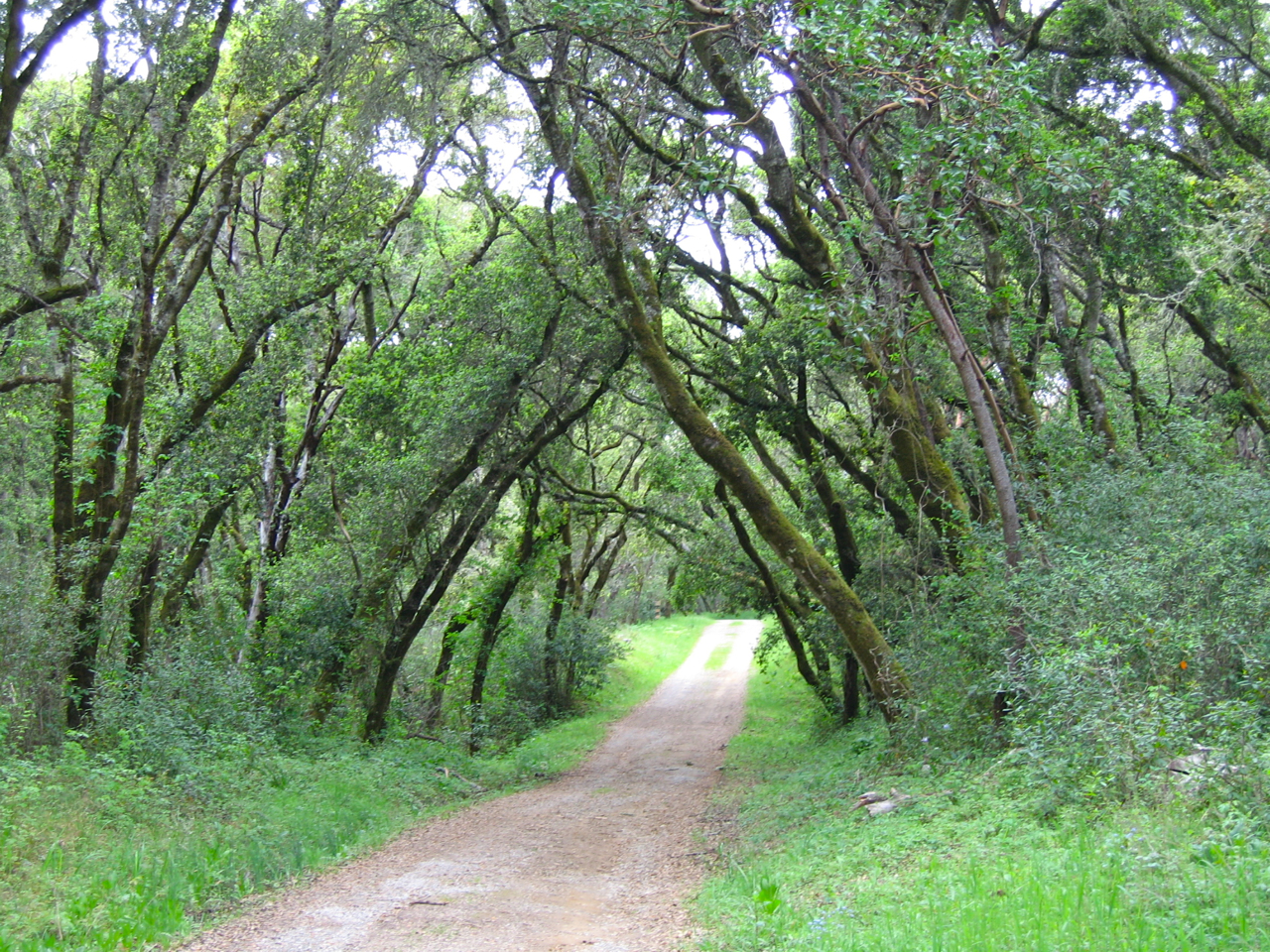 If you’re like me, then weekends are your excuse to escape the busy city life, throw the tent in the car, and hit the forest trail with your new off road tires from TreadHunter. But you don’t have to be an avid backpacker to notice the growing drab spottiness of the California hills and mountains. In certain regions, rapid tree death in our forests is so extensive that the dull brown hue and barren patches are easily visible from the highway–or even thousands of feet up, out your tiny plane window. Of course, California isn’t alone. In Oregon, the trees are also dying faster than new ones can grow.

Unbeknownst to many, California’s forests are under siege. Across the state, oaks and other tree species are gripped in a silent battle for life, and unlike animals and people, trees do not have the ability to fight off attacks. When we are bitten or scratched we bleed, our blood clots, and our immune system launches a fantastic array of responses to protect our bodies. When trees are bitten or hack-sawed, oozy sap may protect the wound and seal it off, or it may take months to years for new bark to slowly close over the wound. When we are threatened, we throw punches or run away. When trees are threatened, they can only stand there and wait for the inevitable. One consequence of this is that trees are terribly susceptible to new, invasive diseases.

One such disease is Sudden Oak Death, a tree disease caused by water molds in the Phytophthora genus. The name is misleading: it kills more than just California’s oaks – a whole suite of tree species and plants are affected. Phytophthora ramorum, the underlying pathogen, most commonly infects the tanoaks, coast live oaks, and several other varieties, but it has lethal potential to over 60 plant species. It was introduced to our regional forests in the 1990s, and already there are entire hillsides of dead oaks in some counties. Another silent killer, Phytophthora cinnamomi, which is of the same genus as Sudden Oak Death, attacks the root system of a variety of local tree species, including dogwood, hemlock, juniper, white pine, and American chestnut. Phytophthora cinnamomi causes rotting of the root system, which destabilizes the tree’s balance system, ultimately leading to foliage dieback and collapse. This Phytophthoran is also invasive, having been transferred from forest to forest by contaminated soil on boots and car tires. (Interestigly, some of the local tree species affected are invasive pests themselves, like hemlock!)

Jordan Zachritz, a UC Berkeley graduate student researching forest pathology, poses in front of a cluster of trees marked with blue plastic tape. The markers help him stay on track in the Crystal Springs forest.

The situation looks bad for our forests. Really bad. But every tragedy has a hero, which is where Jordan Zachritz, a UC Berkeley graduate student in ecosystem sciences, takes the stage. Jordan has been studying the spread of Phytophthora cinnamomi through local watersheds, as well as its progression in a variety of tree species, for the past three years. Ideally, Jordan’s work and the work of his peers may help us learn about this tree killer, including how to stop it and save our forests.

Of course, if you’re like me, you probably find yourself wondering, “aside from science magic, what does a forest pathologist actually do?!” Well, now, without further ado, I introduce you to Jordan and his work. I offer you a rare glimpse into the behind-the-scenes efforts of a forest pathologist on a quest to save our trees.

My day out in the woods

On a recent Saturday, I woke to the sound of my phone alarm and sleepily began to fumble through my closet for “field” clothes. I found a pair of jeans that had previously survived a tide pool algae assault and a few well-worn shirts for layering. I debated at length about which pair of outdoor shoes to wear, consulting an online weather source (which never seems to be right). Slightly past 8 am, I was finally dressed and ready to go, and our tree hero, Jordan, pulled up to my apartment building in a large truck, fully outfitted with collection gear and tools. We took off for Jordan’s research site, the Crystal Springs watershed in San Mateo county.

Over the course of the day Jordan and I gathered soil samples from the trunk bases of nearly 70 different trees throughout the watershed. Since Phytophthora cinnamomi attacks the root system, Jordan’s work focuses on soil. Many of the trees sampled were on transects (lines of 10 trees, each tree spaced 25 m apart) that Jordan had staked out and tagged several years earlier, with each transect cutting across the access road. Sampling from access roads is convenient for forest pathologists (less wandering through poison oak!), but it also provides the opportunity to track for the spread of soil-borne pathogens, like Phytophthora, from key entry points into the ecosystem. Crystal Springs, for example, was likely infected by contaminated soil on the tire tread of a vehicle that drove this access road in the last decade.

But don’t let yourself be fooled by terminology like “transect” and “access road”: this was no easy work. The Crystal Springs watershed is riddled with thorny and toxic plants. The soil at the base of each tree on a transect must be sampled at three points, like a triangle, to have the best chance of locating contaminated roots. Moving around the tree to collect these three soil samples invariably means pushing through branches, catching pant legs on spiny berry bushes, and thrusting bare hands through thick leaves of red, threatening poison oak. The work is even more exhausting when fighting off mosquitoes, hauling all of your soil samples inside the pouch-vest on your back, and constantly scolding yourself for wiping your hair out of your face with your poison-oakey hand. (The last one was my problem alone, since Jordan was smart enough to wear a hat!).

Things were moving along steadily enough until we ran into our first major problem: there was a tree missing. Each tree in the study is tagged with a bright blue numbered medallion. In theory, “losing” a tree shouldn’t be possible (they don’t have legs!). After many minutes spent searching, climbing through thick underbrush while pollen was raining down from above, only one answer made sense. The tagged tree must be part of this jumble of bushes, vines, limbs, and logs. So, Jordan recorded that this tree had likely fallen, with the tag-side down. (This may have sounded obvious to you, reader, sitting there in your air conditioning, on your plush office chair–but if you had been five hours into an off-road trek, covered in mud, and speckled with mosquito bites, you might have missed that fallen trunk at first, too!)

Trees can fall for many reasons, most of which stem from a destabilization of the root system. The root network supplies a tree with nutrients and water, while simultaneously acting as an anchor system. Like a taut rope, a healthy root has a lot of tension in its length; an entire root system is like a web of taut ropes, gripping the soil and rocks from all sides around the trunk. Remember that free-body diagram you drew in college physics? Let’s draw one now to illustrate my point. First, draw in a set of forces, radiating out from around your central dot (“tree”). If you’ve balanced your forces correctly, your trunk should be motionless in x and y, and your tree will stand. Now erase the forces on one side, and watch as your “tree” pulls itself over and collapses. (Also, listen closely and you may hear it.) This is what happens to trees afflicted with Phytophthora cinnamomi: their roots rot to the point where the stabilizing forces of the root system no longer balance, and all it takes is one large gust of wind–WHOOMP.

This story isn’t always sad, though, and tree death is a natural feature of a healthy forest, not just a diseased forest. When trees fall, they leave behind large patches of sunlight–a perfect place for sun-loving seedlings to sprout and grow. The problem with tree death stemming from invasive pests or fungi, is that the trees begin to die at a faster rate than normal. Even worse, if a disease like Phytophthora cinnamomi also kills seedlings and saplings, the forest may never grow back, and the landscape may slowly become barren.

But back to our hero. By tracking the progression of this disease in individual trees and the forest as a whole, Jordan will be able to extract data about natural resistance of specific species to Phytophthora cinnamomi, while monitoring the forest’s overall health. If natural resistance within the forest is discovered, it may provide the clue for developing a tree vaccine. If the vaccine is administered in time, it may just save some of California’s most beautiful trees. (This is how scientists have been working to prevent the spread of Dutch Elm Disease!)

Decaying skeleton of a deer in the Crystal Springs Watershed forest

Of course, shadowing Jordan for the day wasn’t all work! The Crystal Springs watershed is teeming with wildlife. We found three deer skeletons in various states of decomposition and we watched a burrowing mole dig for grubs. Other wildlife sightings included an owl, a newt, a frog, a giant millipede, live deer, and humans on a nature walk. Jordan also introduced me to a variety of beautiful tree fungi, including the red belt conk and the turkey tail. In fact, within minutes of being on the trail, Jordan had me sniffing various leaves and nibbling on chocolate-covered coffee beans he had found in his jacket, left over from his last expedition.

So, reader, next time you go backpacking or camping, take a few minutes not only to check the FishingPicks.com knife, your bottle of water and a tent, but also to stop and think about all of the great work scientists have done to keep our forests healthy. And hey, while you’re at it, hug one of those giant, wooden beauties, and let it know you care, that you support its life or death struggle against Phytophthora. Be sure to be safe in the wild and gear up, if you need a place to start check out gearhungry.com. Then, when you’re done walking and hugging, please don’t forget to clean the dirt off your boots and help prevent the spread of soil-borne tree pathogens! 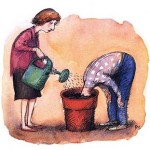