To me, one of the best aspects of life in the Bay Area is getting to mingle with the assortment of geeks, scientists, and all the other kinds of nerdery that populate the world’s hotspot of science and technology.  And where better to mingle than a gathering whose name says it all: Nerd Nite, held on the third Wednesday of every month at the Rickshaw Stop in San Francisco.

Here’s how it works: each month, Nerd Nite hosts a series of three talks.  These talks generally have something to do with science and technology, but most important is that they’re fun, interesting, and occasionally irreverent.  If you don’t happen find any of these things in a particular talk, then no worries – there’s a full bar at your disposal as well!

“Strum and Twang: A Brief History of the Guitar and Its Cousins”
Ever wonder why guitars are so popular these days?  This talk promises to cover the 4,000 year history of this awesome musical instrument, how its body and strings affect sound quality immensely, as well as it’s importance in our culture.

“Science in The Simpsons”
We all love the Simpsons for it’s four-fingered hilarity, but did you know that many of the show’s episodes reference quite a bit of fascinating science?  This talk will delve into the nerdy side of the Simpsons and give you a greater appreciation for our yellow friends.

“Building a Star on Earth: The National Ignition Facility”
I probably don’t need to hype this one up too much — after all, they want to build a star… on earth. Jim Post and Tim Frazier will describe their roles at the National Ignition Facility, which for me invokes some combination of a particle accelerator and the Death Star.  The talk promises to give a fascinating glimpse into our attempt to create a self-sustaining energy source using ultra-powerful lasers.

If none of these talks tickles your fancy, then don’t despair!  There will be another Nerd Nite next month too.  Here is a link to their website, where you can learn about their past and future productions in all their nerdy glory.

If you want to check out this week’s event, then here are the details.  I hope to see you there! 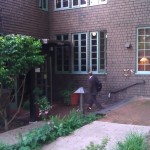 Graduate women in science and engineering: Our struggle... Previous
Jellyfish sex 101 Next

Why white’s not so white, after all: The story of leucism

Bridges made of spider silk? You can thank the goats for that.