How I learned to stop worrying and love WikiLeaks

What do diplomacy, nuclear fusion, and quantum teleportation have in common? Read on for the answer, or if you’re too impatient, go straight to the source: WikiLeaks cable 10BEIJING263.

In case you were living under a rock for the second half of 2010, let’s briefly review the facts of the WikiLeaks scandal. WikiLeaks is an organization whose stated goal is to “publish material of ethical, political and historical significance while keeping the identity of our sources anonymous.” Since 2006, they have been publishing previously secret information on their website, helping whistle-blowers either outrage or embarrass various military and political figures. In late November of last year, the group began releasing a slew of classified diplomatic cables sent by US State Department representatives since 1966.

Despite massive amounts of media attention given to WikiLeaks and its spokesperson Julian Assange, I found myself wondering why this release of information upset so many people. In an effort to find some personal connection to the scandal, or at least to share in the sense of mystery and espionage surrounding the cables, I did a quick search for one word: “science”. I’d like to share with you the most interesting result of that search, which was a cable sent on February 2, 2010 from the US embassy in Beijing, China.

So a research lab in China got something really hot for a few minutes… why was this such a big secret? It turns out that this cable was actually ranked fairly low in terms of security. It was labeled “Confidential”, meaning that its release “could be expected to cause damage to the national security.” The two higher levels of security are “Secret” and “Top Secret”: information which would cause “serious damage” and “exceptionally grave damage”, respectively.

My guess is that diplomats are allowed to tour foreign government research facilities, with the understanding that the things they see will not be spread to the media or the greater scientific community. So the IPP’s fusion results are not necessarily dangerous secrets, but they are scientifically interesting. We’ve covered recently the workings of a nuclear fission reactor, where large atoms are split apart to release energy. For lighter elements like hydrogen, two atoms can actually be fused to release energy. This energy can be extremely beneficial (see: sunlight) or extremely harmful (see: thermonuclear weapons), depending on how it is contained.

To give you a sense of how much energy we’re talking about, let’s compare the energy released by fusion to the energy released by hydrogen combustion, which is also a potentially explosive reaction (see: Hindenburg disaster). Fusing two atoms of hydrogen isotopes (tritium and deuterium, specifically) to form a helium atom will give you almost 6000 times more energy than you would get from burning a single molecule of hydrogen gas (H2). The activation barrier for the fusion reaction is very large, which explains why the reaction temperatures are in the millions of degrees, but if fusion could be done without such a huge energetic cost, it would revolutionize the energy industry. Excitement over this prospect has spawned a great deal of controversy in the past, and the search continues at IPP and elsewhere for a way to harness energy from fusion safely and efficiently.

Cable 10BEIJING263 also describes research at other CAS institutes, including the University of Science and Technology (USTC), on the topics of biometrics, nanotechnology, optical fibers, and quantum communication. I’ll be back with more information on each of these subjects. In the mean time, why don’t you try reading a few diplomatic cables on your own? Play the Mission Impossible theme song in the background, and I guarantee you’ll feel like a secret agent in no time.

What can art tell us about the mind? Previous
Are we there yet? Next 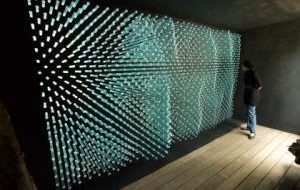