It’s all in your head: a review of The Belief Instinct by Jesse Bering

I’ve been a voracious reader lately—a cookie monster of the written word. It started with Mysteries of Pittsburgh by Michael Chabon, and continued with The World Without Us by Alan Weisman (which I reviewed here) alongside The Hunger Games by Suzanne Collins (yes, I am still a young adult, thank you very much). The latest to be devoured was The Belief Instinct by Dr. Jesse Bering.

I first found Dr. Bering’s work reading his often hilarious, always insightful blog Bering in Mind, and it was sci-love at first read. In The Belief Instinct, Bering investigates the genesis of humankind’s seeming instinct to believe in a higher power and tackles difficult questions: “Why do people often believe that natural disasters have meaning?” and “Why are humans, religious or not, so engrossed by the thought of an afterlife?”

This theorizing isn’t limited to other humans though, as perhaps it should be. We are all guilty, at one time or another, argues Bering, of theorizing about what the dog was thinking when she ate our homework, or why Hurricane Katrina devastated Louisiana. Wait, you say, there was no thinking involved in Hurricane Katrina’s landfall! But in fact, simply asking the question “Why?” presumes an intentioned mind behind the event. Otherwise, there is only the question of “How?” Well, you see, there’s a region of low pressure and.. Oh, sorry, that’s another post altogether.

Bering illustrates the fallacies associated with our theory of mind using personal anecdotes, along with descriptive accounts of his research. He describes his own feeling that, when thinking about his recently deceased mother, the sound of wind chimes were a comforting signal from her, all the while believing “without any tremor of agnostic hesitation” that his mother was in fact wholly entombed in her now deceased earthly form. He also recounts his “Princess Alice Studies” in which children were told that an invisible princess was in the room with them and would like to help them make the right choice. When the children then reached toward one of two choices, a piece of furniture or other inanimate object was rigged to fall, meant to be a sign from Princess Alice. As children got older, largely irrespective of their stated beliefs, they reacted more and more to these rigged events as intentional signals from that invisible royal presence.

To me, the most striking idea is how we might act differently in our beliefs and religion if we lacked a theory of mind all together. For that, Bering describes studies of the spirituality and supernatural beliefs of people on the autism spectrum, who are typically lacking in their abilities to understand the thoughts of others. Without many of these mind-theorizing capabilities, authors Temple Grandin and Edgar Schneider, both of whom have autism, have each developed a unique, rich religious ideology based on purely logical grounds. Neither speaks of God’s psyche or intentions in the realm of human experience. The Gods of Grandin and Schneider would not intentionally send a hurricane anywhere, except in that their Gods may have formed the underlying physical principles by which any hurricane forms.

Along these many lines, Bering deconstructs the way that belief manifests in the human brain. He argues that our nearly ubiquitous tendency toward belief in an intentional higher power is simply an evolutionary byproduct. Consider an early human who hears twigs snapping in an unfamiliar forest. Those prone to mistakenly guessing at stalking lions intent on eating them would occasionally be right and survive, whereas those who didn’t make that leap would likely perish. Today, similar misattributions can pertain instead to an intentional God wanting to punish the wicked with natural disasters. But as Bering says, “God is an inherent part of our natural cognitive systems, ridding ourselves of Him … would require a neurosurgeon, not a science teacher.” Far from asking us to toss aside our beliefs, The Belief Instinct simply opens our eyes to the genesis of belief and a higher power in our wonderfully complex minds. 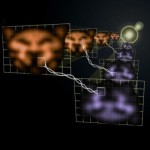