Goodbye to the Bevatron

A peak inside the Bevatron in 2009

The Lawrence Berkeley National Lab (LBNL) and staff say their final goodbyes to a special facility this month: the Bevatron. Opened in 1954, the Bevatron (otherwise known as Building 51) was an operational proton accelerator until 1993. In those 39 years, research at the Bevatron produced several Nobel Prizes, including the 1959 Prize to Emilio Segrè and Owen Chamberlain for the discovery of the antiproton.

At the time of construction, the Bevatron was the leading particle accelerator in the world! It cost a whopping $9 million to build (don’t ask about the demolition cost). Its ring measured 180 feet in diameter and its building occupied over 2.25 acres of ground at LBNL. Inside the ring were protons accelerated to kinetic energies of more than 6 billion electron-volts (BeV), thus the name Bevatron.

Today, the world’s largest and highest-energy accelerator is the Large Hadron Collider (LHC), located near Geneva, Switzerland. And the price tag on the LHC? A scant 9-Beva-dollars ($9 billion). With a ring 17 miles in circumference, the LHC can accelerate protons to kinetic energies of 3.5 trillion eV (TeV). Design and construction of the LHC also involved over 10,000 scientists and engineers from across the planet!

The remains of the Bevatron as of this week

And so, as we watch construction crews tear down the “puny” Bevatron, we are not only commemorating some of the world’s most amazing particle physics discoveries; we are also saying goodbye to an entire era of physics. There are a lot of questions left to answer in physics, especially about the origins of the universe and some of the principle equations that govern our world. But, to put it simply, today these questions take 103 times the effort–and dollars–to answer. That’s the difference between a “TeV” and a “BeV”.

Relative to many other science and engineering fields, this sort of dramatic leap is nearly unprecedented. Sure, bioengineers have cloned animals, but in my field, materials science, we still study the structure of steel. And steel is just a fancy term for iron alloys, which have been around since the “Iron Age” (1200 BC). We are also still learning how to optimally engineer quantum dots, which were first used to color window glass in the Medieval Age, over 500 years ago. Of course, the steel used in skyscrapers is hardly the iron once used in swords, and today we use quantum dots to harvest solar energy not just to fill the stained glass windows of churches–but you get my point.

The leaps and bounds that physics has made in the past half-century are 103 times more amazing than many of us appreciate on a daily basis. So I encourage you to take a second (that’s 103 milliseconds) to say farewell to the Bevatron, once the most impressive feat of human engineering (we didn’t even land on the Moon until 1969 — 15 years after the Bevatron started smashing protons together!), and think about just how amazing modern science is.

Graphene research at Cal: Close, but no Nobel Previous
Rotationplasty rocks! Next 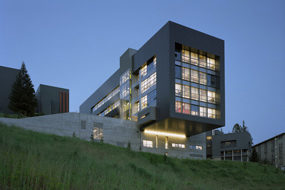