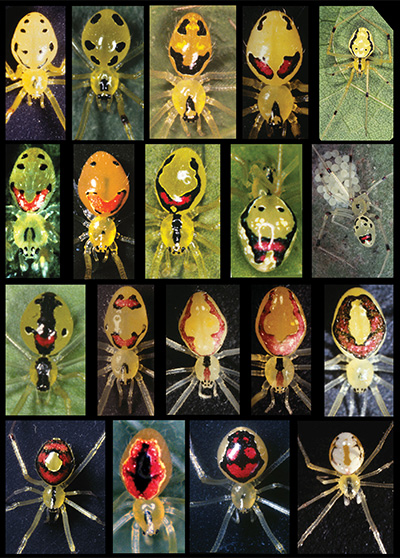 For biologists specializing in biodiversity, Hawaii is an ideal laboratory for studying ecology and evolution. How flies, spiders, and other critters made it to Hawaii, the most remote island archipelago in the world, remains mystifying. A single colonizing species of small fruit fly diversified into the nearly 1,000 species found in Hawaii today—over one quarter of Drosophila fruit fly species found worldwide. As species around the globe struggle to avoid extinction, this isolated, natural laboratory holds clues to understanding the processes that create and maintain biodiversity.

The islands of Hawaii arose in sequence over the last five million years as their respective volcanoes erupted and the resulting lava cooled. Terrestrial life colonized each new patch of land as the islands grew outwards and upwards, creating a geological timestamp of the arrival of a species based on location. Dr. Patrick O’Grady and Dr. Rosemary Gillespie of UC Berkeley study two groups of such colonizers—flies and spiders. Both O’Grady and Gillespie hope to address the pressing question of whether the sequence of colonizations by particular species on particular islands can help predict how species diversity develops over time.

Untangling the history of flies and spiders in Hawaii starts with a staple technique of biologists since Darwin—field collections. Armed with nets and collection vials, O’Grady sets out for the slopes of Hawaii’s famous volcanoes to collect specimens found nowhere else on Earth. Finding these small insects in dense vegetation requires knowledge of their biology and natural behavior.

“Catching flies can work one of two ways,” says O’Grady. “Most insects, when disturbed from their plants, fly against gravity and towards light, so you catch them in a net as they fly up. But, one group of Drosophila fruit flies is well-camouflaged and tends to fly with gravity and away from light—towards the ground. So you may be able to just pick them up off the ground.”

Spider collection, on the other hand, requires a high-powered headlamp and a well-trained eye to spot the glistening of spider webs, as nighttime collections are most successful. Hiking through dark forests, Gillespie’s team searches for happy-face spiders, easily recognizable thanks to their distinctive markings, as well as long-jawed spiders.

Advances in DNA sequencing have increased the efficiency of field efforts. “In the 1980s, you needed about a cup of spiders to sequence DNA,” Gillespie says. “Now you only need a little leg.” By describing the genetic relatedness of specimens from young patches of habitat to those from old patches of habitat, Gillespie and O’Grady have begun to better reconstruct the detailed ancestries of these organisms.

Gillespie and O’Grady have discovered that species variation does not always follow scientists’ intuition. You might expect to find more diversity within older lineages because those lineages have had more time to diversify. Yet O’Grady and his graduate students have found relatively young fly lineages, such as the long-legged flies, that have diversified rapidly, and relatively old groups that have remained remarkably similar to their founding species over millions of years.

Likewise, Gillespie has found that one or two colonizing species of Hawaiian long-jawed spiders diversified into over 50 species—some green, some pink, some yellow, and some that don’t even build webs—while the happy face spiders belong to a single species. But diversity can also exist within a single species, and the happy-face spiders can display a wide array of colorful markings. In fact, similar happy-face spider color variants have been reinvented independently on multiple islands. This suggests that common evolutionary pressures may influence how some spiders diversify on these islands.

Even in an isolated environment, nature defies easy classification. Even following the emergence of new genetic techniques, the fauna of the Hawaiian Islands have produced few rules and a lot of exceptions. Nevertheless, O’Grady and Gillespie’s persistent efforts have broadened our understanding of the diverse strategies that colonizing species have used to survive in Hawaii. Sorting out the history of these flies and spiders may shed light on the future of other species. While loss of biodiversity remains a challenge for ecologists to understand and for human communities to prevent, the isolated archipelago of Hawaii will continue to provide a real-world laboratory for understanding the complex history and resilience of its resident organisms.

Into Focus Previous
Radioactivity on Ice Next