Return of the Liverwort 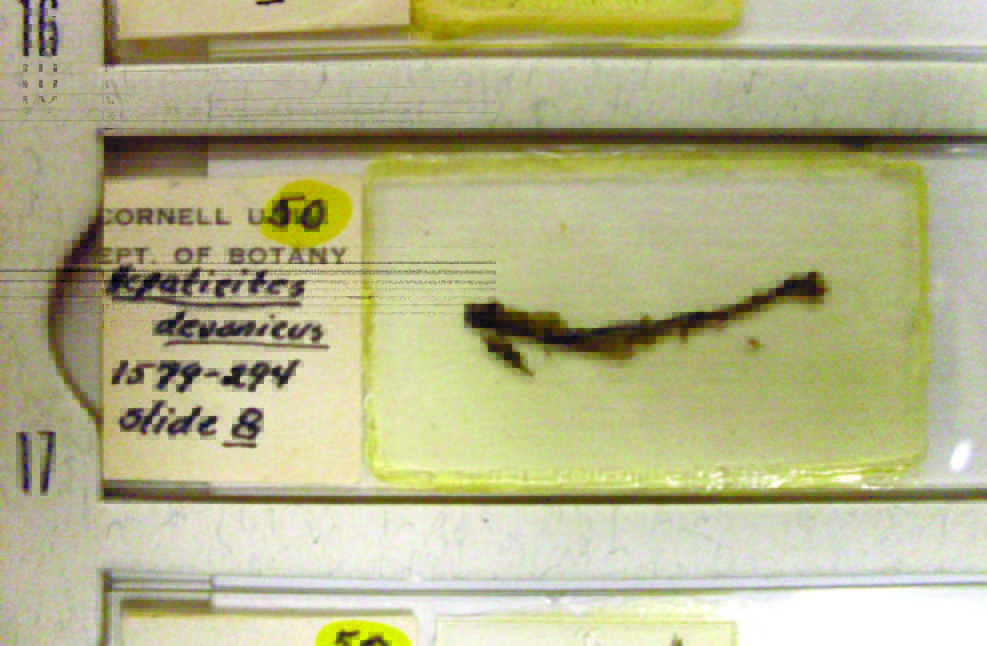 The colonization of land by green plants was like a moon landing. To make this leap, the ancestor of land plants evolved the biological equivalent of a space suit. Waxy cuticles, protective structures for young embryos, and ultra-violet light absorbing pigments were likely among the earliest adaptations to the harsh exposures of terrestrial life. Because these characteristics are shared across all land plants, we can infer with confidence that they were present in the first plants as well. However, other traits are found in only some, but not all, groups of early diverging plants – the mosses, hornworts and liverworts. In the absence of a fossil proto-plant, UC Berkeley scientists hope to resolve ambiguities about the order of land plant trait evolution by reconstructing the ancient characteristics of liverworts – the group most closely related to the ancestor of all land plants.

For over half a century, these microscope slides were the only specimens of liverwort Hepaticites devonicus
Credit: Susan Tremblay

Unfortunately, fossil liverworts are not easy to come by! Not only are fossils of these tiny, fragile plants extremely scarce, paleobotanists also frequently overlook these microfossils.  Befitting UC Berkeley’s reputation as champion to lost causes and underdogs, Susan Tremblay is on a quest to improve our knowledge of fossil liverworts. A liverwort specialist and graduate student in the Department of Integrative Biology, Tremblay has assembled at Berkeley the small handful of liverwort fossils formerly housed – and sometimes lost—in dusty museum drawers around the world.

Tremblay began her detective work by tracking down Hepaticites devonicus, the second oldest fossil liverwort ever found. Since it was described in 1961 by Fran Hueber, a Ph.D. student at Cornell, Tremblay says “no one has looked at the material to find more liverworts since he published his article 50 years ago. Even the 80 fragments that were mentioned in the paper appear to have been lost.” When Tremblay began her search, the only remaining evidence of H. devonicus were six exemplar fragments, embedded on microscope slides, that Hueber used to describe the species for the botanical literature.  Thus, it was impossible for Tremblay to use high-resolution microscopy techniques, such as transmission electron microscopy (TEM), that would damage or destroy the specimens.

Even worse, the source of Hueber’s liverwort fossils has been forever lost to history. When researchers returned to Hueber’s original site – a shale quarry in the Catskills Mountains of upstate New York – to look for more fossils, they discovered that it had been mined out for construction materials. “Any remaining liverwort fossils from that locality,” Tremblay says ruefully, “have ended up on road repairs around New York State.”

Fortunately, a recent reorganization of the Devonian collection at the Smithsonian National Museum of Natural History turned up a drawer full of the Cornell graduate student’s rock samples from that exact site. After hearing about the rediscovery this spring, Tremblay flew to Washington D.C. to confirm that these samples were indeed chock-full of fossil liverworts. She also brought the best-preserved rock fragments to UC Berkeley for further study.

One afternoon this past summer, Tremblay and I were the only people in the paleobotany lab in the Valley Life Sciences Building when, without warning, she pulled me over to the dissecting microscope. To my amazement and her delight, she was examining a plastic container filled with 375 million-year-old liverwort fossils.

Cell walls are distinguishable in the 385-million-year-old fossils of Metzgeriothallus sharonae, the oldest liverwort found to date.

Tremblay’s “eureka!” moment came after many weeks spent in UC Berkeley’s Museum of Paleontology perfecting a technique for extracting ancient liverwort fossils from their rock matrix. The hydrofluoric acid (HF) used to dissolve the rock is highly toxic, causing deep burns on contact and even cardiac arrest (due to interference with the body’s calcium metabolism).  For safe handling, Tremblay created what she calls the “French fryer technique.” Shale-embedded fossils are placed into plastic sieve containers and lowered into a series of acid and water rinses, keeping the scientist’s hands away from corrosive chemical splashes.  Conveniently, the HF dissolves only rock, leaving behind organic fossils. Looking into the microscope, even my unpracticed eye could distinguish the ancient cellular structures of liverworts from other floating pieces of debris.

After the success of Tremblay’s French fryer technique, she and a collaborator from the New York State Museum are now collecting more samples at another quarry in the Catskills. The fossils at their fieldsite are spectacularly preserved and even older than those rediscovered at the Smithsonian. These fossils are the oldest known for liverworts, dating to 380 million years ago (mya). Tremblay showed me photographs of her liverworts – both modern and ancient –magnified under a microscope. Placed side-by-side, the characteristic traits –  toothed margins, cell walls, and organelles – of the ancient fossils are just as detailed and intact as her fresh samples. Using the French fryer technique, Tremblay has multiplied the number of Devonian liverwort fossils available to science from a few handfuls to many dozens of slides now housed at the UC Berkeley Museum of Paleontology.

Close inspection of the fossils led Tremblay to discover that her specimens have an unexpectedly complex morphology. All early liverwort fossils found up until now have branched in a simple, dichotomous pattern. That is to say, they only split into branches in pairs. Instead, Tremblay found evidence of secondary branching, with new branches growing in between two branches.  This new finding is significant because, according to Tremblay, “this particular type of branching is found in a lineage that had not yet diverged as far as we know.” Her finding suggests that this type of secondary branching was an ancestral characteristic. Alternatively, the lineage with this type of branching could have already evolved, suggesting that the molecular dating of the liverwort lineages is incorrect.

A microscope image of a modern Calypogeia liverwort shows the level of cellular detail available when examining a fresh sample.
Credit: Susan Tremblay

Another big surprise came when she happened upon a tiny, stalked sac attached to one of her fossils. Tremblay believes it may be an ancient insect egg sac. If confirmed by colleagues at the Smithsonian, this discovery  may represent very early evidence of an ecological interaction between insects and liverworts.

Even with these unexpected discoveries, Tremblay still has her fingers crossed for hitting the paleobotanical jackpot:  finding a fossil liverwort with attached spores. Like mosses and ferns, liverworts disperse not with seeds, but with unicellular spores. Finding a specimen with in situ spores is a “holy grail” for researchers who study the rise of early plants. This is because, Tremblay says, “spores are found throughout the early land plant period, including 40 million years before other plant parts are found.”  Spores are very well-preserved in fossil record due to their tough, desiccation-resistant coating. However, the reproductive structure where spores are produced on liverworts is short-lived and not usually preserved along with the rest of the vegetative body. If Tremblay’s search is successful, she may be able to establish whether this ancient abundance of spores belongs to liverworts or some other early group of plants.

Even if these ancient spore-bearing structures remain elusive, Tremblay is excited by the new findings. She says, “Liverwort fossils are so rare that the new structures are extremely valuable for placing the fossils in the phylogeny and revealing the primitive states of [plant traits].” With a little detective work, her fossils have already revealed that the oldest known liverworts are more morphologically and ecologically complex than previously thought.

Kermit in Crisis Previous
Sweet on Biofuels Next