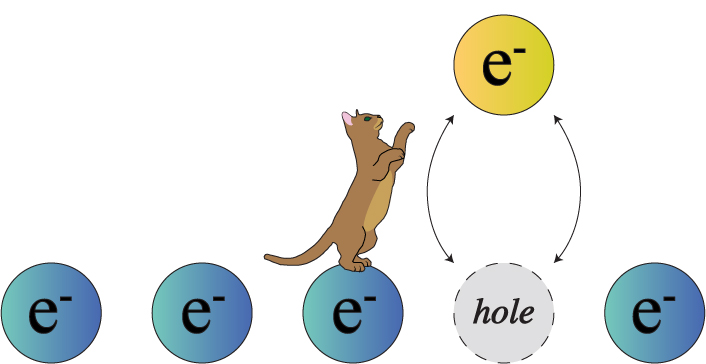 In 1935, the famous quantum physicist Erwin Schrödinger proposed a thought experiment. He imagined a cat sealed in a box with a poison-dispensing device that would kill the cat if triggered. The trigger is an unpredictable event, such as whether a radioactive atom releases radiation over a certain span of time. Without opening the box, it’s impossible to know whether the cat is alive or dead. Schrödinger suggested that the cat should be considered half-dead and half-alive, something he called a state of superposition. Now, scientists at UC Berkeley have come up with a method to test this thought experiment in the real world—without, of course, harming a single feline.

In search of a way to test this thought experiment, the researchers thought small—even smaller than a single atom. In fact, atoms are made up of several subatomic pieces, and the core at the center of every atom is orbited by one or more tiny particles called electrons. These electrons can do far more than just passively hang around an atom’s core. When the right amount of energy is transferred to an electron—for example, by a collision between the electron and a particle of light, called a photon—the electron is said to enter a higher energy state. In the electron’s original place, a positively charged hole is left. Since the hole is positively charged, it attracts the negatively charged electron. The electron–hole pair is called an exciton, an exotic phenomenon that lasts just billionths of a second before it transforms into an ordinary photon.

Excitons have properties that make them great candidates for mimicking Schrödinger’s thought experiment, so in Professor Feng Wang’s lab in UC Berkeley’s Department of Physics, postdoctoral fellow Dr. Jason Horng and I designed a setup to study them. In these experiments, we shine a laser into a cavity, which is designed to act like two parallel mirrors, causing the photons that make up the laser beam to bounce back and forth. The cavity also contains excitons, which themselves will form photons that can bump into other electrons, creating even more excitons.

The change between photon and exciton happens so rapidly that it’s not possible to distinguish whether an observed particle is a photon or an exciton: the two forms are superposed to form something new, called an exciton–polariton. This superposition state is half-exciton and half-photon, just as Schrödinger’s cat is half-dead and half-alive.

One of the keys to the Wang lab’s success with this setup is using a recently discovered material: pieces of tungsten disulfide that are only one atom thick as the exciton source. This nearly two-dimensional material allows the electron–hole pairs to stay tightly associated. When the laser is shined into the cavity, a special channel confines the light to a particular region, allowing the photon to interact with the exciton and create the polariton state. “They have no choices. The photon and exciton have to interact in our scheme,” says Horng.

The results could lead to advances in both technology and basic science. For example, one could potentially create a polariton laser from this scheme, which might have a faster response and be more energy-efficient than other lasers. Another potential application for polaritons could be to use them as different forms of input and output signals in computing. Traditionally, electrical gates control the input and output in a computer, but light could also be used to create a different kind of output that takes advantage of the exciton–polariton pair. Schrödinger’s cat need not remain trapped in a box or even in the laboratory—as these applications show, it has the potential to explore the world.

Chung-Kuan (Andy) Lin is a second year graduate student interested in how atoms and materials interact with light. He enjoys various kinds of outdoor activities, and he is also a licensed lifeguard.

Breaking barriers Previous
Book Review — A Most Improbable Journey: A Big History... Next